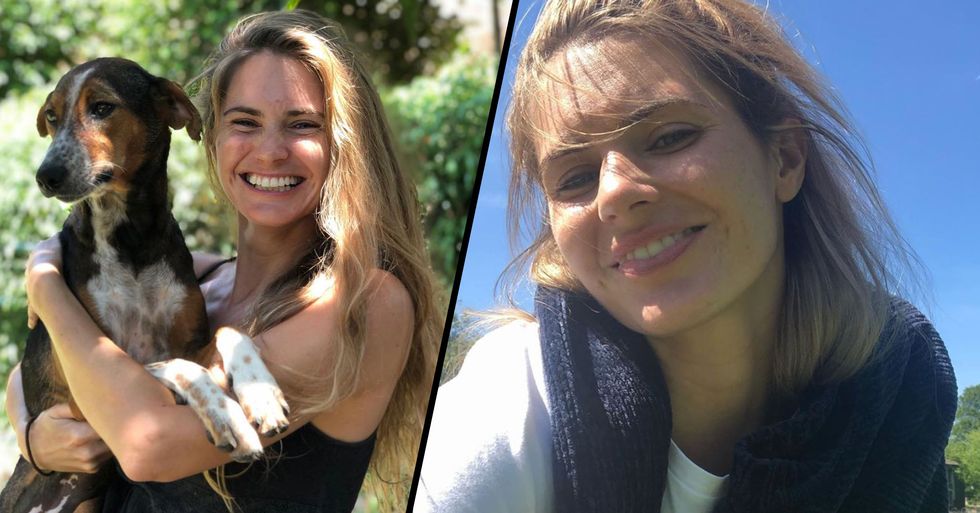 After breaking up with her boyfriend at the airport hours before boarding a plane to Sri Lanka, a woman decided to turn a bad situation into a life-changing one.

Keep scrolling for the full, and remarkably inspiring story...

When it comes to relationships, there are many significant milestones.

Saying the first "I love you"s, renting an apartment together, getting a first shared pet... The list could go on.

But, for many, the first vacation is one of the more significant markers in a relationship.

Going on vacation for the first time can be a huge deal for some couples, and many see it as a true test of how strong their relationship really is.

Because, if a couple can survive the stress of airport check-ins and missing luggage...

They can survive anything, right?

But some couples take vacations to repair their relationship...

In the hope that a little sunshine and relaxation will solve any ongoing issues that they're going through.

But what happens when this doesn't work?

And what happens if you and your partner break up before even boarding the flight?

I know, it isn't worth thinking about, is it?

Well, it has actually happened and, for one woman, it transformed her life for the better.

Janey Lowes turned a bad experience into a life-changing one.

5 years ago, Janey, from Newcastle, United Kingdom, was working as a vet and living with her long-term boyfriend, Alex.

They had a comfortable life together.

Janey, who had always wanted to be a vet after growing up on a farm, had the career of her dreams, a nice car, and a beautiful house.

But something wasn't quite right.

Her relationship with Alex, who she'd been with since she was fourteen, started to decline after they had moved in together.

Like it does with many couples, working life had begun taking its toll on their relationship.

Speaking about her experience, Janey explained: "On the outside, we had everything, a seemingly enviable and glamorous lifestyle. But I’d come home tired and stressed, and he’d be exhausted from playing rugby full time. It was like the fun was over and we needed to shake things up."

So, in a bid to save their relationship, they booked a holiday to Sri Lanka.

But they ended up breaking up there and then at the airport... Before they'd even boarded the plane.

Yet, despite their sudden break-up...

They decided to continue with their vacation anyway, just as friends rather than boyfriend and girlfriend.

But, while trying to enjoy her vacation...

Janey couldn't help but be distracted by one thing, and it wasn't her failed relationship.

It was Sri Lanka's many stray dogs.

As a vet and a devoted dog-lover, Janey couldn't help but notice the high number of injured and diseased dogs living on the streets. "The healthy ones seemed happy enough roaming the streets, but all too often they were mange-ridden or injured. Their soulful eyes followed me as if asking for help."

And it was these dogs who made Janey realize what she truly wanted out of life.

She explained: "With Alex and I now split, it would have been easy to move out and carry on with my nice comfortable life, but I realized there was nothing tying me down now. Why not go to Sri Lanka and start treating these animals?

Janey decided that she had to stay in Sri Lanka to help these desperate pooches.

And, after briefly returning to the U.K. to gather her things...

Janey flew back out to Sri Lanka, where she planned on living and working as a vet for one year. "I tied up the loose ends of my life, sold my car and booked my flight for October 2014. Along with my clothes, I packed surgical kits, bandaging, and Manuka honey, which can help with wound management."

Upon her arrival, Janey immediately set to work.

She moved back to the surfing retreat where she had stayed during her first visit, and it was here where she first set up her charity, WECare Worldwide, a non-profit that provides basic veterinary care to all street dogs in Sri Lanka.

Janey threw everything into her charity...

And, while treating as many injured dogs as she could, she also worked on growing the charity as a brand and getting her message out to the world. "Making the charity a success became my focus. As well as treating the dogs, I taught myself how to build a website, how to fundraise, generate publicity, and all the other things you never think about."

Janey now lives permanently in Sri Lanka, and her charity is thriving. "I went from having one tuk-tuk driver to now employing 17 members of staff, including five vets, three nurses and several trainees."

It hasn't all been smooth sailing...

Janey admits that there have been major downsides to her change in lifestyle, explaining: "I am frequently bitten by dogs, including some with rabies, so I’ve needed jabs that have sometimes made me sick. I’ve contracted mange, as well as ringworm, which isn’t nice. I’ve suffered abuse from locals who think I am mad."

Janey's life is a far cry from what it used to be, but she wouldn't change it for the world. "I live in a simple beach bungalow, with a lean-to kitchen, camping hob and sadly, rats. Surfing is my therapy, I try to go every day... I have also adopted five dogs called Mali, Benji, Stitch, Lottie, and Tilly."

She briefly goes back to the U.K twice a year...

To both visit her friends and family and to fundraise for the charity.

Oh, and to indulge in a little western pampering, of course.

"I’ll go to the dentist, hairdresser and get my legs waxed at the same time. My priorities have changed. I haven’t used a hairdryer or worn make-up during the day for years."

And, speaking about when people call her selfless, she explained, "I’d like to expand our charity across Sri Lanka and open clinics in other parts of Asia. People have described me as selfless, but I love what I do and get to spend time with animals every day. I get as much back from these dogs as I give them, I feel so lucky." If you'd like to donate to Janey's charity, you can do so here.

When on vacation, it can be difficult to resist falling in love with a stray dog...

And one woman, who was holidaying in Turkey, simply couldn't leave one of the street dogs behind. Keep scrolling to hear just how she managed to bring the pooch home...