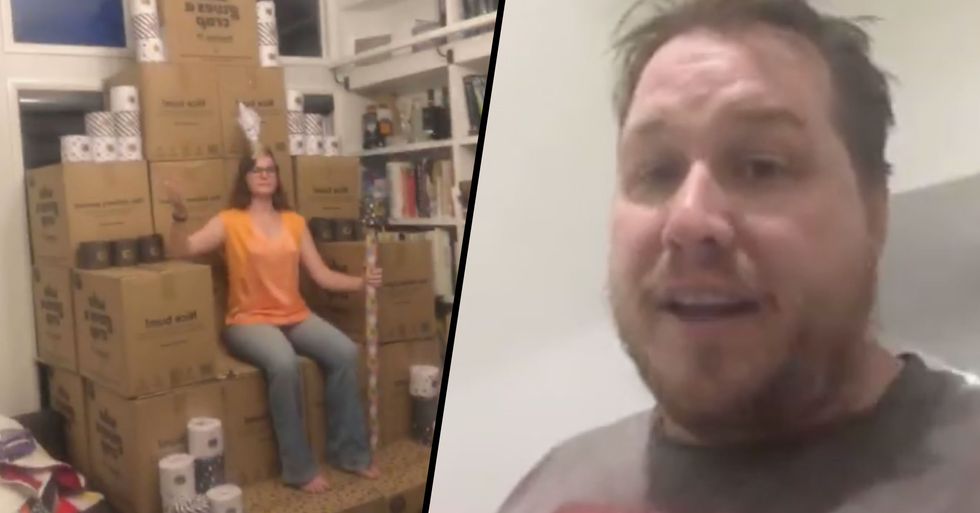 The coronavirus has seen the world stock up on unnecessary amounts of the essentials, including canned food and hand sanitizer, that can't be made quick enough for the increased demand. However, studies show there is a reason we overprepare when it comes to pandemics.

One other essential that has been in short supply, is toilet roll. Even before the mad rush to stock up, this couple made the most hilarious mistake when it came to ordering the rolls.

Keep scrolling to see the video of what they made...

People are resorting to extremes.

Compared to past pandemics, the coronavirus is definitely up there with causing the most widespread panic.

There's still a lot unknown about the virus.

"When people are told something dangerous is coming, but all you need to do is wash your hands, the action doesn't seem proportionate to the threat," said Steven Taylor, a clinical psychologist and author of "The Psychology of Pandemics." "Special danger needs special precautions."

There's been a lack of information and direction from officials.

Mixing that with the soft quarantine regulations at the start of the breakout, it's understandable why people have gone to extremes.

Social media is a huge player.

Images of empty shelves and people mass buying have been scattered all over the internet.

This is what causes people to panic.

When they see other people stocking up on the essentials, it sets off a chain of panic buyers that assume because someone else is doing it, they have to too.

It's natural to want to prepare.

But people have started to enter into a survivalist psychology, where they are spending as much time as possible inside, so need to stock up on everything.

One couple did this way before it became the norm.

And it was a complete accident.

It was delivered to their home in Australia.

Chris and Haidee Janetzki, who live with their 4 kids, said they were shocked when they received a delivery of toilet roll.

They had ordered wayy more than expected.

It turns out they ordered forty-eight boxes of toilet paper, compared to the forty-eight rolls they were expecting to receive.

They quickly realised their mistake.

The little mishap cost them a whopping $3260.

Luckily the family saw the funny side.

They even decided to create something with the endless boxes of toilet rolls.

They created an enviable throne.

Haidee can be seen donning a toilet roll sceptre and crown while sitting atop their magnificent creation.

They even had some leftover.

With the remaining boxes, the family created a wall in their garage, which shows how much toilet roll they have been landed with.

Haidee spoke up about the accident.

She told ABC News: "It asked for the quantity and I wrote 48 thinking I want a box with 48 rolls in it. A couple of days later, I got an email saying the order was on the way, and that was all good. On a Monday there was a knock at the door at it was the courier. He said, 'I've got two pallets of toilet paper for you. We checked the credit card statement to try to figure out what'd gone wrong and turned out I'd ordered 48 boxes, so it was legitimately my mistake."

It's going to take how long?!

They've set up a fundraiser.

They thought it'd be a good idea to set up the "Very Cr*ppy Fundraiser" where they are selling the rolls to help fund their daughter's school trip to Sydney and Canberra.

The company has offered the family a refund.

But by the time the company got in contact, they had already get up the fundraiser, so decided to "roll" with it. Sorry.

The family made the order before people started panic buying.

Photos of Australian supermarkets show empty shelves much like the rest of the world, where people have rushed to purchase as many bulk items as they can.

"I'm a pastor of a church and so a friend said, 'How prophetic are you to be able to see the future and know there was going to be a toilet paper shortage?'" Well, that's handy.

At least they're all set for the next couple of years.

Through all the bad news, it's nice to see people making the best out of a bad situation. Keep scrolling to see the latest updates on the Coronavirus.