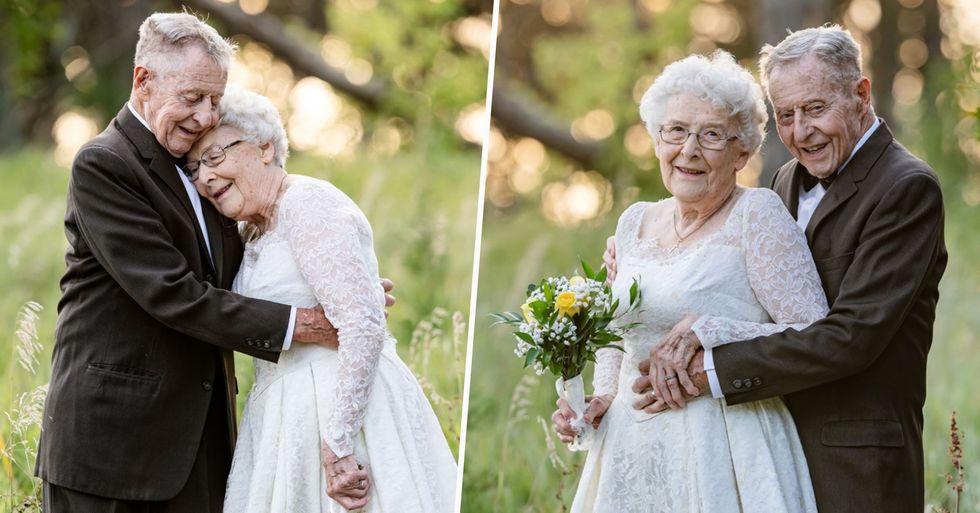 Reactions have been pouring in online after a couple went viral for a 60th-anniversary photoshoot taken in their original wedding attire.

The photoshoot is the most heartwarming thing we've ever seen...

Marvin and Lucille Stone are one of those couples who have truly stood the test of time.

The pair, who are eighty-eight and eighty-one respectively, have just celebrated their 60th wedding anniversary.

The couple first tied the knot in 1960 at a small Lutheran Church in Sterling, Nebraska.

Marvin was nearly twenty-nine-years-old at the time, while Lucille was twenty-two-years-old. The pair went on to have 3 children during their marriage.

Their wedding day was everything they could have imagined.

"It was a typical wedding. We had a pastor who was in his first ceremony wedding... and he was a little shook but he did it and we were married," said Marvin. "My dad cried. He was the only one that cried," Lucille added. "My mother beamed and they both thought Marvin was just perfect, and that does help when your parents like the person that you’re marrying."

According to Marvin, the pair are a match made in heaven.

"We both had farm backgrounds. We both were free enterprise people and we had similar goals in life and we were both in teaching," he said. "We had already been in teaching for a while and we were just kind of together in our concepts of what to do and what direction to go and so forth."

6 decades later, and their love still remains as strong as ever.

"We don’t always agree but we have the main focus that we’ve always had, so it just kind of moves along," Marvin told KHGI-TV. "We have had similar values and so it has worked out pretty well and, I don't know, we never spent any time considering separating."

"You do what you have to do and by no means have we been perfect in our marriage. We’ve had arguments. We’ve had disagreements, but on the big things we’re pretty much on the same track."

In honour of their 60th anniversary, the couple decided to have a photoshoot.

But these were no ordinary photos.

Taken by Katie Autry Photography, the photographs capture the couple in their original wedding attire from 6 decades earlier.

The pictures are simply stunning, meaning it comes as no surprise that reactions came flooding in as soon as Katie posted them to her Facebook Page.

So, without further ado...

Let's take a look at the full photoshoot.

Photographer, Katie, shared all the snaps to her Facebook page.

"I had the pleasure of working with Marvin and Lucille to celebrate their 60th wedding anniversary," she began.

"This may be one of my favorite sessions to date."

"These 2 lovebirds even wore their original wedding attire for the session."

Katie asked the couple what their secret to a long and happy marriage is.

"When I asked them both what their secret to a lasting marriage was they had the following advice. 1. Work hard 2. Be kind to one another 3. Think before you speak 4. Rely on each others strengths to overcome your weakness 5. Stay strong in your faith."

Katie also revealed that Lucille made her own wedding dress.

"The thing that took the longest was making fifty-two buttons that are on the sleeves and down the back," Lucille told KHGI-TV. That's one talented lady!

Here's a close up of the rings.

The couple are clearly still so in love with each other.

Among all the negativity in the world, this is the kind of thing that is amazing to see.

Here's a close up of the groom.

And here's the stunning bride.

As mentioned before, Lucille wore a lace gown that she sewed together by hand.

"What an amazing example these 2 are of true love standing the test of time," Katie continued.

"I am so glad to have met them, and honored to have captured these memories for them. Happy Anniversary Marvin and Lucille !! Cheers."

You can check out Katie's photography page here.