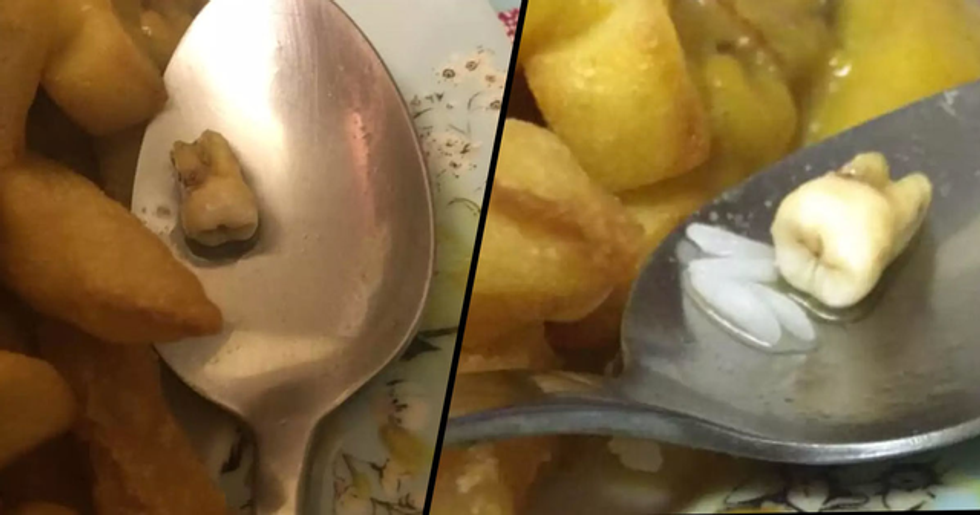 Couple Claim They Found Human ‘Tooth’ in Their Chinese Takeout

Let me set the scene:

You've had a long day at work, you finally get home, you sit back, relax, and order your favorite Chinese takeout. The food arrives, it smells delicious, you hastily tuck in... Oh, but hold on a second... There's something in your mouth that feels, and tastes, a little different from your usual chow mein noodles.

Now, while this sounds like something out of a badly-written horror movie, this actually happened to one unsuspecting couple as they were tucking into their takeout. As the pair, from the U.K., were eating their Chinese takeout, one of them found what looks like a human tooth buried amongst their pork curry. Disgusting, I know.

Keep scrolling to read the full story, and to hear how the restaurant responded...

Sometimes, after a long, hard day...

Or if you're feeling especially lazy, a good old takeout is a must.

There are moments in life when you just can't face the prospect of cooking.

Why slave over an oven when you can get delicious food delivered right to your doorstep?

Well, one British couple had this thought exactly.

Stephanie McDonough, from Warwickshire, U.K., had sat down with her boyfriend, Dave Burrows, for a night in front of the TV with a takeout. Sounds pretty good so far, right?

Unbeknown to them, things were about to take a turn for the worst.

The couple had ordered their evening meal from their usual local Chinese restaurant, Newtown Cantonese Takeaway in Worcester.

The restaurant has a star rating of 4.7 on Google

Which is a pretty decent score for takeout standards.

So, obviously, the couple had nothing to worry about.

And thus, they went on to order around $21 worth of food from the restaurant.

And, like we all do when an eagerly-anticipated take out finally arrives, they hastily delved into their meals.

But, while Dave was enjoying his pork curry...

He suddenly bit down onto something quite peculiar.

The mystery item in his mouth was far too solid to be a piece of pork...

Or a piece of anything typically found in curry, for that matter.

So Dave spat out whatever was in his mouth...

Only to find a whole human tooth on his plate.

Dave genuinely had, what appears to be, someone else's tooth in his mouth.

Understandably, the couple was repulsed.

And immediately rang up the Chinese takeaway to complain about what they had found.

However, the restaurant owners were not having it.

Stephanie claims that the bosses insisted that the "human tooth" was simply animal gristle, or maybe a piece of onion. I mean, just take a look at the picture above and decide for yourselves...

The restaurant owners gave a valiant attempt at disguising the tooth as something else...

"I phoned the restaurant later that night and the manager really tried to convince me it was gristle in the pork. She was having none of it. She was trying to come up with different things that it could have been. It was a tooth." Stephanie explained.

And they didn't even give a full refund.

Horrific! The couple said they had the cost of the curry reimbursed (roughly $7), but not the total of their bill.

But the money isn't their biggest concern.

"It's more a concern of how it got there. Was it spat in there or fell? I'm 90 percent sure it's a human tooth. It could have come from their food suppliers or wherever." Stephanie said. "I feel so sick, it's vile."

In her post, which has now been shared more than 5,000 times, the m0m-of-one wrote, "DO NOT USE NEWTOWN CHINESE WORCESTER!!!"

And, obviously, some people found the funny side.

The tooth puns came out in full force, with one social media user commenting, "Might have been put there to give the meal a bit more bite." And some simply tried to see the bright side in things, with one optimistic, and slightly bizarre, Facebooker writing, "It’s like the prize you used to get in the cereal box."

The couple has since reported the restaurant to the Food Standards Agency...

And they have frozen the curry and the tooth to preserve the evidence. According to the Worcester News, a city council spokesman said Worcestershire Regulatory Services inspectors are now investigating the incident and will be visiting Newtown Cantonese Takeaway imminently.