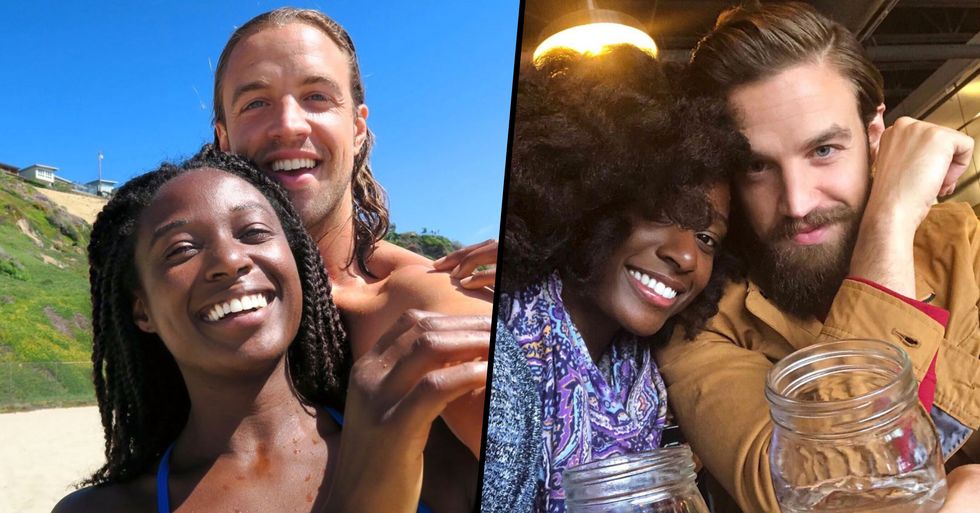 This is truly a life-lesson for all serious relationships...

There's no denying that.

This is a story of one couple whose photo went viral...

And they just couldn't figure out why... until they made a huge realization.

This is Dan and Wendy Hennesey...

And they are the literal definition of couple goals.

The health and fitness advocates met over a decade ago.

Before they became Instagram-famous, the couple met far before social media started to bloom and boom. But health and wellness were always something on their radar, even before they met.

In 2006, Wendy was studying for her Master’s Degree in Public Administration with a specialization and focus in health care...

And Dan was on his own path to figuring out the best health and wellness regime for himself. He was on the basketball team in college and when he started studying Exercise Science, he came across Wendy on the brand-new Facebook.

Dan was the one to drop this "beautiful girl" a message on Facebook.

As soon as she saw the message, her immediate thoughts were, "I don’t know you, I did not trust the internet, people from the internet… but he was still cute."

Explaining their story on their YouTube channel, the couple spoke about how back then, meeting on the internet was "taboo."

But Wendy did a little bit of "stalking" and she realized that Dan was connected to her via several school friends... so he seemed like a normal person!

When the pair started talking, they seemed to really hit it off...

And for the day they finally met, Dan planned a party, especially so there wouldn't be any awkward tensions. How cute!

Dan's immediate thoughts were, "She looked way better than her pictures."

Which truly meant something since back then there were no such things as filters. Dan was amazed by Wendy’s true beauty just as equally as she was amazed by his amazing smile.

It wasn't until a few months later when the pair really started to work on their relationship.

After a few weeks of no communication at all, they reconnected on Dan's birthday and Dan took her out for dinner.

They found that their connection was "so rare and so strong"...

And they spent the next 7 years of their life dating.

But as many long-term couples have experienced, Wendy and Dan found a shift in their relationship a few years in.

"When you’re eighteen, nineteen, twenty in that area, and you meet somebody? I feel in my personal experience, you change so much from age twenty to twenty-five, and every year along the way," explained Dan in a video on Wendy’s YouTube channel. "And even if you grow with someone, it’s still easy to get lost as an individual."

So while their relationship might have been really great for a while...

Wendy and Dan had somehow lost who they really were as individual people along the way. After being with each other for such a transitional period of their life, it seemed like they were each caught in a storm of fog, making their vision of the world and their own personal self difficult to capture.

Dan eventually fell down a rabbit hole that he couldn't get out of.

"I was very depressed for a very long period of time. Due to a lot of different things. Work, stress, etc.… It really weighed on me and it affected us. And it wasn’t who I really was." The couple still cared deeply about each other, but neither of them was happy with their own lives at that point.

Wendy bought Dan a "break-up gift" as a last little piece of advice - a book called Conversations with God by Neale Donald Walsch. And even though Dan wasn't much of a reader, he trusted Wendy's advice and spent 10 hours one evening listening to the audio-book version.

This was a huge wake-up call for Dan...

And after spending almost a year getting his life back on track, he and Wendy reconciled because they were just meant to be together.

And they finally tied the knot.

But just a few months before their wedding day, Wendy decided to share an adorable before and after post in aid of their 10 year anniversary.

But to Wendy's surprise...

Over 60,000 people reacted to the post and she just couldn't figure out why!

Once the shock and confusion had settled down, they finally understood exactly why people were going crazy over their photo.

Their relationship has taught them that for good things to happen, you need to be open for them to happen. But more importantly, you need to be ready to fall down before you finally make it to the top. Dan’s advice on a healthy, happy lifestyle, especially when it comes to dating is, "Meet people. Take risks. And definitely have to be willing to come with some dead ends once in a while."

It wasn’t until they had gotten back together that they realized:

"We really found who we were through that process of not having each other." And together they learned the secret to their success as a couple.

Truly inspiring! For more, keep on reading about the study that shows how men need 4 months in a relationship before they can share food with a partner...