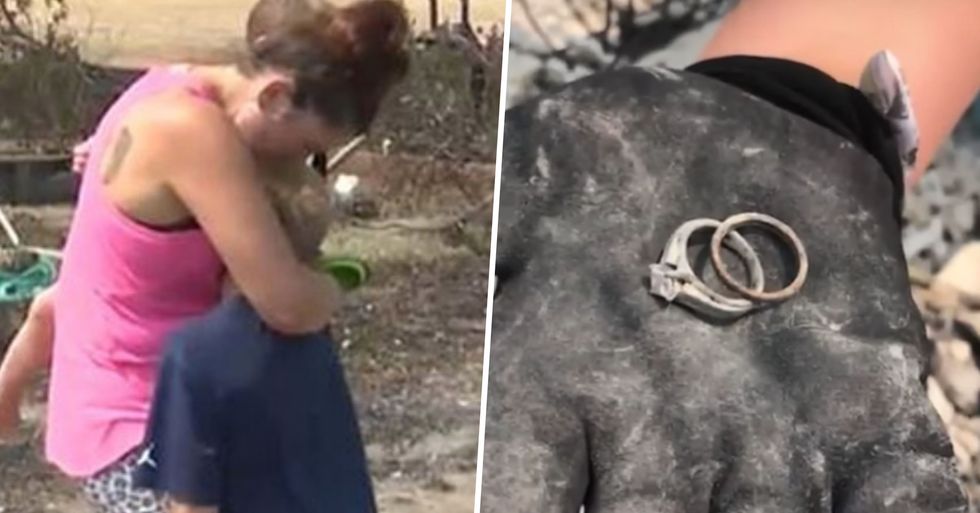 A couple has miraculously found their wedding rings among the remains of their wildfire-destroyed home in California.

Keep on reading to check out this amazing discovery...

The deadly flames have so far burnt over 1 million acres and sadly, there is no end in sight.

But amongst the constant turmoil and devastation...

There is a small glimmer of hope.

Countless volunteers have been working hard together to help restore damaged homes and care for those who have been left with nothing...

And a recent story of a married couple who lost their home has been warming the hearts of the nation.

Last Wednesday, Jason and Chloe Caroll were forced to flee their property in Vacaville, northeast of San Francisco.

The LNU Lightning Complex fire tore toward them, engulfing their entire home. "It looked like a tornado of flames. I have just never seen something move so fast… The flames were taller than trees," Chloe said in an interview with KCRA on Saturday.

They were able to evacuate safely with their 2 sons...

But their family home was completely destroyed, engulfing all of their personal possessions. "I just watched it all burning down,' an emotional Chloe stated, adding that the home had been in her family for more than thirty-five years. "I just thought of everything. My kids' ultrasound photos. My kids' footprints from their birth."

Jason and Chloe's wedding rings were also in the house when they fleed...

But when the couple returned forty-eight hours later with some family members to try and move through the rubble, they made the most unbelievable discovery.

"I just started screaming, 'We found it! We found it! I told you we would find it!" the aunt, Denise Pennington, said.

Chloe strongly believed the wedding rings would have been "melted down to nothing."

Chloe says the rings will help her as she faces a long and painful rebuilding process.

We hope that Jason, Chloe, and their family will find peace soon...

And we hope their journey to rebuilding their home will happen soon. Keep on scrolling to read about the Australian firefighters who are set to come and help here in California...