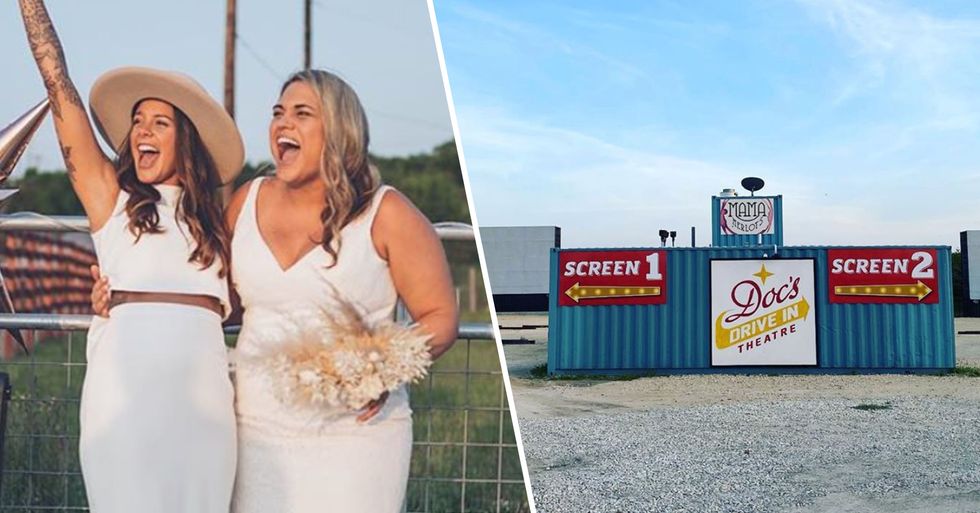 Love is something we all want in our lives. If you're in lockdown with someone you love, you should treasure every second, even if they get on your nerves more often than not.

One couple from Austin, Texas decided they weren't going to let a pandemic get in the way of their special day, which prompted them to do something completely out of the ordinary.

Many people aim for that happy relationship.

And for many women in particular, the marriage fantasy is something they spend a lot of time planning for.

But others favor a... different route.

Going for a more unique wedding is always a sure-fire way to make it a day to remember - and ensures your wedding will be able to stand out from the crowd.

And while many wish to keep the general ceremony traditional...

In the current climate, getting married is a trickier concept than usual.

And one couple really thought outside the box.

A couple in Austin, Texas managed to have a socially distanced wedding this week.

This is Bri and Lindsey Leaverton...

From the first day they met, they've been living life spontaneously.

Within just 12 hours of matching on a dating site in 2018, they went on their first date...

3 days later, they became girlfriends. They had always planned to marry on April 10 of this year, Good Friday, ever since they got engaged.

Lindsey said: "We had everything planned down to a tee. We were supposed to get married on April 10, 2020, Good Friday because nothing says 'Happy Easter' like a good old lesbian wedding."

But just weeks before their wedding, Austin laid down quarantine restrictions.

After that, their guest list plummeted and they realized their happy ever after wasn't going to go to plan.

Although this made Bri and Lindsey realize they didn’t want to wait until who knows when to get married.

And that's when their wedding planner came up with the most unique plan...

“Our wedding planner had this crazy idea: What if we did this at a drive-in movie theater? She said, 'I feel like that suits you guys,'" Lindsey said.

Due to their local drive-in theater being closed they had to search a little further afield, where they found Doc’s Drive-In Theatre in nearby Buda, just south of Austin.

The theater sells food for pickup, which is how they've managed to remain open, being classed as an essential business.

So without hesitation, they gave them a call...

“We asked them, ‘How crazy would it be if we got married there?’ and they said ‘Absolutely," said Bri.

Their friends and family were immediately on board with the unusual wedding.

“They said, resoundingly, ‘This is so you, this is so Bri and Lindsey.’ We asked everybody to come in their PJs, and to decorate their cars, so our straight friends were putting rainbows on their cars," said Lindsey.

They had almost maxed-out the theater with eighty-five cars turning up to the ninety car limit venue. Guests stayed in their cars for the entire event.

It was everything they'd hoped for...

The couple called on their original videographer to help them Livestream the wedding to social media, so friends and family who couldn't come could still witness the wedding.

All around you could hear a chorus of car horns, flashing lights, and even a cowbell which Lindsey calls “the new applause." Afterward, Bri was surprised with an original song performed by Lindsey, who was part of the Christian music industry until coming out in 2009.

Though there were some difficult challenges to overcome...

“It was crushing to not be able to hug my parents," Lindsey said. “My dad’s my best friend. I’ve always dreamed of him walking me down the aisle, having the daddy-daughter dance. Having to air hug him and my mom from the car was really, really hard, but at least they were there." Due to virus risks, Bri’s three-and-a-half-year-old son, Atlas was unable to attend, so instead stayed with Bri's co-parent.

They still said It was still the best impromptu wedding the could have ever dreamed of...

“It was one of the most connected moments I’ve ever felt," Lindsey said. “I thought it would be disconnected, but we got to wave at people as we left the venue. It was almost surreal how engaged and connected it made everyone feel at one of the most disconnected times of our lives." Keep scrolling to find out how one woman ensured her grandma could see her on her wedding day... Get your tissues ready!