Couple Pay $4,500 to Bring Stay Dog Home After Finding Him in Barbados | 22 Words 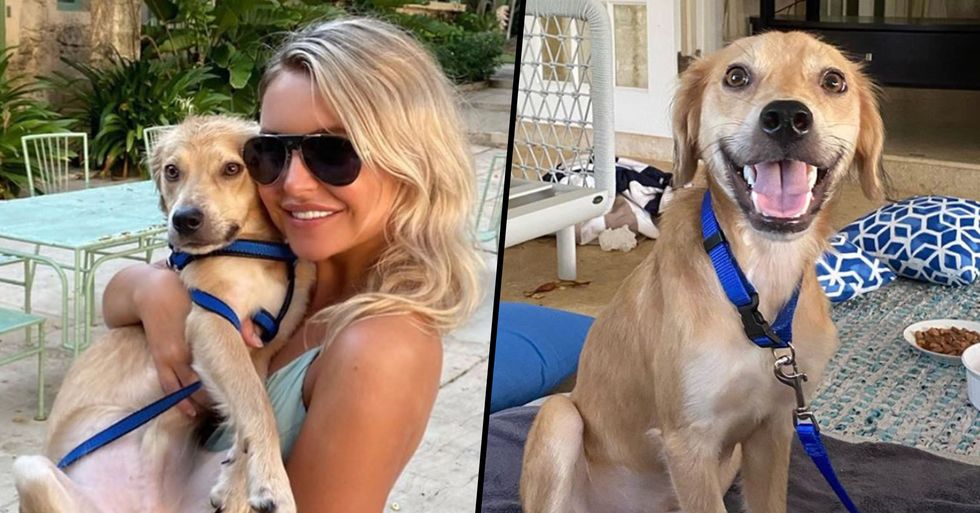 Couple Pay $4,500 to Bring Stay Dog Home After Finding Him in Barbados

All stray dogs need is a second chance and a loving home, and 2 brits have spent thousands to bring their rescue pup home from abroad, only to find out something tragic...

This is exactly what 2 brits did when they found a dog in pretty bad shape while on holiday...

But what they discovered later on, left them in tears.

Georgia Harding and her boyfriend Sam Blackburn found the poor pup looking as though he was "just skin and bone".

They said the dog, which they named Simba, was just days away from death.

The couple fell in love with him straight away...

And decided then and there they would bring him back home with them.

“We were driving and took a wrong turn and found Simba slumped on the side of the road. He was just skin and bone."

“He was terrified but didn’t even have the energy to run away. We took him to the vet who said he was being eaten alive by ticks and wouldn’t last 48 hours, but we saved him."

"Every day his confidence grew, his health improved and we could see he was in with a fighting chance."

The couple actually found 2 dogs on holiday, and easily managed to find a home for the other dog in Barbados...

Due to his condition, nobody wanted to take him in.

Georgia said: “I was distraught and couldn’t leave him."

“We got him chipped, treated and managed to get it sorted so that he could come home with us."

Simba finally got welcomed into his new home last week after being in isolation for twenty-one days.

However, after vets checked over him in the UK, they found that Simba also had a broken paw.

The additional surgery is going to cost them over ten thousand dollars...

So the couple has set up a GoFundMe to help with the costs.

Georgia said: “He is desperate to play and jumping around on it, so we’re in the process of getting it sorted. “We need to get a second opinion because the vets said surgery could fix his leg but it would cost a lot of money. “We’re up the wall because it has cost so much money to even get him home."

She added: “He is absolutely gorgeous. He is home safe and sounds and settling in very well, he just is dead loving and wants love."

“We only have one shot of getting it right with his leg though and we would be gutted if we didn’t try hard enough." To donate to Simba's vet costs, visit GoFundMe here.