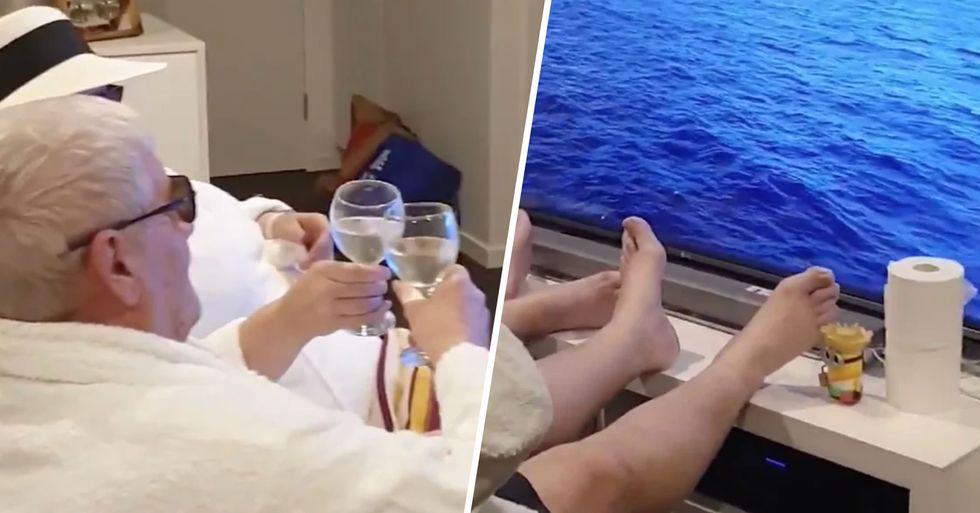 As the world continues to become victim to the deadly coronavirus, world leaders have urged people to take extra precautions in order to prevent further spreading of the disease.

Now that flights have been canceled and vacations are looking like an unlikely, we're having a difficult time to come to terms with the dreadful news. One couple has decided that they were going to enjoy their pre-planned vacation without actually leaving their home.

Keep scrolling to see the full video behind their home-made "vacation."

Close to 200,000 people all over the world have now been infected with the virus...

187,404, to be precise. And, devastatingly, a staggering 7,478 more have been reported to have died from the illness.

Since the first COVID-19 patient in Washington, there have been 4,774 more confirmed cases across the country and ninety-three deaths. We've been warned to self-isolate if there's even a chance that you may have contracted the virus.

The Australian government has outlined some guidelines for people that have been traveling and have returned home. They have been told to isolate themselves, regardless of if they have symptoms or not.

However, some people haven't managed to leave the country.

Dave and Norma, an Aussie couple who planned to spend their 53rd wedding anniversary on a lovely cruise have had to put their plans on hold since the pandemic.

But that wasn't going to keep them from celebrating such a momentous occasion.

They decided if they couldn't go on their vacation, they would bring it home. That's right, they were going on that cruise regardless.

Their daughter, Jane, posted the video of the outcome to her TikTok.

And I have to say, her parents managed to make the best out of an unfortunate situation. The wine. The TV beach. The bathrobes were a good touch too.

This is what their daughter had to say...

As per LADbible, she described the situation: "We had an idea that if we put a video up of water on their TV and they dress as though they would on their cruise they might not feel so disappointed as they were really looking forward to going to celebrate their 53rd wedding anniversary."

"Needless to say, we all had a chuckle over making the quick video."

Have a look for yourselves. During this difficult time, it's important to stay safe and avoid spreading. Keep scrolling to find out what's happened to the entertainment industry...