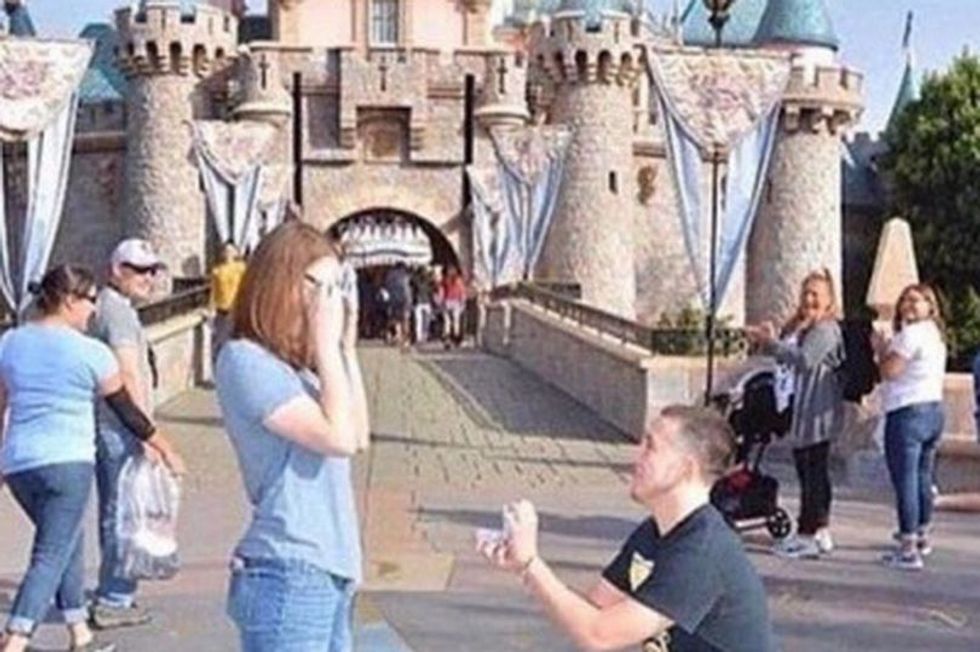 A couple has been ruthlessly ridiculed online after their Disneyland proposal was spectacularly gatecrashed by another man proposing to his girlfriend in the same manner...

They don't call Disneyland the most magical place on earth for nothing, do they?

In recent years, the popular theme parks have seen an influx of loved-up couples choosing to pop the question in front of the iconic Disney castle, and it isn't difficult to see why.

The castles are truly spectacular...

And they have gradually become Disney's most recognizable trademark.

But, thanks to the overwhelming popularity...

Engagements there have become somewhat predictable and unoriginal, with thousands of couples now celebrating their engagements at the exact same spot.

And sometimes, couples pop the question at the exact same time.

A photo has been circulating the internet today that shows 2 men simultaneously proposing to their girlfriends outside of Disneyland's castle, and they have been ruthlessly ridiculed as a result.

Now, the Disneyland mania started back in 1955.

Nearly half of the United States' citizens gathered around their black-and-white television sets on July 17th as California's Disneyland was finally unveiled to the public.

The theme park was an instant success...

And, fast forward over sixty years, the park and all the other Disney locations remain as popular as ever today.

Visiting Disneyland remains on the bucket lists of millions...

With the attractions, the rides, and the sheer magic of the place, it really isn't difficult to see why Disneyland remains as one of the most sought after places on Earth.

So, of course, it is the dream of many people to get engaged there.

Surely, there's no proposal more magical than one directly in front of the iconic Disneyland castle?

Well, sadly, this method of proposing has become somewhat tarnished.

Admittedly, it's still a magical experience but the once "original" Disney proposal has become a little "unoriginal" over the years.

Since the park opened its doors, so many couples have opted for this proposal method...

Making the whole sentiment behind the idea seem a little less magical.

Admittedly, couples usually have the whole spotlight on them...

As it is quite unusual for more than one couple to pop the question at the same time... Disney can only handle so many proposals at once, right?

Well, one couple has recently gone viral for their unlucky timing regarding their Disney proposal.

A photo of the couple's special moment was posted into the Facebook group, That's It I'm Proposal Shaming, where thousands of social media users slammed and ridiculed the pair as "cheesy" and "unoriginal."

At a first glance, it seemed like any other Disney proposal.

The boyfriend was down on one knee in front of the castle, while his girlfriend stood motionless, her hands covering her face out of shock. Yeah, you know the drill.

However, in the background of the shot...

You could see another boyfriend down on one knee as he also popped the question to his excited girlfriend.

Yep, another couple were sealing their engagement at the exact same moment.

Anyway, the photo was posted onto the merciless Facebook group...

And the users went to town with roasting the unsuspecting couples.

These people didn't hold back.

One person wrote: "When you get the prime spot so the guy at the back has to propose by a bench." Another said: "If someone else is proposing in the same area as you at the exact same time as you, that's your clue that your idea is completely unoriginal."

Evidently, they couldn't see the funny side of the photobomb.

Someone else commented: "If you're gonna get engaged at Disney at least pick somewhere not so common lol." A fourth person replied: "So cheesy and cliché." "Why not wait an hour and come back or do it the next day. I don't get it," added a different user.

However, many people jumped to the couples' defense.

What do you think? Is it really as bad as the Facebook group has made it out to be? Or should we simply mind our own business?