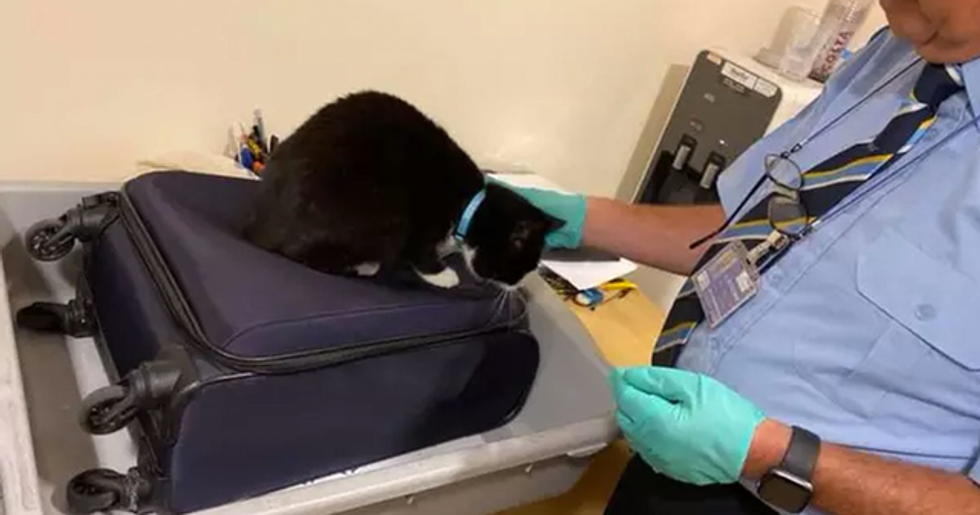 There are several things that you just know you can't take through airport security - Certain liquids, sharp objects, aerosols... Oh, and live animals.

As much as most of us would love to bring our pets on vacation, the whole process of taking an animal abroad is an extremely long one, so most of us opt to just leaving our furry friends at home.

Some pets have other ideas, however.

One couple from the U.K. were in for a nasty shock when a piece of their hand luggage got seized at the security... Because their pet cat had secretly crawled in without them realizing. Luckily, the cat was spotted before the couple boarded their flight, but it made for a lot of explaining to do.

Keep scrolling for the full story, and to find out just how such a mistake can even happen...

Navigating through airport security can be a stressful experience.

You don't say?! The rush to catch your flight on time combined with the pressure of having your belongings searched for weapons can create a bit of a tense atmosphere, to say the least.

So, in order to make the experience as smooth as possible...

These restrictions can include a variety of things...

From certain foods to suspicious items of clothing, there are many things that can slow down the check-in process.

And your pet cat is definitely one of them.

If you ever want to throw a spanner into the works of airport security, a surprise cat hidden in someone's luggage will certainly do the trick.

And this is exactly what happened to one unsuspecting couple this week...

Their journey to the airport was uneventful, and they checked in for their flights smoothly... Things were going well.

Until they got to security.

Okay, this is admittedly the worst part of anyone's vacation experience.

The couple gave over their hand luggage to be searched...

But one of their suitcases was taken to a side after the electronic scanner gave warning signals about something mysterious inside.

And the mystery discovery?

A rather confused domestic house cat.

And one of them had somehow managed to sneak into the suitcase without neither Nick or Voirrey noticing.

How on earth do you zip up a suitcase without noticing the living, breathing cat sat inside of it?!

Well, this couple certainly had no idea what their mischevious pet had done.

And only realized once they had been ushered into an interrogation room and quizzed upon their furry addition... Or Candy, as the Coole's know her best.

The Coole's were met with a hilarious sight...

Upon entering the interrogation room, they immediately saw Candy sat rather sheepishly on top of their suitcase. "Airport security were all very puzzled and repeatedly asked if the bag was ours after it had been through the scanner," Nick told the Manchester Evening News.

The bag was indeed theirs...

And so was the cat.

They had no idea Candy had squeezed her way in...

"Our hand luggage didn’t have much in so we could bring shopping home," Nick said. "But Candy, our cat, found a way in and off to the airport we all went."

Though this wasn't out of character for the mischevious kitty...

As Nick has admitted that Candy is always looking for bags, boxes and tight spaces to hide in.

Luckily, they didn't get into too much trouble over the incident...

And the couple noted that the staff at the Isle of Man airport were "awesome" and laughed with them once they realized it was an honest mistake.

The couple made their flight! With the help of the airports staff, Candy was picked up by friends so that Nick and Voirrey could still catch their flight to New York in time.

Candy and her antics quickly went viral, with over 5,000 people commenting and reacting to Nick's post.

Moral of the story? Don't leave your suitcase unattended when you have cats. Ever. They will make sure your vacation is ruined somehow...