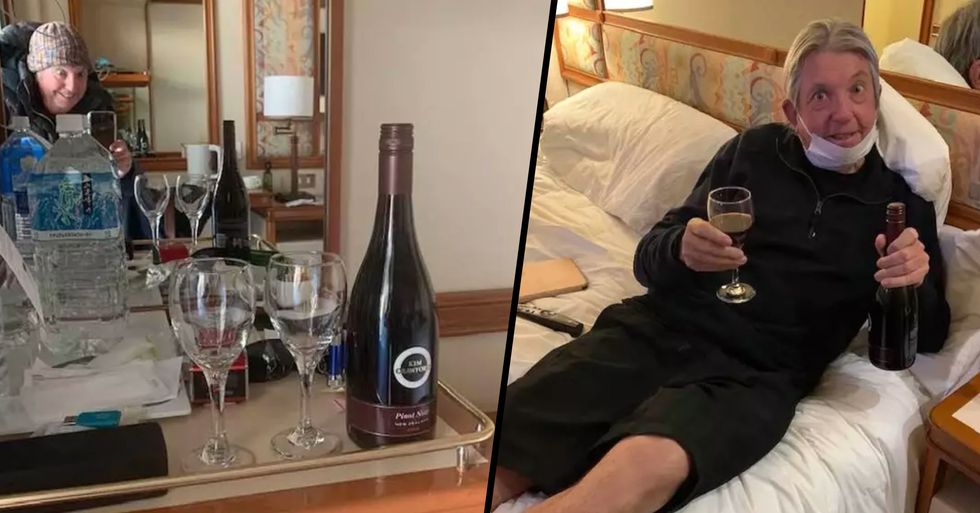 Amongst the global panic, people have been trying to figure out exactly where the virus has come from and how to treat it effectively. And one thing at the heart of this outbreak is the Diamond Princess Cruise Ship - now dubbed the "coronavirus ship."

Those trapped in the quarantined ship have been taking to social media to show what it's really like onboard and it seems one couple managed to get wine delivered to their room. Keep scrolling to take a look...

But there's one thing at the heart of the medical crisis...

The Diamond Princess Cruise ship which currently holds 2,500 quarantined passengers off the coast of Yokohoma, Japan.

The passengers have been held there for over a week now.

And there have been 169 cases of coronavirus on the ship so far, at the time of writing. Although it's not easy to determine the exact number as officials don't have the resources to test everyone on board.

Twenty Americans are among those infected.

And while the ship may be in quarantine, this virus could spread at an immensely fast rate given the fact that so many people are in the same space.

And at least 10 crew members have been infected.

According to The New York Times: "the infected crew members identified on Sunday had been eating in the mess hall alongside their co-workers."

In fact, the ship has the most cases of the deadly virus outside of mainland China.

And people have been taking to Twitter to reveal what it's really like onboard. Keep scrolling to take a look at a collection of tweets showing the terrifying reality.

25. For the first few days of quarantine, passengers were unable to leave their rooms.

Although they seemed to have been kept as comfortable as they could be, given the circumstances.

24. On the second day of quarantine, passengers were given thermometers.

Distributed aboard #DiamondPrincess with instructions to take out own temperatures several times a day and report i… https://t.co/MvzNt7zChZ
— Matthew Smith (@Matthew Smith)1581045274.0

They had to monitor and report their temperatures for observation.

23. Many people haven't seen another soul for days.

This is my cabin door on the #DiamondPrincess . No one has crossed the threshold, either way, since Sunday evenin… https://t.co/ekX9l18kVi
— Matthew Smith (@Matthew Smith)1581131178.0

And are desperate to get out of the same 4 walls.

22. Although some people have found ways around life trapped in their rooms...

This is the only plea for help I have onboard #DiamondPrincess Sorry/Not sorry https://t.co/FTy6lmIEZH
— Matthew Smith (@Matthew Smith)1581116363.0

21. Staff are trying their best.

And have even made care packages for the kids on board.

20. Food is being delivered to the rooms.

And apparently, it's still delicious.

18. Passengers have recently been allowed a short amount of time outside.

Although it's not much, many were grateful for some fresh air.

17. Although several families are still cooped up in their rooms.

It was a must-watch, after all

15. That wasn't the only Oscar-related offering.

Congratulations to Brad Pitt. We actually have #Oscars2020 live on the #diamondprincesscruise. Here are my pics! https://t.co/wzBZLgoDH3
— Kent Frasure (@Kent Frasure)1581297700.0

They even gave out ballots!

14. Passengers have been exercising in their rooms.

Given the fact that most of their day is spent in their tiny rooms, this is about as good as it gets.

13. Japanese media can be seen around the ship.

Staff have had to ramp things up a notch when it comes to sanitation. This breakfast came with a side of wet wipes.

11. Masks have been handed out.

Things have taken a much more serious turn in recent days and given the fact that a ship is such a contained space, the virus will spread like wildfire.

10. People have been trying to stay hydrated.

Water supply is a high priority.

9. For many, waiting around is painful.

#day7 #coronavirus #CoronavirusOutbreak #quarantined on #diamondprincess worry about mom. She is not doing good. He… https://t.co/yxnHORqDDO
— Yardley W (@Yardley W)1581385126.0

Don't worry, the company made sure she was okay!

8. More and more infections are being reported on board...

The true severity of this is starting to hit people hard.

7. Thankfully, there are several medical professionals on board to help.

Offering hope to so many.

6. Ambulances are stationed port side.

For many, this was their first look at the port since quarantine began.

5. Amazon Japan have even offered their services.

They've been delivering packages to the rooms.

4. The Diamond Princess staff are working hard to keep everyone comfortable.

They are truly going above and beyond despite likely being terrified they'll catch the illness.

3. Many people are putting on a brave face.

And patiently waiting for quarantine to come to an end.

2. The alcohol supply is running low...

And many are savoring what may be their last drink for some time.

1. Alcohol seems to be the one silver lining.

We can't blame them.

But one couple have gone to even greater lengths to ensure they have a supply of alcohol.

Jan and Dave Binskin from Queensland, Australia, are determined to not let coronavirus ruin their vacation.

The couple has been sharing regular updates from the ship online...

And their latest snaps prove they are making the best out a bad situation... by ordering wine to be delivered to their room.

They seemed very pleased with themselves...

"Naked Wine Club you're incredible just got the first drop. Thank god for drones, the Japanese Coast Guard did not know what the f*** was going on," they wrote.

They also shared this snap:

As of right now, quarantine is supposed to come to an end on Feb 19th.

Let's hope that they can find a way to better treat and contain this illness. Want to know more about the coronavirus epidemic? Keep scrolling to see the shocking effects that treating coronavirus has had on medics' faces.