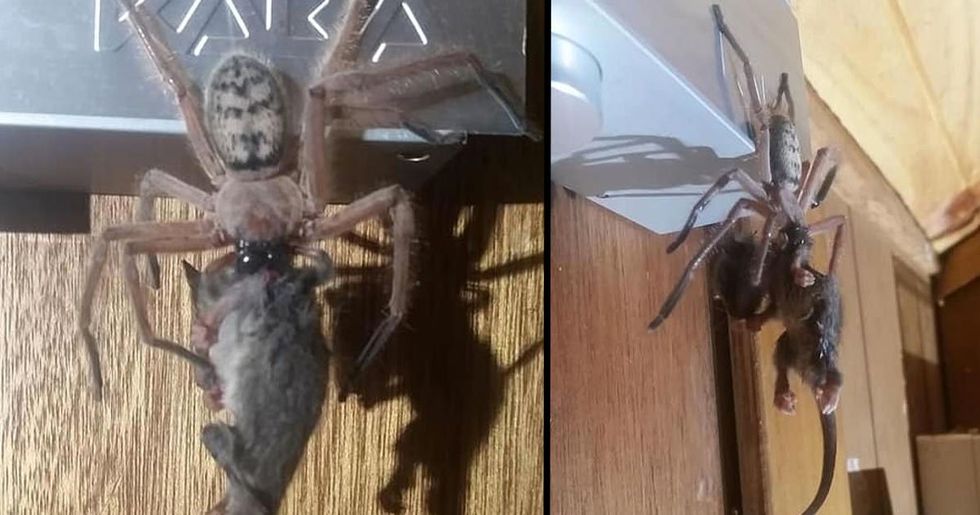 As brutal as human behavior can sometimes be, it's honestly nothing compared to what goes on in the animal kingdom. Any weird or horrific creature that you can think of, it probably exists out there somewhere and you can bet that it's worse than you think it is. But one image that has been shared online this week has really shocked the internet with its true visceral horror.

The image shows a spider chowing down on its lunch - but that lunch happens to be an entire enormous possum. Yes, it's as horrifying as it sounds - and the internet (obviously) can't get enough of it.

Of all our bizarre and irrational phobias, there's one that is probably the most common of all.

Arachnophobia (fear of spiders) is something that the vast majority of us will admit to having. Something about the sheer amount of legs (or the creepy way that they use them) gives many of us the heebie-jeebies.

Although, often, the fear is actually kind of rational.

There are certain species of spider that can pose a very real threat to human life - though it's likely that our fears are slightly exaggerated.

Because, sometimes, spiders are kind of cute.

Plus, think about it, if we lived in a world without spiders, the sheer amount of other, smaller insects that would be left to take over without a natural predator really doesn't bear thinking about.

Nonetheless, there is something undeniably creepy about spiders.

In spite of the fact that it's a pretty irrational fear, spiders just are a bit scary.

Whether you're fully phobic, or simply slightly creeped out, there are certain spider-related images out there that would pretty much universally terrify.

But there's one picture that may be the worst that we've ever seen.

The image has gone viral, and, to be honest, even as a non-arachnophobe, it's pretty hard to look at. You have been warned.

The image was shared in a certain Facebook group.

Tasmanian Insects & Spiders is a treasure trove of terrifying images. It's not restricted only to spiders, but they pretty much dominate the page.

Although not every image is scary.

Some of the pictures from the group are actually rather beautiful and show the stunning natural biodiversity of Tasmania through its extensive insect population.

Nonetheless, some are pretty scary.

This image of a spider photographed in south of Seattle, Washington, is surprisingly majestic - once you get past the initial shudders.

The page is also a valuable source of information.

Some members use the group to share images of spiders that they aren't sure about, asking for experts to help to identify the mystery species.

Some of the spiders are weirdly cute.

This image of an opisthoncus jumping spider weirdly made us want to say "aww."

Although there are some that prompt a different reaction.

This image is more of a conventional spider share - one that seems primarily designed to induce a certain level of pure, unadulterated fear.

But there's one spider that strikes fear into the heart even of arachnophiles.

The huntsman spider is well known for being a pretty terrifying piece of work, likely because of its enormous size.

But the latest image shared of the huntsman spider is pretty shocking.

In the picture, the spider is eating another creature - and a pretty big one at that. The victim/lunch in question? A pygmy possum.

Ok, it is a pretty small creature.

A full-sized pygmy possum tends to grow to around three inches long, and they only weigh around 0.2 ounces.

Spiders have been seen eating some pretty hefty prey.

It's clear that spiders are pretty happy to munch on anything that they fancy - regardless as to whether it's smaller than them or not.

Here are the pictures that have got the whole internet talking.

Justine Latton was vacationing with her husband in Tasmania's Mount Field National Park when they stumbled upon the shocking scene.

She gave the images a surprisingly upbeat caption.

"Possum-eating spider! Taken by my husband at a Mt Field lodge," is what Latton went for - complete with a little smiley face.

As you can probably expect, much of the internet was pretty horrified.

Comments ranged from terrified to impressed. "Holy sh*t. Nope," and "Omg... I can't even... I wanna scream" were two typical reactions. Another commenter wrote, "Even though it's just a pygmy possum it's still impressive the huntsman got him," while another agreed, saying, "Justine this is so interesting. Nature never ceases to amaze me."

Although not everyone was convinced.

One skeptical commenter wrote, "This looks set up. Both of them are dead, right? Are huntsmen even capable of biting through that? Les alone the spider web coming out of it's back?" We'll let you be the judge!