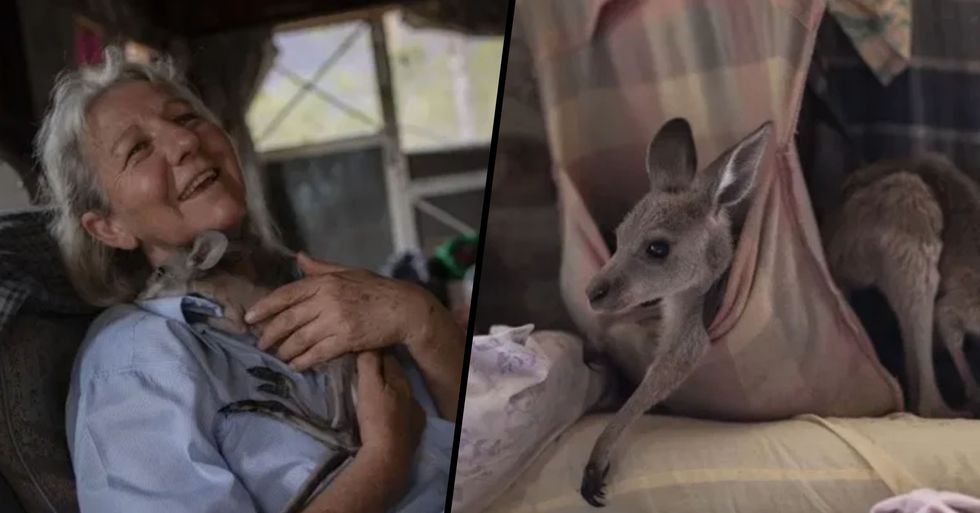 But since it started raining earlier this week, things seem to be looking up for the desperate country and people are coming together to help more than ever before.

One couple in New South Wales has found kindness in their hearts to take in 60 young kangaroos.

But something miraculous happened yesterday...

It started raining! According to Daily Mail, downpours have already helped to extinguish thirty-two bushfires in New South Wales "as the number of blazes fell from 120 to 88 on Thursday morning."

This rain is a true blessing to the country...

Eastern Australia has even been hit by storms...

The weather is about to make a drastic change...

"We could see widespread severe weather with damaging wind gusts, further flash flooding and we could even see supercell storms," he said, "So there's going to be some big rain."

Conditions are set to get heavier...

"Showers and storms will start to increase over Queensland, New South Wales and Victoria from Wednesday and continue to affect parts of eastern Australia each day, until at least early each next week," he went on to explain.

Yet despite the happy news...

Millions of animals have still been left homeless and without food or water.

Hundreds of people have been volunteering tirelessly...

And despite the heartbreaking statistics, a lot of wildlife have been rescued and they are currently being cared for by kind volunteers.

Some people have even been inviting desperate creatures into their homes...

And Julie Willis and Gary Wilson have sheltered a lot of guests recently.

And after the fires ripped through the small communities of Wytaliba and Torrington, they decided to turn their home into a wildlife sanctuary.

They already run a kangaroo sanctuary...

And after decades of experience with the animals, they decided to take in sixty new additions.

They are now overwhelmed with kangaroos, wallabies, and possums.

The couple has estimated that around eighty-percent of wildlife have been killed in the fires, and Gary said to Metro, "A once prolific wildlife collection is virtually nil."

Many of the animals that have been taken in are orphans...

One baby wallaby’s mother had to be euthanized after the fire in Wytaliba while one of their young kangaroos lost his mum after she was hit by a car trying to find food in the ravaged land.

The pair have been creative enough to make pouches out of sheets for the little ones...

The pouches will replicate the pouch of a mother so the orphans won't feel neglected or lonely.

But despite the care...

Julie told her local newspaper that most of the whiptail wallabies had been lost and not many possums survived.

It is truly traumatizing to see how many animals have suffered...

She said, "The amount of dead and blackened kangaroos and possums by the side of the road after the fire was horrific... Farmers, too, lost horses, pigs, alpacas, and goats."

The couple's selflessness and kindness is truly heartwarming...

And it is because of people like Julie and Gary that more and more beautiful animals are being rescued. Keep scrolling to see some incredible acts of kindness being shown towards Australia's wildlife...