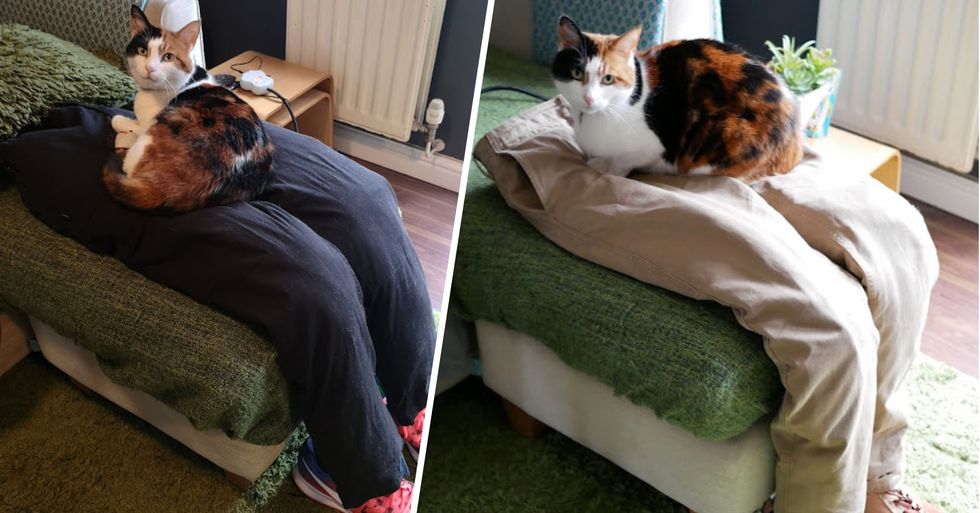 One cat has taken the spotlight this week - but not for what you'd expect. Her owners had to think fast for a solution...

As one feline has proven this week.

This lovable feline was adopted by Rebecca May and her husband, Alex, in London, U.K.

Ziggy was very shy at first...

But it didn't take long for her to come out of her shell.

Quickly she began sprawling out on her owner's lap.

But this started to become something of an issue for Rebecca and Alex.

After the couple started working from home...

Ziggy began climbing onto Rebbeca's laptop and desk to try and get her attention.

Preventing her from being able to get any work done.

The couple had to think fast.

And it didn't take long for them to come up with a nifty solution for Ziggy.

Alex came up with the genius idea to create a "fake lap" for Ziggy to sit on when she can't settle on her owners.

Alex took a pair of trousers and stuffed them so they looked like human legs, and then added shoes and a pillow to create a stomach.

But the real magic touch is down to a heating pad, which he placed in the lap of the trousers.

"[Alex] thought that creating a decoy would be funny, but I don’t think he expected it to actually work. Harley [Ziggy’s sister] was totally uninterested, but Ziggy loved it," Rebbeca explained. "She needs warmth and to feel protected, we think." What an adorable kitty! Want more heartwarming animal content? Keep scrolling to check out a list of the most unusual animal friendships. Just wait until you see the dog and the chicken...