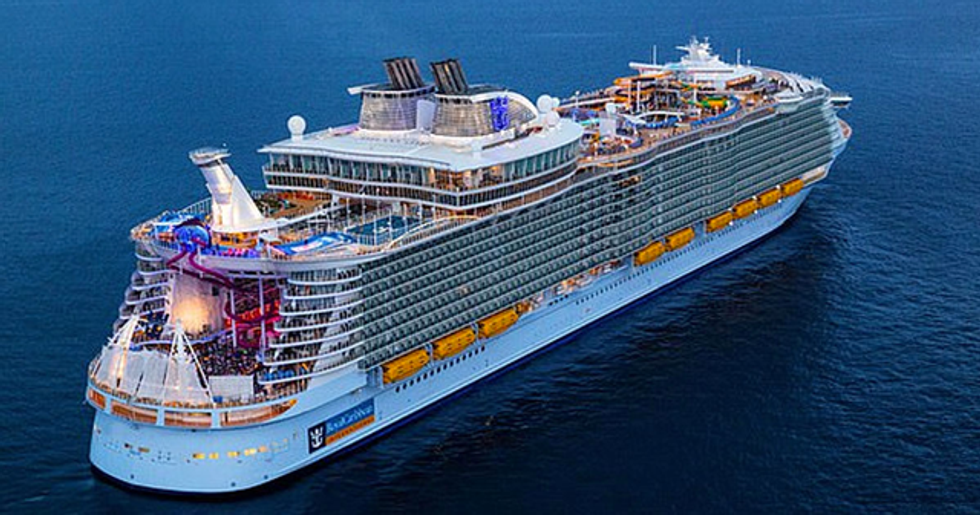 Couple Watch on as Cruise Ship Leaves Port Without Them

Many of us dream of one day going on a luxury cruise. With unlimited snacks, fun activities and maximum potential for relaxation, they're the dream holiday for those who just want to unwind and pamper themselves. But just because you book a ticket doesn't necessarily mean you'll get to enjoy all the treats on boards, as one couple learned to their detriment earlier this month.

After arriving forty-five minutes late for their Royal Caribbean cruise ship, the captain clearly decided that enough was enough. The boat pulled away from the port in Nassau, Bahamas - leaving the couple stood helplessly on the dock. They waved the try to get the boat to reconsider, but it's clear their attempts were in vain.

It's unknown what happened to the disorganized pair after they were left stranded. What is clear, though, is that the internet has no sympathy for these ill-fated passengers.

For many, a cruise is the ultimate luxury.

In terms of a relaxing holiday, they can be pretty hard to beat. And who couldn't use a holiday at this time of year?

A cruise ship is nothing like a regular boat.

In fact, once aboard, you can almost forget you're at sea at all. They're not just bed and board, but a hive of fun activities.

Many boast features including swimming pools, surfing simulators, bars, nightclubs, saunas, restaurants and even more. Check out the water slides on this ship!

For many, a cruise is the ultimate escape.

You can feel truly free and relaxed once out at sea, and away from the pressures of your daily life both geographically and mentally.

Many tend to happen around tropical destinations, allowing you to get a taste of the blue skies, clear waters and white sandy beaches that seem like a real-life paradise.

In fact, we're getting tempted to book one right now.

The combination of being totally taken care of, the feeling of exploration and freedom that comes with the open sea, plus the opportunity to see some of the most beautiful places on earth sounds hard to beat.

These Carribean island are known for being visually breathtaking, plus having some of the most consistently fabulous weather for holidaying.

On popular destination in the Bahamas in Nassau.

Nassau is the capital city of the Bahamas, and is located on the island of New Providence. Just a short boat trip away is the legendary Paradise Island, famous for its beautiful beaches.

Many cruises around the Bahamas make stops at these locations.

It's a popular destination for cruise ship travelers, thanks to both its relaxing seasides and excellent natural reefs offshore, which makes for fabulous snorkelling opportunities.

There's just one thing to remember about cruises.

You're a part of a wider community while you're on a cruise. You have to stick with the crowd, and respect your (many) neighbours.

One important aspect of this?

Keeping on time. There's nothing more annoying than having to wait for latecomers - and when you're in a travel group as large as a cruise ship, timekeeping becomes all the more essential.

But one couple learned this to their detriment.

Instead of heeding warning from the cruise ship, and sticking with the rest of the passengers, they decided they didn't need to follow the rules.

But the cruise ship had other ideas.

Instead of patiently waiting for its two disorganised passengers, the boat decided enough was enough. It made the decision to pull away from the port.

The two passengers were left stranded on the dock.

Even more painfully, they could actually see their boat not far from the water's edge. But it was too far for them to reach.

The couple had, quite literally, missed the boat.

Although, given that they were reportedly around forty-five minutes late for the scheduled time of departure, we can't say we feel too bad for them.

The doors were closed, and the ship pulled away.

The passengers were left feeling a little bit silly for playing so fast and loose with the schedule. Organization is key, people!

You see the shots filmed from the deck of another nearby cruise ship. According to the camera man, the all-aboard signal occurred at around half past three.

Around forty five minutes after the call, the boat began to make moves.

Five minutes after the doors closed, the passengers finally show up. It's clear they had a great time on the island, as they're carrying plenty of shopping.

At first, the couple panic, shouting and waving the boat down.

However, the boat keeps moving further and further away. It becomes abundantly clear, even to the couple, that there's no way they're getting on board.

One of our first concerns?

Will the pair be refunded their (undoubtedly hefty) ticket price? Well, if the lateness was the fault of a genuine emergency, it's likely they could appeal to Royal Caribbean. But, as it appears to be just some lousy timekeeping, it's likely the couple are out of luck.

And let's just say... the internet wasn't too sympathetic.

In fact, most of the online responses have been vehemently agreeing with the decision by the cruise ship to leave the ungrateful pair on the shore!

Most thought the fact the ship had waited at all was pretty good of them.

As one YouTube commenter put it, "That boat hold 5,518 passengers. 5,516 of them were appropriately able to follow directions. If I were the captain, i would have tried to splash water in their face on the way out, just for being douche bags."

Some found the misfortune a little bit funny.

It was a perfect example of someone getting exactly what they deserve. They didn't care about the other passengers' holidays - and now their holiday is over!

People drew attention to the ample time the pair had been given.

Another YouTube comment stated, "I just came off a cruise a few days ago. Daily I saw people come back after the “cut off" time of 430pm. I saw people coming in between 445pm-5pm. If you can’t respect the rules you deserve to get left."

Some even said they were glad the pair had been caught in the act.

"Every time when we go on a cruise I always make sure I come back super early my wife and I because I don't want to end up on YouTube looking like these two like a damn fool," laughed another commenter.

There was an overall lack of sympathy.

As one comment eloquently put it, "Not that I'm rejoicing in their misfortune, but cruises are very scheduled. You have so many hours at port, for meals and for entertainment. If ships had a reputation for waiting for every person who was late, they would never leave port. Punctuality is the ultimate respect for someone else's time."

It's highly unlikely the couple were not given multiple warnings about what happens if you're late. It's just that they chose not to take them seriously, or to ignore them entirely.

One pointed out this fact.

The cruise ship staff aren't your pals at home who don't mind when you show up an hour late. https://t.co/CUaTJSSnPn via @MailOnline
— Juliet Huddy (@Juliet Huddy)1551275441.0

Being "always late" may be just about acceptable when it's just friends you're letting down. But a boat filled with thousands of strangers? They're likely to be less forgiving.

Although we have to say, being stuck in the Bahamas isn't too much of a punishment.

Could be worse they could be stranded in Southampton
— Stewart Whittingham (@StewartWhittin3) February 27, 2019

There are plenty of worse places to be left behind, as one Twitter user joked.

Even so, we can't imagine the fallout from missing your cruise ship is much fun to deal with.

We hope the couple have learned a valuable lesson.

And we certainly have! The very next time we're on a luxurious cruise in the Bahamas, you get bet we'll get back to the boat with time to spare.