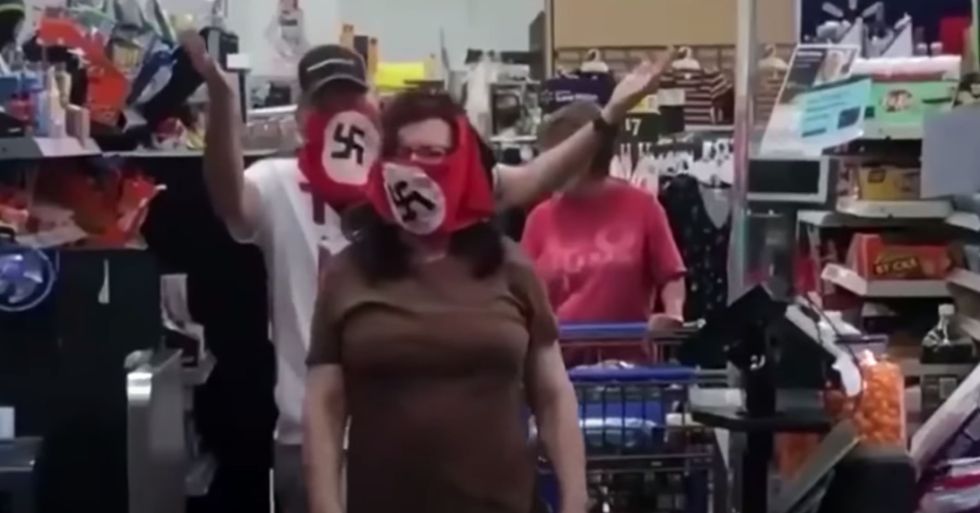 During the current pandemic, the use of face masks has long been a debate. Even though a lot of people have finally accepted it, others have decided to try and make a political statement with their face masks.

This video might be the most disturbing footage yet...

The pandemic has taken over.

But that doesn't mean they haven't been total a**holes about it.

One couple decided to custom design their own and the results were absolutely appalling.

While shopping in Minnesota, they decided to put on their swastika masks, alerting their fellow shoppers to their racist tendencies. However, they claimed that they were not Nazis in any way, shape or form.

And thankfully, they did not get away with it.

People immediately called them out, calling them "un-American" and then even resorting to calling the police on them. They turned up and decided to hit them with a Walmart ban, which prevented them from shopping in the store.

But they didn't seem to bothered by it...

Instead, they decided to tell us all how America is looking in the future if Joe Biden wins. What a weird way to make a political statement?

And Walmart released a statement about the entire fiasco too... Of course, they did.

If there's one thing they love, it's a bunch of statements and no real policies.

“What happened today at our store in Marshall, MN is unacceptable. We strive to provide a safe and comfortable shopping environment for all our customers and will not tolerate any form of discrimination or harassment in any aspect of our business."

And people's reactions were passionate, to say the least.

Why weren't they kicked out?

"We are asking everyone to wear face coverings when they enter our stores for their safety and the safety of others and it’s unfortunate that some individuals have taken this pandemic as an opportunity to create a distressing situation for customers and associates in our store."

Let's just hope people stop being a**holes. Keep scrolling to see what Costco is doing about customers who refuse to adhere to rules...
20%