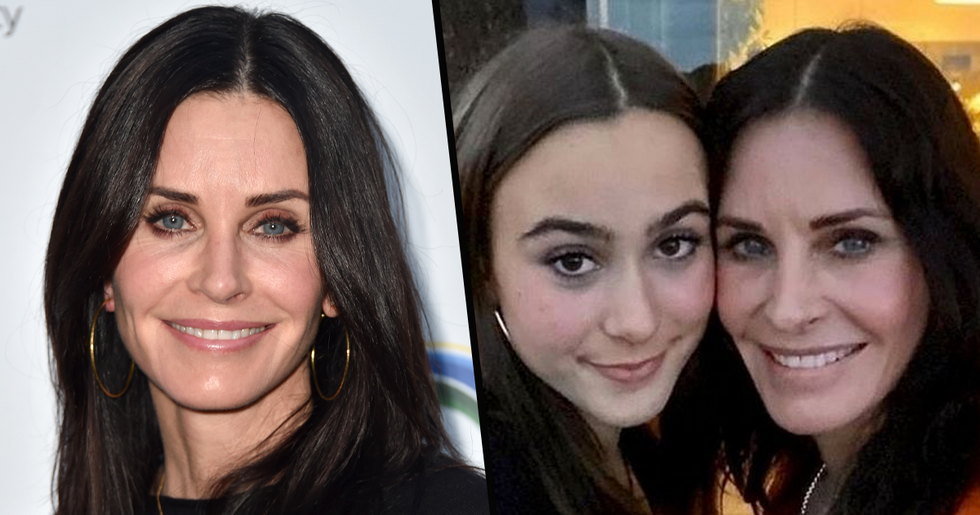 Courteney Cox has opened up about her "strange" Mother's Day gifts from her daughter Coco, and she wasn't impressed...

Courteney Cox has spoken out about her disappointment over her strange Mother's Day gift this year...

And she didn't hold back.

Courteney was born in 1964 in Birmingham, Alabama.

The youngest of 4 children, Courteney lived with her mother and step-father after her parents split in 1974.

But acting wasn't always on the cards...

In school, Courteney was an avid tennis player and swimmer.

But, after a year she dropped out to pursue a modeling career in New York City.

Her modeling pursuit eventually led to a career on-screen.

The star started out bagging small roles on both film and television.

But her big break came from an unlikely place.

You probably thought her big break came from Friends, but it actually came when she was cast by Brian De Palma in the Bruce Springsteen video "Dancing in the Dark."

And moving on to what Courteney is best known for...

Her role as Monica Geller in the incredibly famous sitcom, Friends, which first hit screens in 1994.

The entire world fell in love with neat-freak Monica...

And this very quickly became the thing that Courteney was mostly recognized for.

Monica and Chandler were starting a family, Phoebe was newly married, Rachel had a new job in Paris… As with a lot of friendships, the gang had grown apart and were embarking upon their separate journeys.

Her role in Friends plunged her into the Hollywood spotlight...

And while the fifty-five-year-old actress has gone on to star in many other roles after her ten-year stint as Monica.

Courteney will always be known as the obsessive, Monica Geller.

Courteney continued her acting career after her Friends came to an end.

Most notably starring in the 2009 series Cougar Town - a performance which earnt her a Golden Globe nomination a year later.

But fans began to notice something about the star...

In similarity to many celebs, Courteney has undergone many cosmetic procedures.

It all began with the odd tweak here and there...

But Courteney soon became very invested in enhancing her looks, and she soon became almost unrecognizable.

Courteney opened up about her regrets with surgery...

Back in 2017, she told New Beauty magazine that she regretted having had certain cosmetic procedures because they made her “look worse, not better." “You have no idea because it’s gradual, until you go, ‘Oh, s***. This doesn’t look right… And it’s worse in pictures than in real life," Courteney said about the fillers and injections that she got.

The actress ultimately made the decision to have her fillers dissolved.

“I’ve had all my fillers dissolved. I’m as natural as I can be. I feel better because I look like myself. I think that I now look more like the person that I was. I hope I do," she said.

Despite still looking a lot different to her younger self...

Court now looks a little bit more natural and she is aging wonderfully, we must say!

And a lot of these posts include fellow celeb pals, and often the former cast of Friends… which we absolutely live for, by the way.

Although this is quite a rare occurrence.

Courteney has always been fairly private about her family life...

And this includes Coco, who she shares with her ex-husband, David Arquette.

But Courteney recently opened up about her relationship with her daughter on a live chat with Jimmy Kimmel.

She shared a rare glimpse into her family life when she was discussing Mother's Day with Jimmy and what gifts she receives from Coco every year.

With the segment being filmed just before Mother's Day, Jimmy asked Courteney if Coco had anything planned.

"I'm just glad that Spencer's the store is not open because I seem to get a lot of stuff from Oz," the actress explained. "Last year Coco got me a book, I think The Sound of Farts. Like, I love farts, I do. I love a fart joke. But I don't want that."

Now that isn't exactly a Mother's Day gift now, is it!

Courteney went on to explain that she would much rather her daughter to express her feelings and show love in that manner rather than continuously purchasing joke presents.

"I want to have a nice handwritten letter, something talking about her feelings for me," she added.

Talk about dropping a hint!

And let's hope that Coco got it!

And make sure to keep scrolling to read about why Courteney doesn't remember filming Friends...