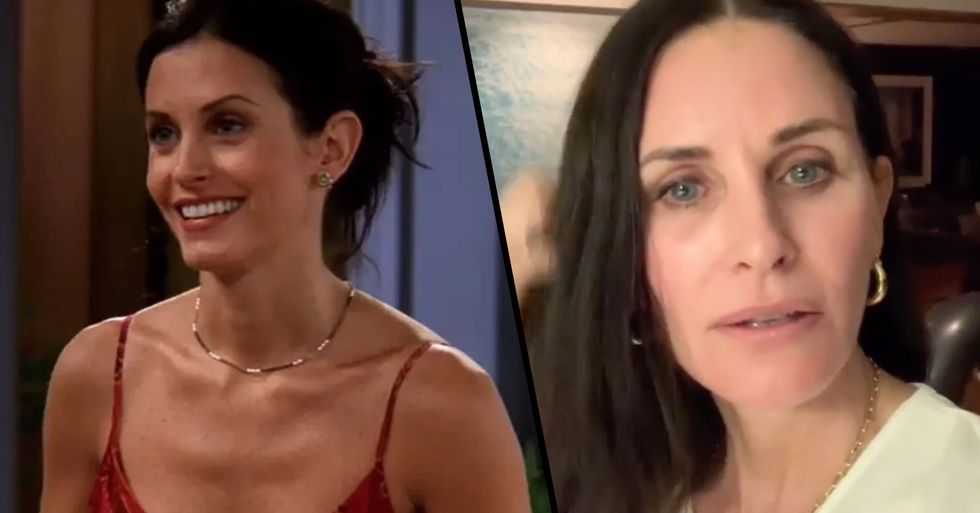 Courteney Cox Doesn't Remember Being on 'Friends', Says She Only Remembers 'Pain'

It's hard to find someone who hasn't watched the entire 10 seasons, but believe it or not, Monica herself is one of these people.

Courteney Cox is binge-watching Friends for the first time ever during isolation...because she has no memory of filming, and there's a heartbreaking reason why.

Cast members have teased this possibility over the years...

And finally, a cast and producer reunion was confirmed earlier this year, much to global delight.

She explained to Jimmy that she is self-isolating the right way...

And we should be doing the exact same thing!

Especially when so many fans around the world know the script to Friends by heart.

This spurred Courteney along to start from the beginning during her quarantine...

"I decided during this time - because people love the show so much - I decided to binge-watch Friends," she said.

Courteney has more recently appeared on the Ellen show to talk about her experience binge-watching the series...

And a heartbreaking reason has come to light, just why she can't remember anything from her years playing Monica Geller.

"I only remember pain, I think. So I started watching it, I've been binging it. It's really good, turns out."

We hope Courteney is enjoying the show as much as we do.

And we can't wait to see her and the other cast members at the reunion show, whenever it appears.

We've been blessed with even more Friends material to quench our quarantine boredom. Scroll on...