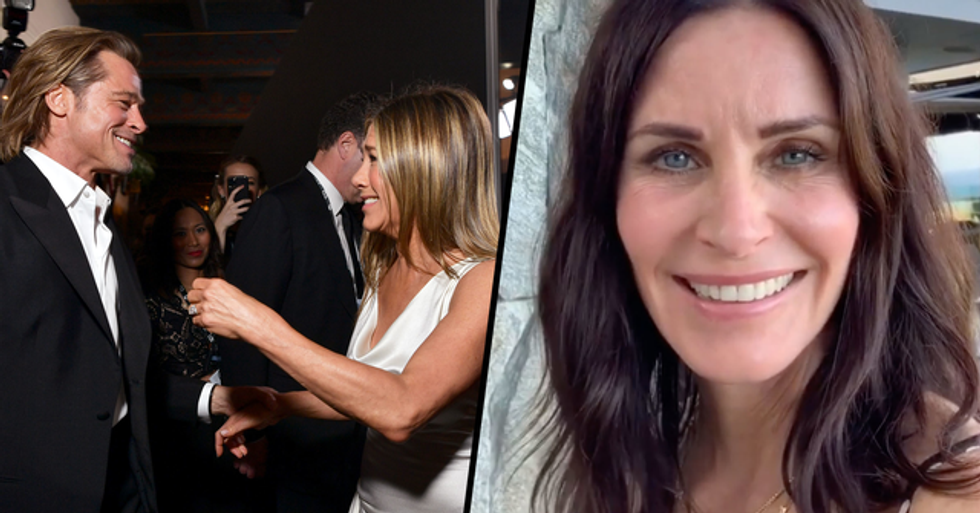 But now Brangelina are over, fans are convinced Jen and Brad are more than just good friends. And images from last night's SAG awards seem to confirm the theory. Twitter is loving the reunion - and so are many celebrities, including Friends co-star Courteney Cox.

Because last night at the SAG Awards...

And it seems mere mortals aren't the only ones affected by these pics.

Because celebrities have been spotted going equally as wild for the pics.

It seems the whole world can't cope with this Brad 'n' Jen reunion.

But one celeb in particular seemed into it.

Courteney Cox, who played the Monica to Jen's Rachel, was there for their whole relationship during the filming of Friends.

And it's clear she was a Brad 'n' Jen shipper.

Because Courteney was liking the pics.

And if one of Jen's close friends approves...

Could that be the proof we need for their potential future?

And even more suspicious?

One Twitter account wrote about the love still evident between Jen and Brad - and guess who "liked" it?

None other than Courteney Cox. This is soooo conspicuous!

Fancy more from Brad and Jen? We know you do. Keep scrolling for her adorable reaction to his Golden Globes win.