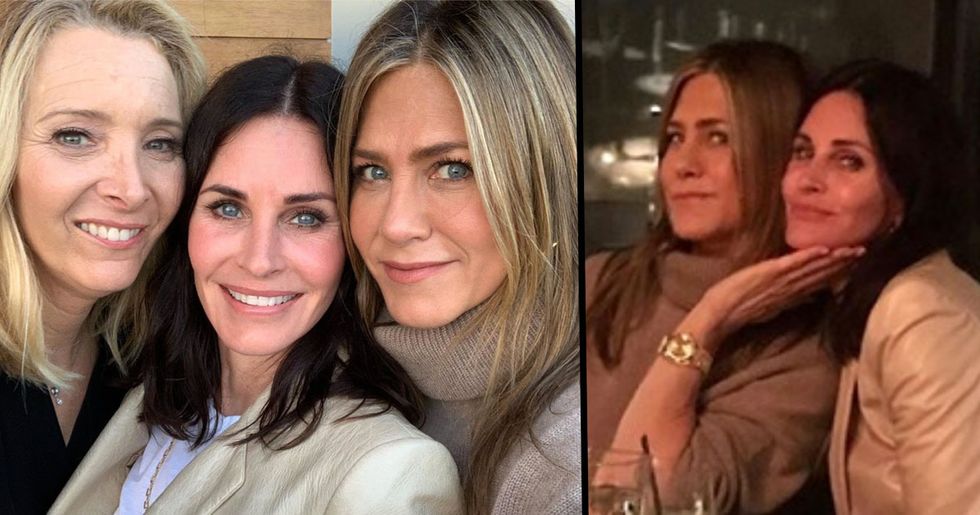 Our favorite sitcom, Friends, ended fifteen years ago and it's no secret that the cast has all remained, well, friends.

After being introduced to the guys in 1994, Joey (Matt LeBlanc), Chandler (Mathew Perry), Ross (David Schwimmer), Monica (Courteney Cox), Phoebe (Lisa Kudrow), and Rachel (Jennifer Aniston) have become nothing less than household names, which is why fans can't seem to get enough of seeing the gang together again.

In the years since the show ended its ten season run, for fans, it feels like its been an endless cycle of false hope and continuous refusal for the sitcom to return to our screens once again. Now, we have learned to take all that we can get... so, naturally, any time that the gang is pictured together pretty much causes an international internet frenzy.

And although we haven't been deprived of mini cast reunions in the past, this one pretty much tops them all...

We waved goodbye to the Friends gang in an emotional two-part finale which saw the group leave Monica's apartment for the very last time, leaving their keys on the counter. It wasn't all sadness as Rachel finally admitted that she loved Ross and Monica and Chandler adopted two babies, but it certainly marked the end of an era.

Its no wonder that they're so close, after all, the stars spent a significant amount of time together while filming the sitcom over the decade. In fact, during NBC's Must-See TV: An All-Star Tribute to James Burrows three years ago, Jennifer Aniston, who played Rachel, said that the cast "fell in love with each other" over the years. "We experienced friendship, family, heartbreak, babies, everything, together," the actress explained.

Three years ago, the entire cast (minus Mathew Perry) attended the All-Star Tribute to James Burrows event together and it was everything that we've ever wanted.

While appearing on the Jimmy Kimmel Show in 2014, Aniston, Kudrow, and Cox, or should we say, Rachel, Phoebe, and Monica stepped back into the apartment that they'd left behind a decade ago for a one-off skit. It was the closest thing that fans got to an actual Friends revival.

Okay, that joke was bad... if you didn't get it, it was a line from the theme song of the sitcom. Anyway, just last year, Courteney Cox really was there for her pal, Jennifer Aniston, as the pair attended the premiere of Anniston's latest Netflix film, Dumplin'.

But this reunion has been topping them all...

It was Courteney Cox's 55th birthday on Saturday, and what a perfect opportunity for yet another cast reunion in celebration of the day. She had a low-key dinner to mark the occasion, but what we all really wanted to know was whether Kudrow and Aniston got an invite too...

Throughout the big day, a whole host of famous faces flooded Cox's Instagram with birthday messages.

One of the star's pals, Selma Blair, wrote: "Ah there you are! Happy birthday, angel face." But, who we all really wanted to see were her Friends co-stars, if they were even at the dinner in the first place, that is.

Well, it seems like fans got what they wanted as Cox posted this picture to her Instagram...

After Cox got an Instagram account earlier this year, fans have been eagerly awaiting a picture with her Friends co-stars, and now it seems like their wishes have been granted... The star posted the Rachel, Monica, and Phoebe reunion selfie with the caption: "How lucky am I to celebrate my birthday with these two??? I love you girls. So much," and it's honestly giving us all the feels. But there were even more images to come...

The comments will melt your heart.

"LOVE you girls! Happy happy Court," wrote Kudrow, who played Phoebe in the sitcom. The actress also took to her own Instagram page to write: "Just remembering Court, I will ALWAYS be older than you. HAPPY BIRTHDAY lovely Courteney!!" "Only wiser my sweet, never older. I love you," Cox replied. Unfortunately, Aniston (aka Rachel), isn't on Instagram, so no word from her, though we imagine she'd have similar things to say.

Cox's pal, David Spade, shared this snap of Cox and bestie, Jennifer Aniston, with the caption "Happy birthday to @courteneycoxofficial and her plus one. xx." We can't get enough of this.

As expected, Friends fans were loving seeing the girls together again...

People couldn't contain their excitement and it quickly showed... Cox was literally inundated with comments after uploading the snap.

One user wrote: "love that they are best friends in real life!," while another simply said: "CAN’T HANDLE".

Actress, Reese Witherspoon, wrote: "What a great gift!! Happy Birthday CC," while Big Bang Theory star, Kaley Cuoco, said: "This is so epic ?" after seeing the selfie. It seems like everyone loves a good old Friends get-together.

Despite claims from both the cast and the writers that it would never happen, Aniston said that she would still be up for reunion while being interviewed on the Ellen Show last month. Since then, however, she has explained her response while speaking to Entertainment Tonight, adding that, despite being open to the idea, there's nothing in the works right now.

So, basically, it's not going to happen.

So, with an official reunion well and truly off the cards, fans will have to make do with Courteney Cox's Instagram page to get their Friends fix.