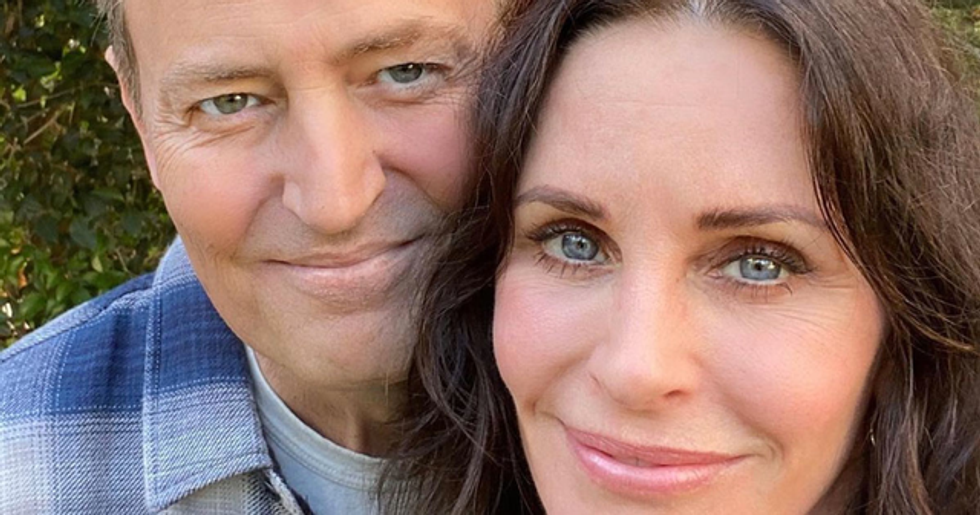 Yesterday, Courteney Cox shared a selfie of herself and fellow Friends co-star, Matthew Perry to her Instagram page, causing fans to completely lose their minds.

Perry has famously struggled with his health and, unlike his fellow castmates, he has kept a low profile since the finale in 2004. So when he unexpectedly re-emerged on his co-stars Instagram account, people were understandably very excited.

Well, they were until they took a proper look at his face, which looks a little, ahem, different.

It's quite clear to see that Perry's face has gone through a few changes, and fans can't decide what it is that makes him look so peculiar... Is it his hair? Has he had a nose job? No one is quite sure, but people are growing increasingly concerned about the actor amid all his aesthetic changes.

Keep scrolling to see the incriminating selfie, and to hear what people have been saying...

The cast have been pictured together more and more in the last few months...

But the one person who has remained absent in the recent influx of selfies?

Perry remains the only Friends cast member to have not joined Instagram...

While the rest of the cast have been working on various projects, Perry has instead remained out of the spotlight as he deals with health and addiction issues.

The actor has been quite unwell.

In August 2018, Perry suffered a gastrointestinal perforation that left him bedridden for three months. “Matthew was very sick when he was hospitalized; his condition was very serious," a source told PEOPLE. “Gastrointestinal surgery is very complex, and the healing can be complicated." This is all on top of his lengthy battle with addiction.

But, thankfully, he seems to be on the mend...

Because he has been out and about lunching with his old Friends colleague, and on-screen wifey, Courteney Cox.

Courteney posted a cute selfie from their lunch date yesterday...

And she captioned it perfectly with a very Monica-Esque quote, writing, "Guess who I had lunch with today...I KNOW!! Could I BE any happier?"

The pair haven't been pictured together in years...

So, of course, people were very excited about the selfie, particularly other members of the Friends cast. Lisa Kudrow, who played the eccentric Phoebe Buffay, commented, “Lucky lucky. #beautifulpeople." While Jennifer, using her freshly activated Instagram account commented, "MATTY!! I LOVE YOU, GUYS" with a series of love heart emojis.

And many were quick to drop their finest Friends quotes...

One Instagram user commented, "Chandler finally learned how to smile in front of the camera", while another wrote, "MY EYES! MY EYES!!" Whether or not this confirms a reunion, we don't know. But what we do know is that it's amazing to see the Bings back together again.

But, as much as we love to see Monica and Chandler reunited...

There's one thing that many people couldn't help but notice...

It just looks... Different. And we can't put our fingers on what it is that's so different. Is it the color of his hair? Has he had cosmetic surgery? Why are his lips that color? The questions are endless.

Just for a bit of comparison...

Here's Matthew as we usually recognize him as best.

And people are seriously creeped out.

Is it Matthew? Or is it an impostor posing in his place?

Some aren't convinced he's even real...

Maybe Courteney is simply stood with a waxwork figurine of Matthew, instead?

And others have some interesting theories...

Maybe Courteney is just sneakily using the FaceApp filter on her old pal?

But the resounding theme of people's thoughts...

Good, old fashioned plastic surgery. It's what all the other Hollywood stars do, right?

Maybe that's the only explanation for Matthew's (and Courteney's...) altered features?

Yes, Courteney wasn't forgotten in this debate. It's undeniable that she looks a little different these days too...

The actors are simply aging? It's common knowledge that your looks change as you get older, so maybe this could simply be the case for Matthew and Courteney.