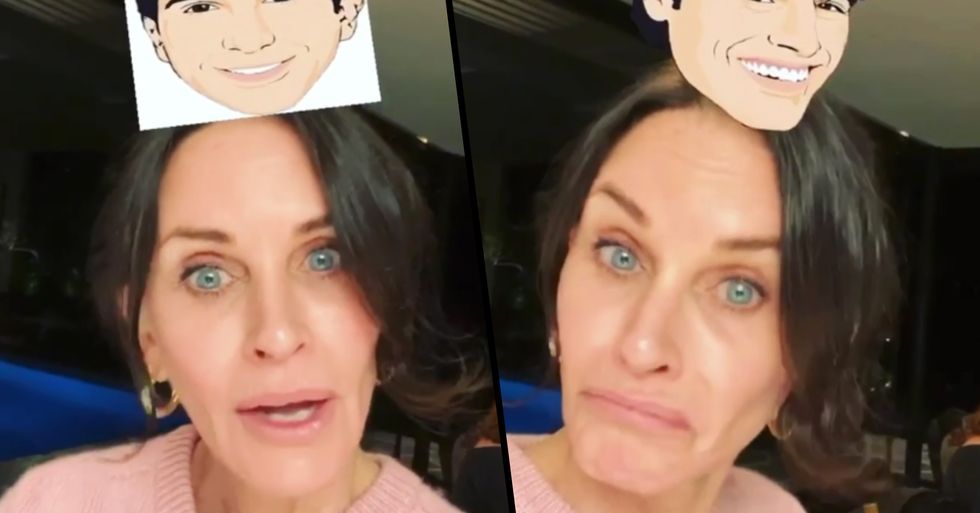 And as Netflix has taken our love away from us, we're left waiting for little bits of Friends content online. Luckily, the stars don't disappoint on social media - and Courtney Cox's latest escapade is pretty hilarious ...

Friends was a Netflix binging favorite.

But at midnight on new year's eve, the show was removed from the streaming platform for good. Hearts around the world were broken by the news.

Where were we going to get our Friends fix now?

The cast are all pretty active on social media - with Courtney Cox being a real Instagram-aholic.

And this week, she's made a hilarious social media move.

It involves the recent filter trend which shows users a fact about themselves - from what 2020 holds to which Pokemon they'd be. But there's also a Friends version of the filter.

And it seemed to give Monica some trouble.

First, she got Rachel - although she was pretty excited about it!

She then got her onscreen brother, Ross.

Cox seemed a little less thrilled about this one. Well, we all know Ross is kind of the worst, right?

Next, she got Joey.

To bo honest, her facial expression here is pretty Joey-esque.

Cox then got Phoebe.

By this point, she seemed pretty shocked at the inaccuracy of the filter!

And then she got onscreen hubby, Chandler.

Cox was looking pretty exasperated by this point!

Seems it was sixth time lucky.

Because finally, on her last try, she finally got Monica - the actual character she played.

Fellow actress Jennifer Garner commented what all of us were thinking!

"Finally got Monica...thought I was gonna be Ugly Naked Guy for sure! #identitycrisis" she joked. Fancy more Friends content? Scroll on for the incredible themed version of Cards Against Humanity. It's just as good as you'd hope ...