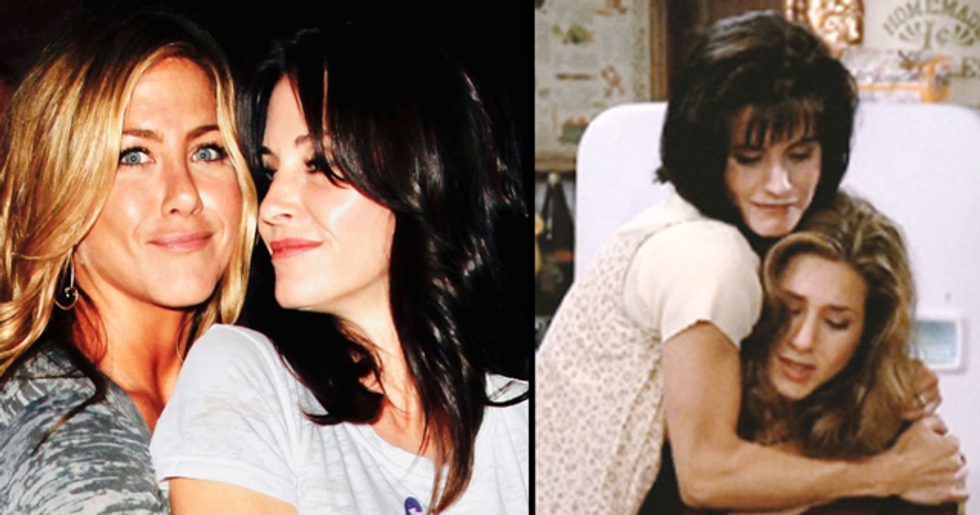 Jennifer Aniston is a woman of many talents.

Number one on the list of her many talents being her ability to have everyone like her.

Ask yourself... who doesn't like Jennifer Aniston? I mean really dislike her, dislike her so much they wouldn't watch her movies or copy her hairstyles...

Still thinking? Of course, you are because no-one dislikes Jen. As I said, it's one of her talents.

And what greater way to demonstrate the universal likeability of Jennifer Aniston than the declarative proof of social media.

Jen joined the world of Instagram on October 15th and in doing so broke the internet.

The surge of fans rushing onto their Insta accounts to follow the Friends star was so overwhelming the server crashed.

It's little surprise then that today it's been revealed Jen set a new Guinness World Record.

But even better than that was the comment Cournety Cox left for her ex-Friends co-star.

For anyone that grew up watching Friends as I did, the hours spent watch Jen and the gang flounder between the coffee house and Monica's apartment filled us with something more than a sense of familiarity. Those five characters really did feel like our friends.

But just like friends, we make in real life...

When you haven't seen each other in a while you can drift apart. Distance really can make you become distant. This is how I feel about all of the other cast members of Friends, the T.V show. We've all grown up, me included, and we don't recognize each other anymore.

Except of course for Jen, who never left.

Jen's the friend that never stopped returning our calls, Jen never went off on a three-year trip around South-East Asia to go "find herself", Jen stayed right here. I swear that woman can't have taken a month off from filming for the past two decades- not even for one of her honeymoons. Aside from Friends, Jen has starred in over fifty roles. Meaning that Jen has never been more than a movie trip or a Netflix click away.

Why fix what isn't broken, right? Jen has always appreciated a level of privacy from the public. By opening up herself to the intrusion of social media, isn't she asking for trouble?

Maybe Jen is just trying to fit in?

I mean, who hasn't got Instagram nowadays? (well actually, I don't but I'm also not a public figure.) Anyone who's anyone has Insta in this day and age and despite being social media phobic, the assertion that Jen felt compelled to join the hype shouldn't be that surprising.

One of Jen's closest gal pals, Courtney Cox has been on Instagram for years. It wouldn't be surprising if Cox was the one that persuaded Jen to take the plunge.

Matt seems to be clued into the fact that Insta is a good way of keeping the world up to date with your career. Gone are the years of people googling, "what's Matt Le Blanc doing now?" If anyone is wondering about his current projects all they have to do is go on to his Instagram. Oh look - he knows Gaga, who knew?!

Aniston's little sister from her Friends days and current co-star in the highly anticipated Apple TV project, The Morning Show is Insta-spiration. Not only does Reese promote her current projects, but she navigates the platform to promote her causes, raise awareness about things that are important to her and run her successful "book club." "Reeses Book Club" has an account of its own, with an impressive 1.2 million followers. Its aims are to showcase great books written by women and to encourage people to read them. Reese selects one book a month and opens up a discussion about the novel in the comments.

Reese is extremely open on her Insta.

It seems Witherspoon isn't afraid to share her intimate thoughts with her fans. Scattered amongst her posts about her current projects, her monthly read, her kids and her friends, Reese posts thoughts and advice she wishes to pass on with the world.

We're all wondering one thing...

How's that for some morning news?! #JenniferAniston has joined the @instagram world and now I can finally tag her i… https://t.co/0zS2XrWucO
— Reese Witherspoon (@Reese Witherspoon)1571168936.0

How active is Jen going to be on her Instagram? Will she be as active as Reese, will she post sparingly, will she delete it after such an overwhelming response? Or will she, as Witherspoon suggests, just use the platform to check out memes?

After posting the Friends reunion picture many fans claimed they spotted a suspicious-looking substance on Matthew Perry's phone. The highs and lows of making your private life public, eh Jen!

New to the app, Jen's still working out what it's all about.

Is it about sharing photos of your friends with the world? Is it about promoting your current projects? Or... is it a way to stalk your ex?

Jen's ex-husband, Justin Theroux was quick to comment on the actress's first Insta post. He appeared to celebrate that his ex was now on the platform as well as celebrating that he was one of the first to comment... with the hashtag #first.

Surely it's a good thing that Jen is on good terms with her ex?

That is to say, perhaps seeing what each other is up to constantly through the rose-tinted window of Instagram might not be the best thing that ever happened. I don't know what kind of Insta user Theroux is but it wouldn't surprise me if he posted a lot of late-night stories with come-to-bed eyes.

Justin posted a pic of Jen on her 50th bday.

Despite the fact that they got divorced it is clear these two are still good pals. Although given that Aniston didn't have Instagram at the time you could say it was a bit of a peculiar channel to go through to wish her a happy birthday...

I wonder if Brad Pitt will ever get Instagram.

Surely that would break the internet, no? Before you get excited though, it seems unlikely. E! News actually asked Pitt is he would ever get Insta earlier this years. During the press tour for Tarrinto's Once Upon A Time In Hollywood, Brad made it clear he had no intention of ever joining the platform.

Brad made a firm statement that he would not be joining Insta. Before backtracking a little and saying, "Well, I never say never. Life’s pretty good without it. I don’t see the point." The fifty-five-year-old actor might not have seemed keen a few months ago, but given that Jen's now on Insta who knows if he'll change his mind.

That is of course because Jen has opened up that door to her private life we all thought was shut forever.

This has sent major Jen fans into overload.

Jen has opened up a can of worms for her obsessed fans to gobble up... Who is she following? Why hasn't she followed them back? What does that post mean? Will she see my comment? Has she seen my comment? Jen! Did you see my comment?  You get the idea.

In a reaction to the fact that by creating an account she managed to break the server, Jen posted a hilarious video. In the video, the actress seemingly overwhelmed by the Instagram notifications on her phone hits it against the table. Well, I guess that's one way to celebrate your world record, Jen!

And the title for the most popular woman in the world goes to...

Why Jennifer Aniston of course! That's right, Jen ended up entering the Guinness World Record books for reaching one million followers in the shortest time of anyone on Instagram ever before. As of writing this article, Jen now has an impressive 11.6 million followers and the count just keeps going up and up.

Jen has snatched the record right from under Meghan and Harry's royal noses.

Prince Harry famously had a big crush on Aniston...

Multiple sources have claimed that a young Prince Harry was obsessed with Aniston, (I mean who hasn't had a Jen phase?) The Prince was so into Aniston that he reportedly once got hold of her number and sent a cheeky text. Needless to say, love didn't blossom. But thinking about it now, just imagine how quickly those two could have reached a million followers. Instagram would have literally exploded.

The best part of Jen's Insta debut, though?

It has to be the comments from her Friend's castmates. We can basically hear Phoebe saying this.

But the best comment award? Well, that has to go to Courtney Cox.

She left this iconic comment underneath Jen's first post - and any Friends fan will recognize where it comes from immediately.

Because it's not just a Friends reference.

It dates way, way back - to the very first ever episode. So cute! Continue scrolling to read all about the current state of Jen's dating life and how she still chats to Brad Pitt...