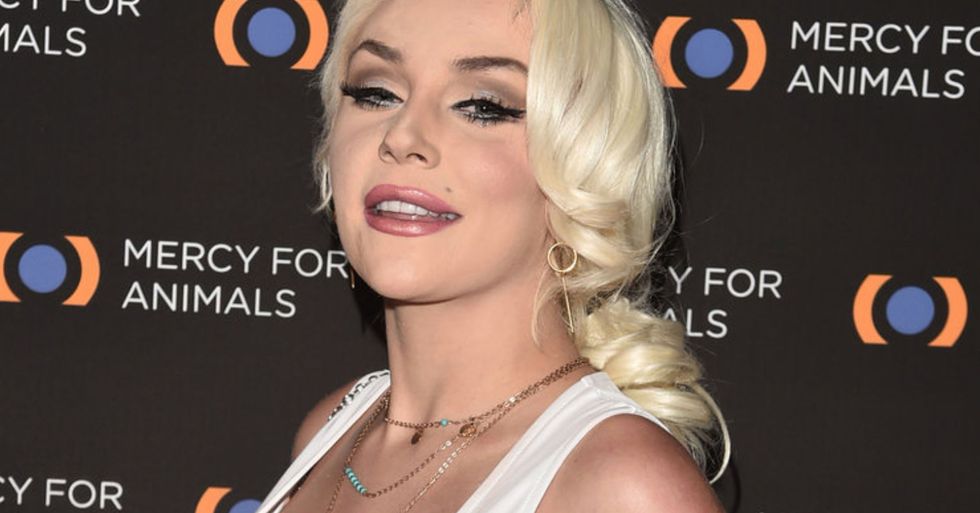 International Women's Day has just been and gone, and the entire world used the day to celebrate and commemorate powerful women.

Courtney Stodden had a very unique way of marking this day, however, and it involved her stripping bare for the world to see.

A few days ago, we celebrated the annual International Women's Day.

This special day comes around once a year to celebrate the successes of powerful women all around the world, and most importantly, it is also a great opportunity to remember the history of women.

This year was all about the importance of equality...

And how far us women have come over the years to earn our rights to an equal life.

Of course, we have the Suffragettes to thank for the current equality women have...

In the early 20th century, many Suffragettes died protesting a woman's right to vote in the U.K, and if it wasn't for them, things may be very different today.

But it's no secret that many women still fight for equality to this very day...

Especially in the entertainment industry.

Not only do many women in this industry get paid much less than their male colleagues...

But many have also fallen victims to sexual harassment and assault behind the scenes.

This topic is a huge concern for women...

CNBC ran a survey and found that workers in front and behind the camera agree that discrimination and harassment remain top of mind for many women across the industry.

But the majority of women feel too frightened to report this toxic behavior...

It was also found that while many were witnesses to this bad behavior, very few felt comfortable enough to report it.

The Harvey Weinstein trial is a prime example of this...

In 2017, allegations of sexual abuse and harassment publically came out about the Hollywood director from actresses such as Rose McGowan and Ashley Judd.

More and more women from the entertainment industry eventually came out accusing the disgraced director of assault and abuse...

Even though justice has been served...

There are way too many women out there who experience this type of assault on a daily basis and they are simply too afraid to speak out.

But thanks to the brave women who stood up against Weinstein...

More and more women are feeling confident enough to stand up for themselves and speak for what they believe in.

And, of course, International Women's Day is the perfect day to celebrate this.

Many powerful women came out to post words of support and encouragement online to their fellow femmes, including the likes of Michelle Obama, Greta Thunberg, Nicole Kidman, and Ashley Graham.

Chelsea Handler told us to thank the women around us.

And she decided to throw in a sly nudge at the trump administration too.

Kris Jenner asked us all to "celebrate."

To all women and girls reading this, today let’s celebrate!! Celebrate who you are today and who you will become to… https://t.co/yBjDjTt30q
— Kris Jenner (@Kris Jenner)1583681651.0

George Takei also had a few words to say...

Overheard: Typical that we couldn't even give women a full 24 hours for #InternationalWomensDay.
— George Takei (@George Takei)1583699470.0

She honored her favorite women with a playlist.

Patricia Arquette was especially grateful to her mom on this special day.

Happy #InternationalWomenDay Sending love and Thanks out to all of you incredible women!! Especially grateful to my mom! ❤️
— Patricia Arquette (@Patricia Arquette)1583687133.0

It's a day to be thankful for all the grateful women in the world.

Alicia Keys had some wise words...

Today, and every day, we commit ourselves to the ongoing fight for genuine equality for all of the world’s women an… https://t.co/OxozPBxl39
— Nancy Pelosi (@Nancy Pelosi)1583687430.0

She wrote: "Today, and every day, we commit ourselves to the ongoing fight for genuine equality for all of the world’s women and girls."

And Super Bowl performer Shakira shared some of her inspirations.

Two women I admire are @MichelleObama and @Malala, thank you for standing up and setting examples for women around… https://t.co/atAgox2fex
— Shakira (@Shakira)1583692739.0

3 of the most inspiring women in the game in one tweet? We're living.

She urges us to raise awareness against gender bias.

It’s #InternationalWomensDay and I’m celebrating all of the strong, women of choice all over the world with this pl… https://t.co/qxftW9OX6f
— Lady Gaga (@Lady Gaga)1583693015.0

It's time to update your playlist, ladies!

Bernie Sanders obviously dropped his name into the hat.

Women in the America and across the world not only deserve full gender equality, but also racial justice, economic… https://t.co/pxTXu8exmJ
— Bernie Sanders (@Bernie Sanders)1583692286.0

Michelle Obama is a queen.

This #InternationalWomensDay, let’s work together to empower the next generation of women. That’s the idea behind… https://t.co/IHE4g7ZFQT
— Michelle Obama (@Michelle Obama)1583672514.0

It's all about empowering the next generation.

She told the story of a brave woman named Hasina. It's a moving piece.

It shows her, her mom and her sister all hugging. Aw!

And here we have Kate Upton and her family.

The photographs are beautiful.

And Ashley Graham's post revolved around her becoming a mom.

It's real and raw.

Camila Cabello posted quotes from her most inspiring women.

And they are well worth the read.

And of course, the woman of 2019, Greta Thunberg said this:

"Today is #InternationalWomensDay and we recognize that women are still far from equal to men in today’s societies. We still have a very long way to go..."

And Dwayne Johnson posted the most adorable photos.

And his caption read: "Pōmaikaʻi. Blessed, strong and the world will hear from you one day."

Kesha's also had a difficult few years so this day was important to her.

Her caption was heartwarming.

And Tom Brady honored the most important women in his life.

He wrote: "These women make my world go round! Happy international women’s day!"

However, one of the most controversial posts was from Courtney Stodden.

Courtney is best known for being a model, a social media personality, and for her appearance on the U.K. reality TV show Celebrity Big Brother in 2013.

The twenty-five-year-old has had a whirlwind life so far...

And her bizarre relationship with fifty-nine-year-old Doug Hutchinson was something that plunged the young woman into the limelight.

Courtney was only sixteen when she became involved with the fifty-year-old actor...

And despite the pair eventually marrying (and then splitting up), this caused a lot of controversy and problems for the actor's career, with him being labeled as a "pedophile" and a "predator."

But through the backlash...

Courtney has come out as a stronger woman and she isn't afraid to flaunt her confidence.

And in aid of International Women's Day...

Courtney decided to post the most revealing Instagram snap yet to commemorate women's rights and the powerful figures of this generation. "About yesterday for women’s day. I chose these women because they’ve all survived so many ups and downs. There are many other beautiful women I wanted to choose but my body isn’t big enough for all of those warriors! Every day should be women’s day so much love to my fellow survivors of violation and abuse. We are MORE than what others see. Much love and positivity girlies," she wrote.

It certainly isn't one to be missed...

Make sure to click here to check it out.