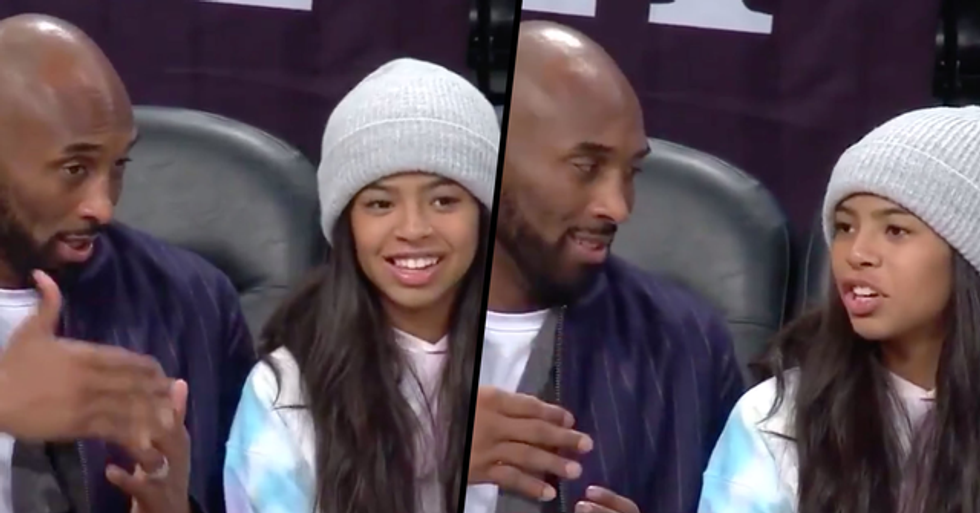 Yesterday morning, aged only forty-one, the legendary NBA star, Kobe Bryant, died in a horrific helicopter crash. And, to make this accident even more tragic, the basketball player was sadly accompanied by his thirteen-year-old daughter, Gianna Bryant, who also died in the crash.

Gianna was set to follow in her dad's footsteps and had a promising future in basketball ahead of her before her untimely death.

Heartwarming stories have been emerging of the father-daughter duo and the unique bond they shared. And now, a special moment shared between the pair while watching a game courtside has resurfaced, and it is truly heartbreaking.

Keep scrolling to watch the footage...

Various stories of the father-daughter duo have been emerging since their untimely death...

And it is quite evident that the proud dad had big dreams for his daughter.

Bryant has discussed Gianna's future in basketball several times in the past...

And Gianna's resilience and passion for the game was quite apparent.

We all remember the time Bryant was asked if Gianna “might want to play in the WNBA..."

And, while appearing on the Jimmy Kimmel Live show back in 2018, the evidently proud dad replied, “She does, for sure!"

Kobe was consistently urged to have a son in order to "continue his legacy"...

But Gianna wasn't having any of this.

Not one to let her gender define her basketball success, the teen called out the fans for their comments.

And Kobe simply couldn't contain his pride, as he beamed and applauded along with the audience after telling his daughter's story.

And the interview only offers only a tiny fragment of the special bond the player had with his teenage daughter.

Basketball was what united the pair...

And Gianna dedicated her life to the game before it was abruptly cut short.

And now, fresh footage has resurfaced of Kobe with his daughter...

That only further commemorates their love for basketball and the special relationship they had.

The footage is only from last month...

On December 21st, Kobe and Gianna attended a game between the Nets and the Atlanta Hawks at Brooklyn’s Barclays Center.

As Kobe talks his daughter through the game.

Kobe can be seen explaining the game to Gianna...

Who sits and listens intently, smiling and nodding along as her dad talks her through the technicalities.

Gianna can be seen discussing the game with her dad...

Before the pair dissolve into laughter.

It's a truly heartwrenching watch...

And, after their death, the clip was quick to go viral with 1.5 million views, 99,300 likes, and 22,100 re-tweets. You can see the beautiful moment for yourself above.

It's a truly devastating loss.