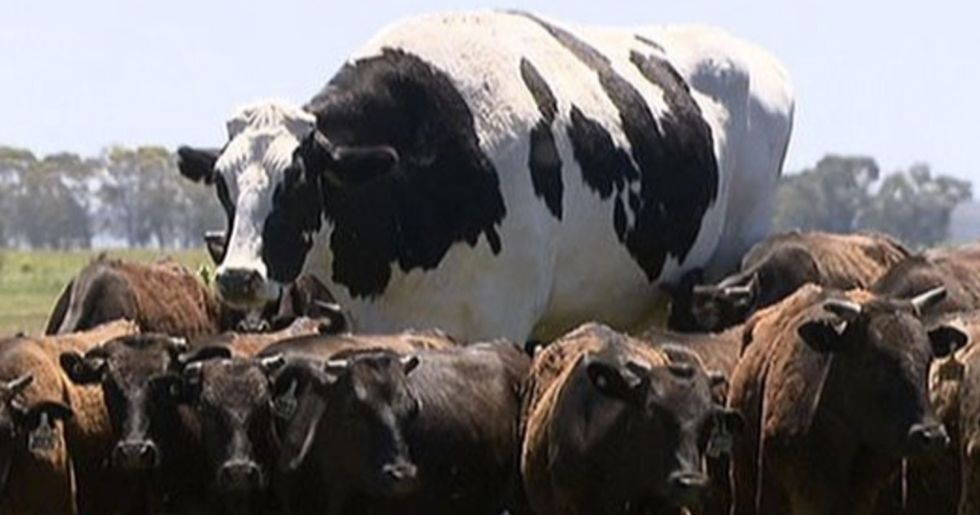 Cow Is Saved From the Slaughterhouse Because It's so Freakishly Big

You've probably heard of Clifford, the Big Red Dog. Godzilla is a given, obviously. And we definitely know about King Kong. What do these three all have in common?

And yes, before you roll your eyes, a children's dog does have something to do with the other two terrifying creatures. They're all huge!

But have you ever heard of a giant cow? Get to know Knickers, the huge cow in Australia who is so big– it can't be killed. That's right animal lovers, rejoice! This hefty buddy has been saved from the slaughterhouse because of his size. Instead, the cow will live out his days, grazing grass and feeling confident with of his all 308 whopping pounds of cow glory.

It should be common knowledge by now, that they make them big down in Australia.

Seriously, what are they feeding those Hemsworth boys? Does anybody have an answer?

But who knew they grew their animals as big as their men?

I mean, Australia is known for its rugged outback, but still. A 308-pound cow is next-level monstrous.

Knickers stands at a massive 6 foot, 4 inches tall– he is roughly the same height as legendary basketball star Michael Jordan. That would be an interesting game of one-on-one, wouldn't it?

He absolutely towers over the rest of his cow friends.

The Australian farmers simply can't bring themselves to slaughter the beast, unlike his cow friends. Knickers' owner, Geoff Pearson, said, "It was too heavy. I wouldn't be able to put it through a processing facility. So I think it will just live happily ever after."

I'm not, crying you're crying!

Pearson initially bought Knickers for $400. The cow's role was to be the "coach" of the cattle. A coach is a castrated male cow which leads the others in the cattle.

"He was always a standout steer from the others, a bit bigger than the rest." Some cows are meant to walk in the light.

Knickers is quite the popular cow on the farm.

Pearson told local news that he is popular amongst the other cattle. Pearson has around 20,000 animals on his farm. Is everything super-sized in Australia?

But how did Knickers get his name?

It's a funny story that Pearson tells the local news: "When he was young, when we first got him, we had a Brahman steer [a breed of cattle] which was a friend of his. So his name was bra...so we [had] bra and knickers. We never thought he would turn into such a big pair of knickers."

Okay, is Pearson a stand-up comedian? I'm all here for this word-play!

Knickers bring about a much more serious question? Why are giant animals so cute?

Look at this tubby thing.

He's way bigger than the boy, that's for sure. Oversized animals are adorable. Of course, it's always important for an animal's health to be put first– but some of these pics are too much to handle.

Have you ever seen a chubby duck?

Now that I have, it's the only kind of duck I want to see.

Those feathers probably keep that chicken nice and warm. What a cute little guy.

Is this dog okay?

He's got weight issues, sure, but look at that face.  He's so cute, it's hard to look away.

That squirrel is going ham on that nut.

Squirrels have to get theirs too!

Is it weird to call a donkey thick?

Whatever, I did it, and this thick donkey is too adorable. Live your truth, thick donkey!

That's a big boy. Poor guy, maybe he needs to run up and down more trees?

A lap cat is a dream, and this pet owner is clearly in heaven.

I have never seen such a large raccoon. Somebody need to call animal services, ASAP.

That is quite the fancy collar. Sure, he's not as big as Knickers, but that's a big cat.

Me after a long day of work.

I have never related to a cat more. This is like looking directly into a mirror. What does it say about yourself when you relate more to a cat than to any humans in your life? I'm asking for a friend...

What a regal, majestic creature!

Somebody sign this cat up for a remake of The NeverEnding Story.  This cat is going after the role of Falkor.

When you're over life.

Again, what does it mean to relate so strongly to a cat?

This is what I would describe as, "A perfect meme."

I'm pretty sure this isn't a cat, but an amorphous blob.

Is this a dog or giant hot dog bun?

The look in his eyes says, "Help me."

So what has Knickers taught us?

That oversized animals are adorable and there's no getting around it.

How I felt after Thanksgiving...

This cat's facial expression is everything.

If they need an understudy for Simba...

This is the cat for the job!

Knickers may be a giant cow all the way in Australia, but there's plenty of large animals out there!

Animals forever. Share this with your friend who is obsessed with cows!