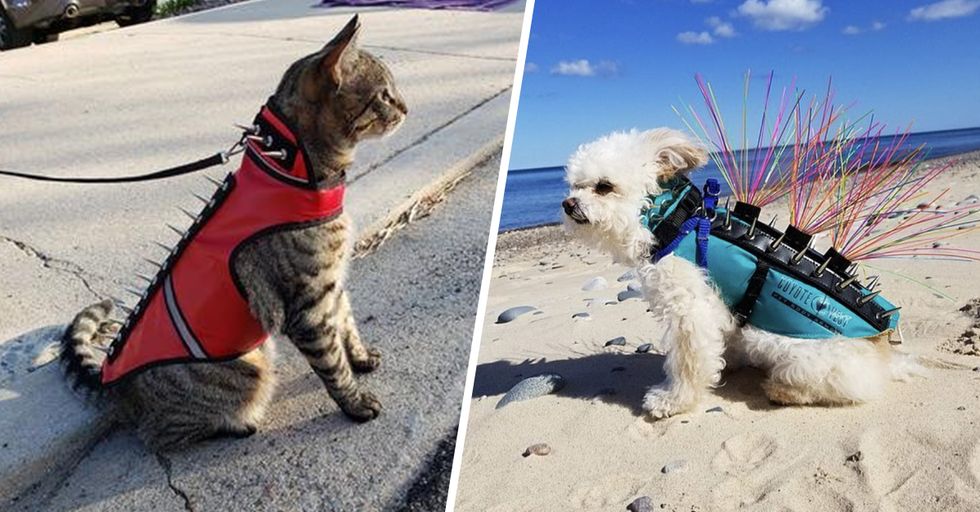 Sometimes the internet is a terrible place, but every once and awhile it's a beacon of hope that shines through clouds of perfection. And those times should be celebrated. Especially when they are as good as this. This week the internet gave us one of the greatest gifts it has given us yet. That gift: the coyote vest.

Have you seen the coyote vest yet? If not, you are in for a treat. You won't believe your eyes, it's that good. It's as if 2018 looked around and said, "wow it's been a rough year for everyone, how about a little pick me up?" And honestly, we deserve it.

This dog is wearing a "coyote vest."

How cute is it?

The photo of Beanie the dog in his adorable coyote vest quickly went viral.

People were obsessed with her look.

Everyone had a reaction.

Some people even wanted one for themself.

It's not a bad idea.

And some people had ideas for other uses for the vest.

But the question on everyone's mind was: what exactly IS a coyote vest?

I mean, it definitely looks awesome and I'd put my dog in it for sure, but what does it do?

It turns out the vest is a really smart idea.

Coyotes have become much more common in the United States. Once animals that roamed the West in the mountains and deserts, coyotes have moved further east and thrive living in urban areas. Every major city in the US is now home to coyotes, whether you have seen them or not.

A single coyote can take down a small deer, so a family pet isn't much of a match for a hungry coyote. And sadly, many people in the US lose their pets to coyote attacks every year.

That's why a company called Coyote Vest invented a vest that can protect your pet from a coyote attack.

The founders of the company lost their small dog to a coyote attack and decided to develop a product that would stop future attacks.

Here's how the vest works:

First of all, it's bright colors and strange appearance makes your pet look strange to coyotes. (But awesome to humans).

The vest is made of Kevlar, so coyotes can't bite through the vest if they try to grab your pet with their mouth.

The vest is also covered in spikes that make it difficult and uncomfortable for a coyote to pick up a small animal wearing the vest.

The vest has optional whiskers that velcro to the back.

The whiskers poke the coyote in the eyes and mouth if they try to bite down.

The vest can also protect small animals from hawks.

One version of the vest has an even thicker Kevlar strip on the back to stop hawks from using their sharp talons to pick up small animals.

The vests are a little pricey.

They start at $100 for the basic vest and then go up in price as you add extras like the whiskers or a flashing LED light.

But it does give you peace of mind.

Oh, and the best part?

The vest were originally made for dogs, but that doesn't mean only dogs are rocking the look.

Cats can wear them, too!

And they look just as cool, maybe even cooler.

Cats look great in it.

Even baby goats can wear them!

Can you even handle how cute that is? No. You can't. Nobody can. It's too cute.

I could look at photos of dogs wearing this vest all day.

Every single dog looks amazing in it.

So safe. So cute.

And now punks can finally match their dogs!

Many people pointed out that this was also a good idea to stop larger dogs from attacking smaller dogs.

And without having to hurt the larger dog.

Some people even shared scary experiences they'd had with coyotes.

And if you don't have a dog, there are other uses.

Once again, look how cute they are.

This dog is cooler than any of us will ever be.

I could really look at these all day.

But today isn't your day.