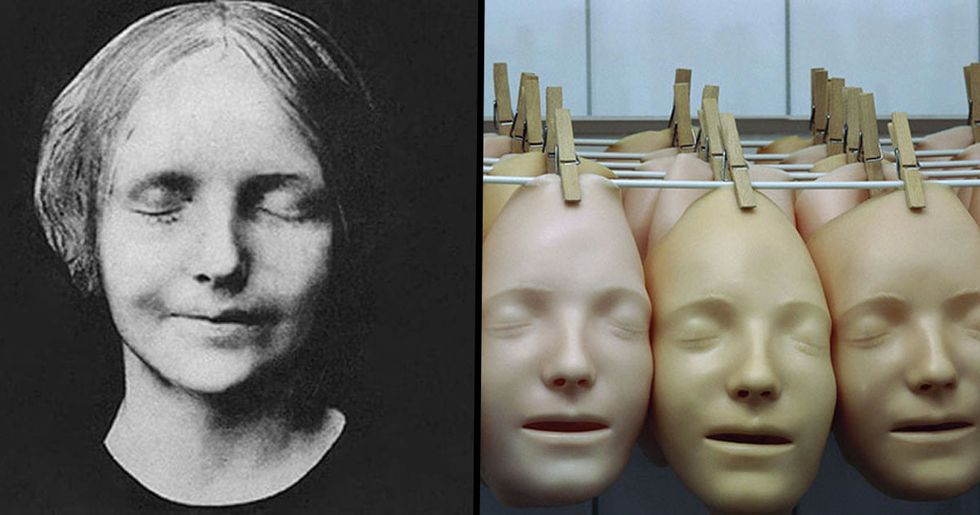 We all know that CPR dolls are pretty creepy, right? They have that uncanny valley phenomenon of looking really close to a human being - but still manage to ever so slightly miss the mark. But now, the most famous CPR doll's face has had its origins revealed - and they're even more horrifying than you might have imagined.

In spite of not being named, it's likely that you'll recognize the CPR doll face. It's actually an artwork called "The Unknown of the Seine," one of the most famous faces in art history, and it's based on a real (albeit unidentified) girl. And once you hear the creepy story of how the girl's face became so famous, you'll never be able to look at a CPR doll the same way again.

There are some things that we, as humans, just find universally creepy.

And one thing that we can all pretty much agree on? Dolls can be amongst the most frightening things out there - particularly when you consider that we give them to kids to play with.

But there's one doll out there who's creepier than most.

The CPR (Cardiopulmonary Resuscitation) doll is used to train people in the art of restarting someone's breathing, therefore saving the lives of millions. It's certainly a useful item - but that doesn't make it any less frightening.

But it turns out that this doll is even creepier than we first thought.

Aside from the fact that it resembles a human in a terrifying, corpse-like way, there's a backstory to the CPR doll that has the whole internet freaking out.

There's something that you may not have noticed about CPR dolls.

It seems that the vast majority of them have the very same face. And when you find out quite how this face came to represent CPR everywhere, you'll probably be feeling a little freaked out.

Our story starts in a fairly unlikely location.

Paris, France - in the late 1880s, no less. Because, believe it or not, the CPR doll's face is actually based on a very real figure.

And to make matters even creepier?

It's actually based on something known as a "death mask" - a wax casting taken of somebody's face postmortem.

The cast in question is called "The Unknown of the Seine."

Or, in French, "L’Inconnue de la Seine." The death mask belongs to a young woman pulled from the River Seine in Paris, France, in the late 1880s.

The face seemed to fascinate anyone who looked upon it.

The identity of the woman is still unknown, although coroners put the female at around just sixteen years of age, thanks to her smooth skin and youthful features.

But there's another reason that the death mask was so appealing to some.

The expression on the girl's face seemed to entrance those who looked at it. Many have speculated that this is because of the strange contrast between the acknowledgment of death and the look of pure peace that the face appears to express.

Thought that was creepy?

Well, how about this: it's widely accepted that the cause of death of this young girl was suicide, thanks to the lack of physical harm done to the body, alongside her young age.

But it seemed as though the attraction to the face was strangely universal.

The pathologist who examined the mystery corpse created a mask based on her - and he wasn't alone in his positive feelings, as many copies of the mask were created.

And then the story gets even stranger.

Because this mystery death mask became a bizarrely trendy piece of home decor for Parisians in the nineteenth century, with many displaying it as a piece of artwork.

Even Albert Camus was a fan.

He reportedly compared the expression of the "Unknown of the Seine" to the famously enigmatic Mona Lisa smile.

And then, things took a turn for the even weirder.

Because people were so obsessed with this dead girl's face that it ended up being a recurring inspiration in lots of artwork, and even in some works of literature. But it also inspired something pretty surprising.

When Peter Safar and Asmund Laerdal were first designing the first aid tool, it seemed to them there was just one obvious choice for the face - the "Unknown of the Seine."

The CPR doll in question?

The first aid doll that you want to look out for if you're searching for the infamous death mask is called the "Resusci Anne."

But it gets even creepier.

This poor, unsuspecting, nineteenth-century, probably suicidal French teenager has now been dubbed "the most kissed face of all time."

Although, maybe that's not as creepy as this sight.

Some on the internet have pointed this out.

This whole death-mask story is eerily reminiscent of Arya Stark's faceless girl storyline on Game of Thrones. Although, at least that was just a fantasy - this is real life!

So, just when you thought that dolls couldn't be any creepier?

Just remember that the CPR doll that you may be training to save lives on is actually a replica of a very real dead lady. And, if you're in the mood for more nightmare-inducing content, keep scrolling for a story about a seven-year-old who had an unbelievable 526 teeth removed. Yikes.