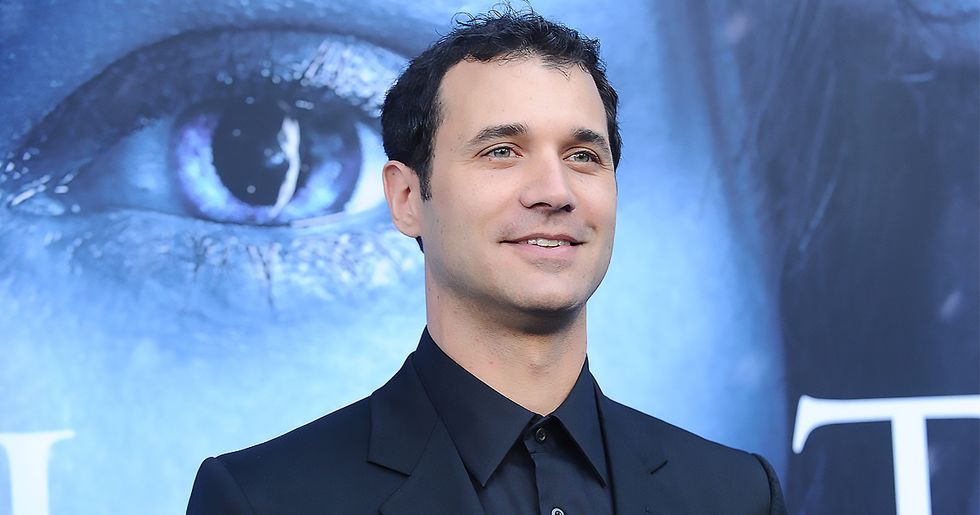 Internet fan theories are often better than the show, movie, or book that they're inspired by. Think of the Knight2King theory from Harry Potter, which suggested that Ron Weasley would go back in time and become Dumbledore, or the theory from Lost that said that baby Aaron was a reincarnated Boone (which I still think is true, by the way — Boone was always a total baby).

Game of Thrones definitely had its share of fun fan theories that didn't pan out, from Bran becoming the Night King to Tyrion revealing that he's another secret Targaryen. But the biggest fan theory that didn't come true almost seemed like it wasn't a theory at all. It really seemed like it was just going to happen.

Game of Thrones fans thought that Jaime and Brienne would get married.

And although that's not the way that things went down, the show's composer did just reveal an interesting little tidbit that suggests that there was more to Jaime and Brienne's relationship than we thought...

Game of Thrones’s final season let down a lot of fans.

@GameOfThrones Well I felt that was a let down! Waited 2 years for that!! Sorry #GameOfThonesFinale you could have… https://t.co/N7MoHuYOxW
— Tasha Binfield (@Tasha Binfield)1558387208.0

When you spend eight years watching an epic story build, is it too much to ask for the conclusion to be similarly epic? For Game of Thrones devotees, the answer turned out to be yes.

From Daenerys’ sudden turn to evil...

One of the story's primary heroes went straight psycho and burned a city to the ground. It's like the producers of the show didn't even care about all of the baby girls named "Khaleesi."

... to the weird decision to make Bran king.

After seven and a half seasons of back-alley plotting and grand machinations to install various contenders to the throne, the final season of Game of Thrones saw the main characters get together in a room, shrug their shoulders, and crown a wizard boy who creeped them out.

The whole thing felt off.

Since season six, none of the characters in Game of Thrones have felt like themselves. Twitter user, @DSilvermint, theorized that the shift from pantser to plotter turned the characters into the nonsensical, hollow versions of themselves that we saw throughout the last season.

And that feeling was most prevalent in Jaime Lannister’s story.

The final season of Game of Thrones saw a lot of characters behave in ways that were incongruent with the ways that they'd acted before, but none more so than Jaime Lannister.

Like, he really really loved her. Jaime and Cersei Lannister were identical twins, so they came into the world together. The weird part is that once they were in the world, they carried on coming together.

But he also grew close to Brienne of Tarth.

Charged in season two with finding and returning Sansa and Arya Stark to their mother, Catelyn, Jaime Lannister and Brienne of Tarth embarked on a journey together that would change them both.

And the sexual tension was palpable.

Even though they were constantly bickering, Jaime and Brienne came to understand each other, to care for each other. And, soon, anyone watching the show who had a functional heart came to root for the dishonorable Kingslayer and the honorable Lady Brienne.

And Jaime and Brienne did get together! For a minute...

But after consummating their relationship, Jaime bailed at the last minute and ran back to Cersei, breaking Brienne's heart.

This came after what was perhaps the most emotional scene in the entire show: Jaime's knighting of Brienne.

Brienne wanted nothing more than to be a knight but lived her entire life thinking that it wouldn't be possible, that women couldn't be knights. But Jaime changed that, invoking the rule suggesting that one knight can knight another. It's a testament to the importance of knighthood in the Game of Thrones universe that every knight ever knighted didn't immediately start a side-hustle knighting anyone with a few Gold Dragons to spare.

it’s been a month since Jaime and Brienne kissed, had amazing sex for the first time, god married and sailed away t… https://t.co/uChRKyShkY
— ͏faith (@͏faith)1559745330.0

This is the kind of tweet that you see when a fandom is so devastated that they literally can't accept what's happened. Maybe they should take a cue from Sansa Stark and look the truth in the face.

Jaime's storyline was a potentially interesting comment on the nature of man.

Jaime Lannister started the show as a little boy-murdering, incest-committing d-bag and became one of the most beloved characters on television. His character arc was incredible, but when a show deals as heavily in the idea of identity — both in terms of the identities we craft for ourselves and the identities doled out to us — as GoT does, it's a bold choice to say that some people simply do not change. It's a cynical story, but it's also one that we see play out in our real lives.

Brienne’s final scene did speak to her love for Jaime.

Brienne's final appearance on the show saw her sitting down with the Book of Brothers, colloquially known as the White Book, to write down the great deeds that Jaime did in his life. We knew that it was important to Jaime for his entry to be longer than the single page that it had once been, and even after his betrayal, Brienne was able to give him that.

The entry in the White Book was a nice grace note to Jaime's story, but it came after so much damage was done to his character. It's like having the best-ever after-dinner mint after eating moldy rice or eating cereal with root beer instead of milk.

But like the Knights of the Vale, Game of Thrones composer, Ramin Djawadi, is riding in to make the last minute save.

After the Thrones finale, Ramin Djawadi sat down with Insider and discussed a number of GoT related things, including that final Brienne scene. And, it turns out, a theory that some fans once had was actually true...

The score opened with a familiar melody...

This is the scene from early in Thrones' second season wherein Robb Stark, then-King of the North, married Talisa Maegyr, a commoner from the Free City of Volantis. The music is what we're focused on here, but this scene is basically the beginning of the Red Wedding, so watch it with the appropriate tension/ horror.

Djawadi confirmed the fan theory that the music cue was intentional.

The music that played during Brienne's White Book scene opens with the same melody as "I Am Hers, She Is Mine," the song that played during the season two wedding. "I just threw that in there because I thought it would be a subtle nod to their relationship," said Djawadi. "When she sits there and she thinks about him and writes down all the things he had done, the second half is the 'Honor' theme, but yeah a big chunk of that [song] is the wedding theme." The fans who thought the wedding cue was intentional are officially vindicated!

Those fans must have had friends that thought they were insane.

"It's a coincidence!" I can just hear those friends saying. "The show didn't want Jaime and Brienne together! They wouldn't play an obscure song from six years ago to make you think about something that they didn't want to happen!" This Insider interview is a big ol' thumb in the eye to those hypothetical dismissive friends.

Djawadi used his music to bring up the idea of marriage.

"It's just a hint of what their relationship — if they had stayed together, if he was still alive — what it could have been," Djawadi went on to say. "That's why I put that in there." Lovely.

Guys, Brienne and Jaime got married! Kind of...

Great, now just by doing an interview, Ramin Djawadi has me all teary-eyed. As if the guy didn't do enough to make me cry with the music that he put over the show's closing montage...

Djawadi spoke about the power of music.

"There were no words spoken, but by putting that [music cue] in there, your imagination goes [into] where this could have gone. I wanted people to have that emotion, and have those thoughts. I'm glad it was picked up." He's not wrong — with no dialogue and no special effects, Ramin Djawadi made us feel something. He's a more of powerful wizard than Bran could ever be. Maybe he should be king...

And while this had to have gone over a lot of fans’ heads, some eagle-eared viewers saw what he was laying down.

It's one thing to put down a music cue that makes viewers well up. It's another thing entirely to lay down a secret that makes fans feel vindicated when you confirm it with Insider.

Does this revelation make Jaime’s arc any better?

The notion that, had Jaime survived, he would have found his way back to Brienne is lovely, but does it change the fact that he did die under a pile of rubble with his sister-lover?

Does this re-frame Jaime's ending as tragic, rather than stupid?

Jaime's last words to Brienne become important here — he said that he was returning to King's Landing to be with Cersei because "she's hateful. And so am I." This is a man so consumed by a narrative that he's told himself that he willingly gives up his true love.

Ultimately, Jaime was a man that couldn’t overcome his addiction.

Self-hatred can lead to addiction. If you feel awful about yourself, it's almost a form of medication to return to something, or someone, who makes you feel good — like, say, someone that you've literally been with since you were conceived — even if they're objectively bad for you.

Is that any sadder than losing him on the battlefield?

One of the central tensions of Game of Thrones has always been the question of what makes us who we are. Is it our birthright? Our titles? Our actions? Jaime dealt with the question of who he was — a good or bad man — through Brienne. She saw him as a good and noble knight, while he saw himself as a monster. Jaime lost that battle. Is that any different than any other character on this show who's died in battle?

But this music cue confirmation proves one thing — these characters had a vital connection.

When Brienne became Lord Commander of the Kingsguard at the end of the series, and the duty of writing in the White Book fell to her, she knew who deserved that ink.

And Jaime always wanted to prove that he was honorable...

In the end, Brienne did for Jaime something that he wasn’t able to do for himself.

By filling pages with his good works, Brienne exonerated Jamie in the eyes of the realm. Ultimately, being written about in the White Book was as important to Jaime as being knighted was to Brienne.

For my money, Jaime and Brienne were as good as married.

Whether or not they spoke their vows before the Seven, Jaime and Brienne did something for each other that no one else could — they made each other whole.