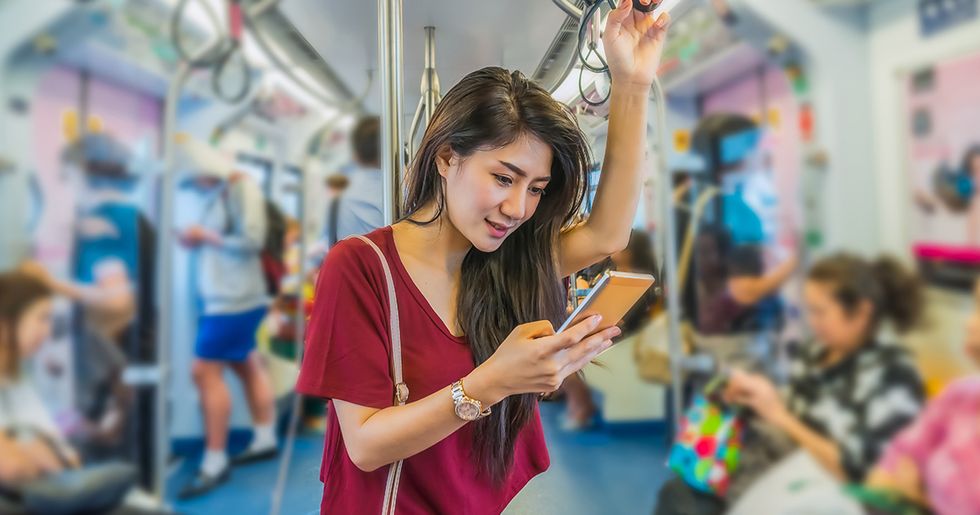 Public transportation is vital and important for many reasons.

One of those reasons is that everyone can travel on the subway. And when I say everyone, I mean it.

These are the weirdest things people have ever witnessed on the subway.

Now, this is something you don't see every day. Or maybe you do if you regularly commute with this iconic pair.

Yes, that is a man with a giant pet peacock. Notice how no one around him seems to care at all. That's how you know you're in New York.

Dog in a bag

In New York, dogs aren't allowed on the subway unless they're in a bag. This is a brilliant loophole.

I have so many questions, and chief among them is how he can see through those leaves? He's clearly looking at his phone!

There's an 11-year-old kid who sits in a subway station in New York and sells emotional advice. Which is honestly the best thing in the world and I would pay for it.

This woman is wearing a hat made out of bubble wrap, and I simultaneously want to steal it for myself and pop every bubble and destroy it.

What? It keeps her face warm.

This, my friends, is what we call quite a lewk. Is this like, a character from Pan's Labyrinth or something?

He's business on top, hairy on the bottom. This is like if Chewbacca got a job selling insurance.

No biggie, just a guy and his fox riding the subway. The lady next to him doesn't even notice.

Pink chicken sounds like a weird euphemism for something, but it isn't. It's just what's on the subway right now. Eating Cheerios.

I am a big fan of the "little legs on an animal to make it look like you're riding it" costumes. They're always hilarious.

This person has a whole gaming console set up on the train. The worst part is he only has to go three stops.

Judging by the pumpkin bucket under him, maybe this was Halloween? And thus not as weird?

That's a lot of soda cans that he had to drink to make that outfit. No matter how weird it is, it is impressive.

No matter what season it is, the subway is a hot yoga studio. This might seem ridiculous, but it's actually the most brilliant idea I've seen in a long time.

That is a man, on the subway, with a colony of bees. Let's hope it doesn't accidentally fall and break open!

This is the cutest photo ever. But the real miracle is how was there that much empty space on the train?

I doubt that this is how this guy hoped his night would end. Something went terribly wrong.

This is quite an outfit. It looks like something an alien would wear if they were trying to look human but clearly didn't know how real people dressed.

That is a majestic taxidermied weasel (I think? I'm not an animal expert.) And honestly, that's probably not even the weirdest thing those people had seen on the subway that week.

These aren't some like, cute shoes with cute little fishies on them. This is like...weird.

Well, that's one way to get a whole section of the subway to yourself. That's a lot of bottles.

Look, when you come across a genius, don't make fun of them. Bow down to them.

Is it weird if I tap him on the shoulder and ask him where he got his lacy undies? They're cute!

Is that a squirrel? In a top hat? And a bow tie? Holding an iPad? OK, just making sure.

What? He's just stretching. Gotta get a workout in when you can.

This is weird, but it's made a million times weirder by his posture. He's sitting up so straight. Like, weirdly straight.

Sure, he might be dead, but he's still a person. That's one subway fare, please.

It's a giant leaf hat! What questions could you possibly have?

Turtle on a leash

Quick, put that turtle on a leash before it runs away! *world's longest eye roll*

Duck on a train

Was the duck...alone? Because I love ducks, and this is a cute one, and I need another pet.

Bananas on a leash

Forget the turtle on a leash. Bananas are the most absurd thing you can put on a leash.

When you're stuck on the train, and you have a meeting planned, you're gonna have your meeting. This is just resourcefulness.

I am confused and scared about this! Is it a doll? Is it a real baby in a mask? I can't decide what's more disturbing!

You know, my mom always warned me that if I watched too much television, I would turn into one, but I never believed her...until now.

Wow. If Santa looked like that, I would believe in him.

Pissing in the subway station

Ohhhhhh, so that's why subway stations always smell like pee. I get it now.

I found him, guys. The coolest man alive. Share this with your friend who always sends you weird pics of stuff on the subway!