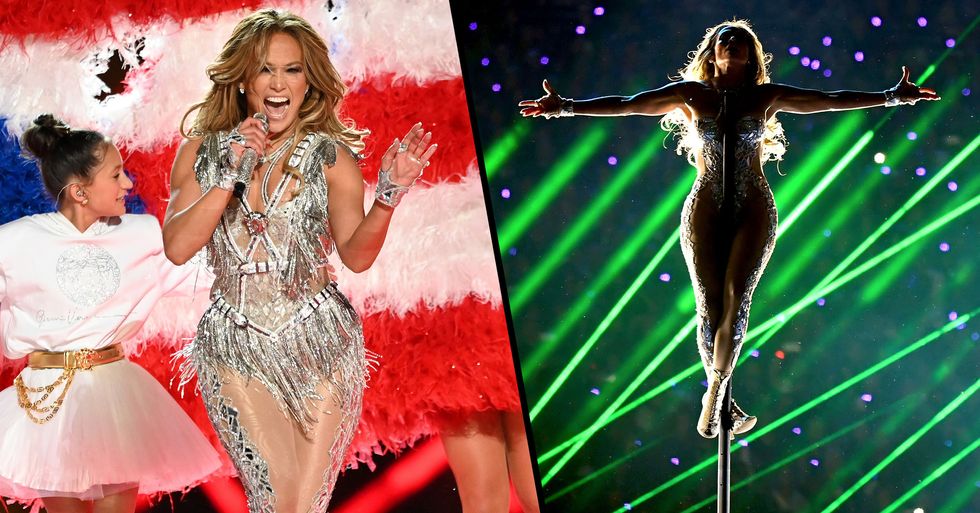 The biggest night in the sporting calendar took place on Sunday night. The Kansas City Chiefs took on the Francisco 49ers in the 54th annual Super Bowl at Hard Rock Stadium in Miami Gardens, Fla and spoiler alert: The Chiefs took home the title.

But other than the football, it seems as if something else stole the show. Sunday's long-awaited half-time show performance has got everyone talking. And now the creative director has revealed some secret hidden meanings behind the incredible performance.

The Super Bowl finally hit our screens on Sunday.

The likes of Lady Gaga, Beyonce, and Prince have performed the lucrative gig.

This was a personal favorite.

Hey, we know what we watched the Super Bowl for!

We're so impressed with the athleticism displayed by these 2.

But even more impressive than the routine?

Well, it has to be all the behind the scenes secrets about its hidden meanings!

And creative directors Tabitha and Napoleon Dumo have now revealed all.

Tabitha claims they approached the show with one question. "What is it that we’re going to say? What is that we can do to just leave an impact?"

"This is the biggest stage in the world."

"I think every little girl looks at the Super Bowl their whole life and dreams of touching that stage and performing, so we wanted it to really count and mean something."

"Inspiring women of the next generation to get loud!"

"The halftime show was also a no-nonsense affirmation of Latin pride and cultural diversity in a political climate where immigrants and American Latinos have been widely demonized," wrote the Times review.

And as for that song choice?

"I think it started, from a musical standpoint, having ‘Born in the USA’ in there for a little moment and it just was a natural evolution."

"Let's just do this in a way that everyone feels that American pride."

"It was more or less about love."

"It really comes from a base of love and happiness to be a Latino in America."

The kids in cages were also a strong message.

Many thought there must be a political basis to the imagery - though both Lopez and the creative directors declined to comment on this.

"I think it’s symbolic to ... You can put yourself in your own cage metaphorically as well if you don’t believe that you can be bigger or greater than something and if someone doesn’t allow you to believe that about yourself."

"Someone can put you in cages or you can put yourself in cages so it’s a bigger statement to everyone to see your own potential and not feel limited in this life that we have that’s so special here in this country."

J-Lo seemed to support this message.

"All I want my girls, the little girls on stage with me and all over the world to know is how to use their voices and be proud of everything they are," she wrote on Instagram. "Other people can try to build walls, keep us out or put us in cages. We are proud to recognize that all of us together are what makes this beautiful country truly great."

And as for all that pole dancing?

"Jennifer over the [Hustlers filming] process learned, ‘Wow, this is like a sport. You have to be an athlete and in such great shape to really do what this is,'" explained Dumo.

"But it’s evolved into such an art form."

"There was no grinding. Break the stereotype!"

Some suspected the defiant pole dancing was a revenge plot against the Oscars - but apparently this wasn't so.

"We wouldn’t change our course because things didn’t work out favorably to her," debunked Dumo.

"It was a choice we made and one we’re proud of."

"Everybody will see things as they see it through their filter, but our filter was honestly just celebrating an artistic version of what gave her such an amazing opportunity in her film career."

So what was the message the Dumos intended?

"Let’s remember this country was built and founded off of multicultural people. We’re all immigrants coming from somewhere that made this country. We show each other love and respect and we will come out on top. Really that’s the message," claimed Tabitha.

"For me, it’s even simpler than that and a little less political," said Napoleon.

"It’s that two women can come to a very strong men’s event and get a standing ovation in an audience that’s there to see a football game."

"I witnessed it myself."

"Every guy stood up and put their hands up like there was a touchdown. It goes to show that entertainment at the Super Bowl can come in many forms." The half time show wasn't the only part of the Super Bowl to capture the internet's attention, though. Scroll on for the very controversial Jason Momoa commercial ...