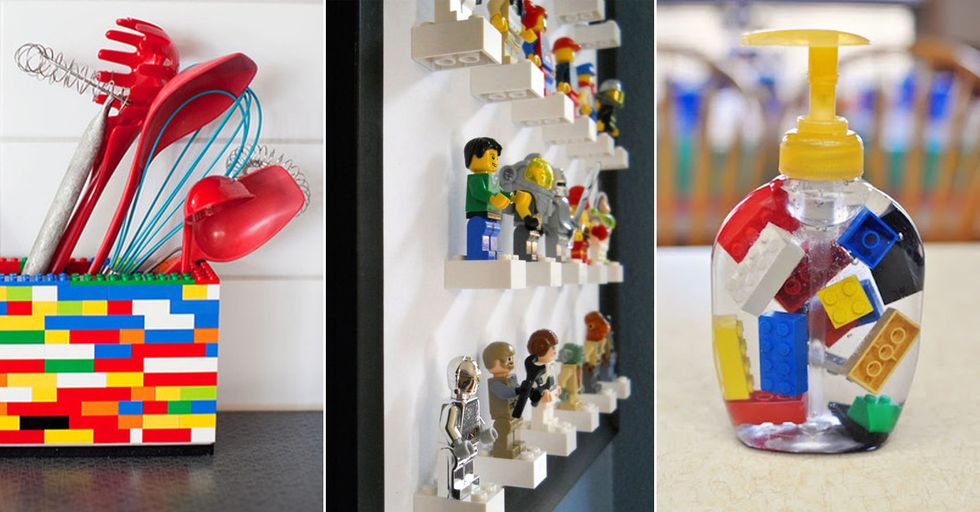 Creative and Practical Ways To Use LEGO Around the House (Without Stepping On Any!)

For the last several decades, LEGO has been a standard toy staple found in pretty much every home that has kids (or nostalgic adults) in it. They were first created by a Danish carpenter named Ole Kirk Christiansen in 1934; since then, over 400 billion of the familiar plastic bricks have been made.

Aaaand I'm pretty sure most of them are in my carpet, judging by how often I step on one.

Rather than risk unleashing the stream of obscenities (and intense pain in the arch of your foot) caused by errant LEGOs lying around, put the loose blocks to good use with one of these cool, practical projects! Hey, I bet your kids would even help; they love doing anything that involves building with their favorite bitty bricks (as long as they don't have to put them away, because we all know that ain't happening).

via: House of Hepworths

All it takes are some plain magnets and a hot glue gun to turn the toys into fridge magnets. If you're not a fan of decorating in primary colors, just spray paint the blocks first. You could also turn minifigures or small LEGO creations, like little planes or lady bugs, into magnets the same way.

Face it, those flat pieces are nearly impossible to get apart anyway. You might as well go with it! This set even includes a handy coaster caddy, making it both functional and organized!

Speaking of organized, when was the last time you lost your keys? It only has to happen once before you start wishing you had a sweet key keeper like this by your door. Just drill a hole in a flat block so it can loop onto your keychain, then stick it to the decorative plate when you get home!

Here's another option that's a little bit simpler; bonus points for having a couple of minifigures ready to grab on your way out the door to keep the kiddos occupied. Note, this probably isn't the best solution for those of us whose keys weigh 400 pounds because we have all kinds of grocery cards and trinkets and garage keys from three houses ago jammed on there. For that, I need something more like a LEGO wheelbarrow. But I digress.

This ring project is such a great way to use up all those little LEGO bits — and get them out of the house, too, as the tutorial says they used these as Valentine's Day classroom gifts! They'd also be fun party favors. You'll need some inexpensive ring blanks, and after that the sky's the limit!

Okay, so this particular frame already sold, but the picture shows what kinds of cool, creative stuff you can add once you glue some base blocks to a boring old store-bought frame.

This one's a little less artsy and more geometric, but we loved the added detail of a little figure and bunch of flowers peeking up over the photo.

Yes, I know this one looks pretty advanced, but the creator provided plenty of pics so I'm confident you can figure it out. If not, it can serve as inspiration for a phone holder of your own design!

If you're up for another challenge, this Battleship game is a pretty amazing way to turn your toys into...other toys.

This is like a throwback to the old BFF necklaces of the late '80s, but without the cheap faux-brass tarnish or the arguments with your bestie over who gets the "Be Fri" half and who gets the crappy "st ends" half.

In a classic video game themed aquarium, you'll have the geekiest fish on the block! Just don't feed them mushrooms or you'll have to get a bigger tank.

While such a large project might seem daunting at first, there are really great instructions for putting this table together. I like the intersecting stripes, but you could really customize this with your own design, a monogram, or just use the random 7,176 multi-color bricks that are probably in your living room carpet right now.

Create a LEGO lantern by building a simple box with clear or semi-transparent blocks. Add an LED light and you're done!

If you thought that last one was a bright idea, you'll love this floor lamp!

As much as you don't want these lodged unexpectedly in your instep as you walk across a room, you have to admit they are pretty cute. Appreciate them to the fullest by keeping them safely at eye level in a framed display.

So simple, but so cute. If we had enough bathrooms to be one of those houses that has a "kids' bathroom," this would be totally perfect there. As it is, my kids will probably talk me into making one for the kitchen. Because obviously we need one somewhere.

For the tech-savvy, the Bit Planner is pretty amazing. It's a visually beautiful wall-mounted planner, but if you take a pic of it with your phone it automatically syncs to an online, digital calendar. We live in the future, people.

Cool Clock Made of Interlocked Blocks

Sorry, couldn't resist all those rhymes... Anyway, you can recreate this clock with a large plate piece and a clock kit. Swap out the square blocks if you want, and mark the hours with fun minifigures instead!

You could potentially build a letter from LEGO alone, but this version just requires you to glue bricks to a painted wooden letter, which you can get from a craft store.

This stair-stack design means you can make a bowl any size you need. And if you enlist your kids to help, they might even be motivated to eat the fruit you put in it! Hey, it could happen.

A coordinating design from the same builder, who says this is patterned loosely after the Brooklyn Bridge, gets your kitchen even more LEGO-ed out.

But don't stop there! Keep tricking out your kitchen with this simple LEGO box to add some color and keep your ladles from jamming the kitchen drawers shut.

Maybe you'd feel safer keeping the Lego confined to a shelf, and if so, we have you covered. These bookends are so charming; did you notice they included faux LEGO books on each end for added stability?

This guy made custom cufflinks to wear at his wedding. I bet they even matched the wedding colors! My favorite part, though, was the commenter who suggested the bride should have worn a LEGO bracelet so they could be snapped together at the altar — pure romantic, geeky brilliance.

As a treat for your little rodent friends, build a tiny house for that special hamster, gerbil, or rat in your life (at least I'm assuming that rat is in there on purpose and didn't just sneak into some poor kid's LEGO dollhouse).

via: Stepping On Bricks

A calendar like this is the perfect accessory to perk up a dull desk. Plus, you'd have an excuse to play once a month at work! "Sorry boss, it's the first of the month, so I need to finish rebuilding my calendar before I can get started on that TPS report, mmmkay?"

via: A Typical English Home

If you really want to enjoy LEGO-ing to work (see what I did there?), make yourself this cool desk organizer to stash your pens and other office junk. It even comes with a quiet little coworker, who's probably the only one you can trust not to steal your lunch out of the break room.

A couple loose bricks, a Sharpie or two, and some dirt, and you have cute potted homes for your teeny succulent plants. Where I will still forget to water them and they'll die within a week, but they'll look cute on my windowsill until then!

If you have LEGO and a drill, you're just a few minutes away from your light switch cover plate getting a LEGO-themed makeover.

If you think a LEGO safe wouldn't be, well, safe enough to keep your valuables in, consider this: A standard LEGO brick can withstand 950 pounds of pressure. That's pretty tough. Which sort of explains why they hurt so much to step on! (Have I mentioned that I step on a lot of LEGO around here?)

Not only is this idea cute and clever, but I bet it's heavy and cumbersome enough that my kids would stop wandering off with the tissue boxes. I might be able to actually find a tissue when I need one? Imagine that! And even if they do drag this off to another room, those colors are going to be hard to miss. Assuming they don't leave it in the LEGO bin...

For the ultimate in LEGOdecorations, you can turn an entire wall of your home into a vertical, ever changing 3-D mural of Lego building awesomeness. And, I might have mentioned this once or twice before, but anything that gets those things off the floor is a win in my book.