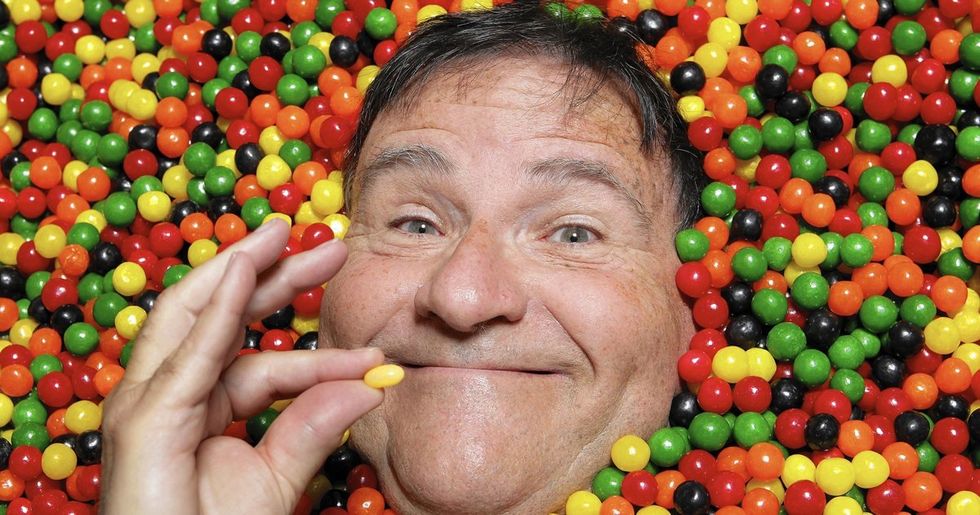 Weed is kinda legal now! At least in like, the cool states. Shoutout to California, Oregon, Nevada, Washington, Colorado, Alaska, Michigan, DC, Vermont, Massachusetts, and Maine. And now that you know which states you need to drive to in order to purchase the good stuff, we're here to tell you about a game-changing new product that's going to make getting high a little too easy.

And I mean easier than the time I was running late for work, super hungry, and almost snacked on my roommate's gummy worms only to quickly realize they were edibles before any damage could be done. This is a true story.

As the popularity of legal weed increases, so too does the popularity of people wanting a slice of another kind of green. Marijuana is now a major market, whether you like it or not, and popular brands and inventors are starting to take notice.

Everyone knows the Jelly Belly.

That slightly fruity, slightly squishy candy that gets stuck in your teeth in the most delightful way.

Heck, I even toured the Jelly Belly factory as a kid.

And let me tell you. Not worth it. You just walk through a factory and watch a bunch of people miserably emptying sugar into giant stainless steel vats.

But the guy who invented the Jelly Belly is starting a new business.

And this time, keep those Jelly Beans away from the candy bowl at grandma's house.

Or, you know, don't. Maybe that'll be kinda funny.

Okay no seriously we could end up with dead grandparents and no one wants to lose their grandparent because they got too high on Jelly Bellys. Jelly Bellies? Who cares.

The business is called Spectrum Confections.

And they plan on offering a whole host of different kinds of candies. Like some kind of... confection spectrum.

Their first product is a jelly bean infused with cannabidiol or CBD.

Weed jelly beans are coming, and hipsters are pumped.

But before you get too excited, there won't be any THC in the gummies.

So you're not gonna get high from a handful of jelly beans -- yet.

But CBD does have a number of benefits.

I keep trying to tell my mom this, but she just thinks I'm a stoner now. Mom, I know you're reading this -- I'm not a stoner I promise.

According to Harvard (which we trust implicitly), CBD has been known to help people suffering from high anxiety and even insomnia.

So now if you're trying to have a night out or having trouble getting to bed, just pop a few jelly beans and you're good to go. Although hopefully if you're going out, it doesn't make you fall asleep at the bar.

Jelly Belly is not actually involved.

Like, the brand. But I'm guessing the guy who invented Jelly Belly knows a pretty decent recipe, so I'm not too worried.

The candy is launching with 38 flavors.

They're really playing the hits with flavors like roasted marshmallow, piña colada, and strawberry cheesecake.

Which is a pretty common edible dosage.

Just one bean for a whole dose?

That's... kinda disappointing. You know some sad newbie is going to eat a handful of these and have a real weird afternoon.

"Did you know that Bertie Bott's Every Flavour Beans were actually used by wizards as an intense hallucinogen and aphrodisiac? Grindelwald and Dumbledore used to have an entire bag before turning in for the night." NO JK. I DIDN'T NEED THAT.

“The jelly bean is perfect for the proper dosage. We are putting 10 ml in each [bean]. If people want a small dose, they eat one. If they want 20 ml, they can eat two," and so on. “They can decide what their proper dosage is." Yes, David. That is how math works.

Are we taking bets on how high David was for this interview?

He goes on to say, "our mango tastes more like mango than mango does." Okay, it's confirmed.

The Jelly Beans are only found on the Spectrum Confections website.

But unfortunately, at time of publication, they're all sold out. So we couldn't test them to tell you how they... perform.

CBD is an ever-expanding market.

In fact, it's already a $1-$2 billion market and analysts estimate that it could become a $16 billion dollar market by 2025.

So it's no surprise that businesspeople are jumping on the trend.

Jelly beans are only the newest invention of a long list of cannabis-related products.

In fact the inventor of the popular beer, Blue Moon just announced his new marijuana-infused beer.

Which doesn't really sound like my cup of tea, but hey, we're not gonna judge if that sounds good to you.

The new Ceria Brewing Company is making beer with no alcohol content.

Federal law prohibits a combination weed-alcohol product, because obviously, so this "beer" is actually alcohol-free.

The beer is initially only available in Colorado.

It launched this past fall in inventor Keith Villa's home state.

The first "beer" is a Belgian style white ale.

Similar, in fact, to Blue Moon. Seems like he found his comfort zone.

The company plans to launch two new beers this year.

An American Lager and an IPA. So no matter your preference, you and your friends can get high on this not-beer.

The beer is specifically brewed to get you high at the same rate that a normal beer would get you drunk.

Their white ale contains 5mg THC, while their lager has only 2.5mg and their IPA has 10mg. It seems like their scaling their dosages proportionately to the alcohol content in these beers.

As most states legalize the drug, more traditional manufacturers will likely get involved in production.

You're kidding yourself if you don't think the big alcohol companies will jump on board in fears that marijuana sales will cut into their profits.

Weed doesn't seem to be just a trend.

In fact, more and more states are legalizing it every time it's on the ballot.

Edibles have become a super easy way to get into the drug.

They take away the learning curve that comes with griding and rolling. People just have to start with a small dose and work their way up.

So we're curious how you feel.

A lot of people are opposed to new laws allowing the sale of THC and CBD based products.

Do you think we need to scale back?

Or is it finally time to decriminalize marijuana? We want to know! Tell us how you feel in the comments.