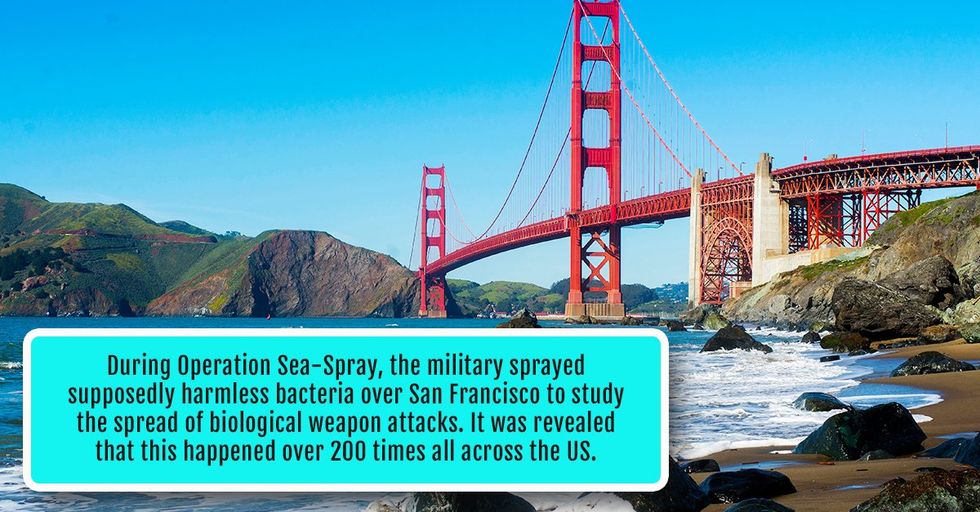 18 Creepy Declassified Documents That Give Us the Heebie Jeebies

There are plenty of secrets kept by the government without getting into conspiracy theorist territory, and sometimes those secret actions become declassified.

Reddit-users recently went over some of the creepiest declassified incidents throughout the world, from a sinister Soviet-era island to a United States nuclear gaffe that almost ended in catastrophe.

Check out 18 of the craziest declassified episodes in history!

Project 1794 was a top secret program with the U.S. Air Force working with a Canadian aeronautics company to build a supersonic flying saucer-like aircraft that would be able to simultaneously wage psychological war on our Cold War enemies as well as physical war (it was also designed to be a bomber). The project was scrapped when they figured out that not only would it be too expensive to build enormous flying discs, but also that crafts of that shape were near impossible to fly at supersonic speed. -VictorBlimpmuscle

During Operation Sea-Spray, the military sprayed supposedly harmless bacteria over San Francisco to study the spread of biological weapon attacks. It was revealed that this happened over 200 times all across the US. -Paranoidas

A similar test was run in New York City subway system by dropping lightbulbs filled with bacteria onto Manhattan train tracks. An army report in 1968 concluded that “similar covert attacks with a pathogenic disease-causing agent during peak traffic periods could be expected to expose large numbers of people to infection and subsequent illness or death."

Not exactly creepy, but during Operation PBSUCCESS, the CIA backed the 1954 coup d’etat in Guatemala at the behest of the United Fruit Company and US State Department. Basically a socialist friendly government was elected in Guatemala and started land reforms to give people an opportunity to better their lives by dividing up large portions of estates and plantations owned by the United Fruit Company. The CEO and board of directors approached the US State Department and asked them to put pressure/intervene to stop these reforms from continuing. Eventually, because some members of the Guatemalan government were friendly with the Soviets, the President authorized operations by the CIA to remove its elected government. The CIA backed a right wing faction and spoofed a full on military attack. -broccolistinks

Sweden had a compulsory sterilization program running from 1935-1979. It was state-sanctioned and given without consent, sometimes without the people knowing they were being sterilized. The three main reasons for these sterilizations were: 1) Health concerns for the mother. 2) Eugenic (not wanting to pass on mental illnesses or any form of handicap). 3) Social (antisocial people, criminals, drunks etc). In other words anyone who didn’t conform properly and was considered unfit to raise children. -Sugary_skull This next one makes it look like the Pentagon has some serious secrets...

The truth is out there...

Jeffrey Dahmer's full confession - a couple of hundred pages of pure madness. Necrophilia, dismemberment, skinning, lobotomy, body part preservation, cannibalism... Dahmer became pretty close to his interrogating detectives (Dennis Murphy and Patrick Kennedy), and provided a lot of detail to them. A lot of it in a pretty candid, off hand manner. -Miss_Musket

Nixon had a second speech prepared in case a failure on the 1969 moon landing left Neil Armstrong and Edwin “Buzz" Aldrin marooned with no hope of rescue.

Operation Northwoods nearly saw the US harm its own citizens.

Basically, the U.S. government was going to carry out attacks its own people (as well as other military targets) and blame it on the Cuban government, so that the U.S. would have a "justified" reason for going to war with Cuba. The plan involved blowing up U.S. ships and even inciting acts of terrorism on the streets of America, killing civilians. It was backed by the DoD and Joint Chiefs of Staff. Thankfully, John Kennedy vetoed the idea. According to Adam Walinsky, JFK's speechwriter and friend at the time, JFK left the meeting and said, "And we call ourselves the human race." - Boat_on_the_Bottle

In the 1940-50's the US government gave doses of radiation to newborns and pregnant women in an attempt to study the effects radiation had on newborns and pregnant woman. In one study, researchers gave pregnant women doses of iodine-131. When they inevitably miscarried, they studied the women's aborted embryos in an attempt to discover at what stage, and to what extent, radioactive iodine crosses the placental barrier. -FreeThe_Truth But did you know North Carolina was almost blown up twice? In the same accident? Read on to find out how...

The 1961 Goldsboro B-52 crash involved an aircraft breaking up midair, and dropping two 3-4 megaton nuclear bombs (much bigger than those dropped on Hiroshima, for reference) near Goldsboro, North Carolina. A report declassified in 2013 reveals that one bomb came very close to detonating—essentially, a one safety switch was all that stood between the US and a devastating explosion.

In the 1940s a Swedish group of scientist gave mentally ill patients candy to see the effects it would have on their teeth. What makes it especially bad is that these experiments were performed on people who were "uneducable" who had no say in what went on and needless to say their teeth were beyond repair. -FreeThe_Truth

In the 1930s, the Soviet government decided to send thousands of "undesirables" to a swampy river island called Nazino with nothing to survive on but bags of flour. People tried mixing the flour with river water and this resulted in outbreaks of dysentery. Eventually people started eating corpses and later on killing other people for food. There was no leaving the island, since the guards would shoot you if you tried. Eventually the settlement was dissolved and the 2800+ survivors were sent to smaller settlements upstream. All of this was kept secret by the government until 1988 when the glasnost policy was introduced and the details were made public.-DemotivatedTurtle

After the My Lai massacre during the Vietnam war (killing of around 400-500 innocent civilians in Vietnam after an army troop killed an entire village), the U.S. government established a group to investigate other war crimes like this occurring in Vietnam. They found 7 massacres of equal or greater magnitude than My Lai and 203 reported war crimes that the public was unaware of—thousands of innocent people killed by U.S soldiers. The information has since been reclassified, but there were several journal articles on it when it was first released. -TripleJericho

The U.S. Public Health Service conducted a study between 1932 and 1972, observing the untreated progression of syphilis in Alabaman African-American men under the guise of receiving free health care from the United States government. None of the men infected were ever told that they had the disease, and none were treated, even though penicillin was proven to successfully treat syphilis. Instead, the men were told that they were being treated for ‘bad blood.’ This next one will make your blood boil...

Unit 371 committed horrific war crimes—and got away with it.

A covert research and development unit of the Japanese army, Unit 371, committed a vast number of lethal experimentations on people during World War II.

Over 3,000 people were experimented on, and instead of being tried for war crimes, the U.S. gave Unit 371’s researchers immunity in exchange for the data they gathered.

Operation LAC: from 1957-1958, the U.S. Army sprayed zinc cadmium sulfide in primarily African-American areas of St. Louis to test the dispersion and geographic range of bio or chemical attacks. The Pentagon maintains to this day that no one got ill from it, but residents and leaders of St. Louis speak differently. This only got widespread exposure after Missouri's two senators demanded the declassification of the project about 10 years ago. -AulayanD

The gist is that three newly-graduated physics PhDs with no weapons experience, only two of whom were working at a given time, were tasked to design a nuclear weapon in the 1960s. They didn’t have access to classified materials (that is, no existing nuclear weapons designs or weapon-focused supporting materials), and only basic computational support.
It took about two and a half years of part-time work to come up with a workable design of the more challenging "fat man" type. Understandably, the final design and a whole lot of details remain redacted from the public version. The takeaway: difficulty of design is not the limiting factor in a country developing a nuclear arsenal. Not by a long shot. It's so easy, a couple new physicists could do it in a couple years back before modern computational methods. -bigscience87 Have any history buffs in your life? Share this with them on Facebook!