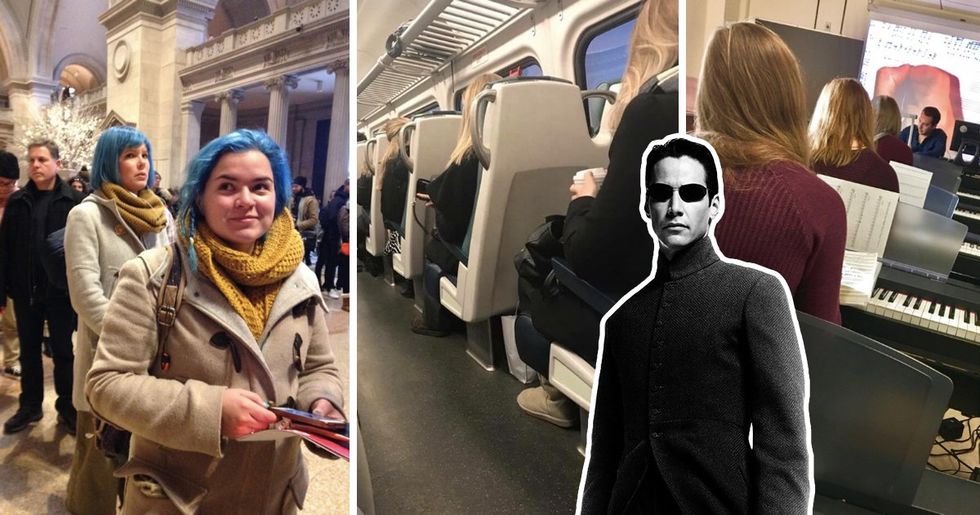 Some people call them doppelgängers.

Others think there's something more ominous at hand.

Remember that moment in The Matrix where Keanu Reeves sees the black cat walking by?

And then a second later, he sees another black cat walking by in exactly the same way? That, my friends, is what we call a glitch in the matrix. A freaky identical occurrence at or around the same moment. These people just happened to catch these glitches on camera.

I know this looks insane, but this is actually a pretty normal afternoon for the Ladies Who Lunch While Wearing Gray Sweaters and Black Shirts Club. It's right there in the name.

That's four blonde women in black coats in a row. Either there's a glitch in the matrix or a sorority just got back from a snowboarding trip.

Now, this is freaky. These two women don't know each other! They both just chose a yellow scarf and a tan coat to go with their matching bright blue hair.

This almost looks like the same woman at three different stages of life. And let's not forget that the person sitting across from her in all three booths is wearing red! The next one is truly unnerving.

Lunch at the museum

This woman snapped a photo of her boyfriend and his doppelgänger at a museum. But this makes total sense. That's obviously the outfit a white guy should wear to a museum.

This guy traveled on vacation to Thailand and found himself on a random tour with a guy who looks exactly like him. Come on now.

Oh, you think glitches in the matrix can't happen with dogs? Well, these two brindle pitties with purple collars beg to differ.

This person saw her twin right behind at a Coldplay concert, which is incredible considering that looks like a huge venue. That's clearly not a coincidence. That's a glitch. The next one takes the twin thing to the next level.

Asleep on the train

Not only are these three identical people asleep, but they're asleep in exactly the same way, facing the same way. No, this isn't a still from a movie. This is real life.

I would venture to say almost every young woman I know has an outfit that looks exactly like this, so this one isn't that strange to me.

Sure, this could be a glitch in the matrix, but it could also just be the uniform for every young guy who works in a corporate office and commutes to work.

A tech conference is possibly the most obvious and least expected place to run into your doppelgänger. But here we are.

Kids riding bikes has become the universal ominous sign in movies and TV that something terrible is about to happen, and this is just too much. I'm totally spooked. The next one is just kind of funny.

Friends 'til the end

These two friends showed up at the same party in the same outfit, from the shirt to the shoes. I just really hope they bought those shirts together because that's pretty specific.

What? Everyone knows that a pink shirt and tan capris is the universal doughnut buying uniform for moms across Canada.

It's bad when you see someone wearing the same dress as you, but to be stuck behind them in the street, walking in the same direction, carrying shopping bags? That's a little over the top.

Waiting for the subway

This is insane. Maybe they came from the same job? Where they have to wear that outfit? And where they were gifted the exact same backpack? Ugh, this is too much.

Strangers on the street

These guys don't know each other, but they must shop in the same stores because that is one specific shirt. The next one is too close for comfort.

No seriously, these guys are wearing the same exact pants and shoes and everything. And they seem to know each other. They must be part of the same magic act or something.

I wonder if the cashier had a tough time when the second guy ordered. "Weren't you just here? I could have sworn..."

Ah yes, jean jacket, white shirt, black jeans. The uniform for every hip guy who wants to seem that much hipper while they're shopping for local produce at the farmers market.

If you look exactly like the guy on the box for the gravy pot, embrace it. Maybe you'll get yourself some free gravy pots.

You've got to wonder if they're reading the same story. Wouldn't it be really freaky if they both flipped the page at the same time? The next one doesn't involve people, but it will mess with your head nevertheless.

This person swears that she only owns two pairs of these shoes. Where did the other shoe come from?!?!?!!

A Couple of strangers

Three of a kind

My only explanation for this photo is that it's a very very small town and there's only one store to shop in. Otherwise, how?

That's three, count them, three white guys in black polo shirts with white stripes. Maybe branch out a little with the wardrobe, my dudes?

These guys met at the gym. I hope they become best friends and go on all types of adventures together. Share this with someone who needs to get their mind blown!