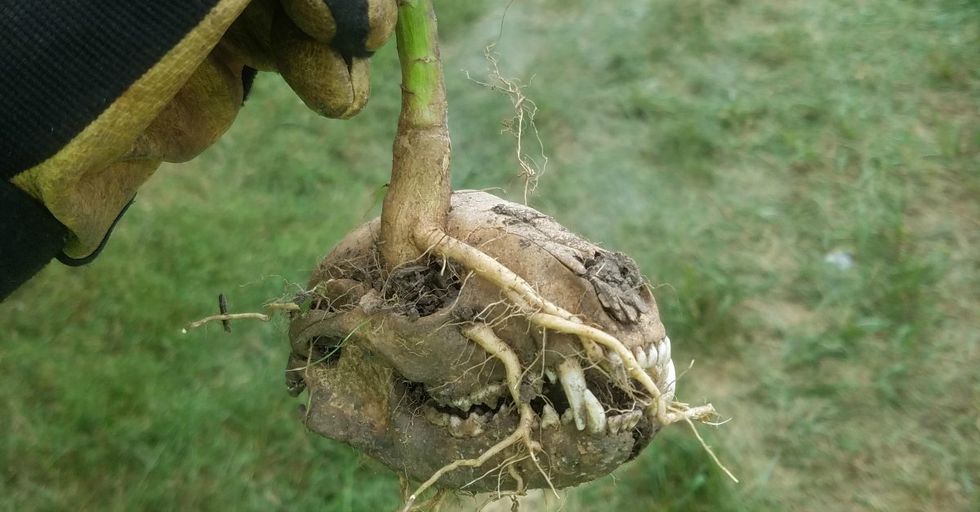 The Creepiest Nature Pics Ever Taken

Nature is beautiful. Nature is wondrous.

Nature is full of scary stuff that will scare the hell out of you.

These 29 pictures are guaranteed to make you say:

You might not want to step outside for a while after taking a gander at these photos of nature being so incredibly metal and badass and creepy.

LOL the inside of a lamprey's mouth is so horrifying that I will be haunted by this image forever. Goodnight!

If I told you this was a man-eating plant who'd just gorged himself on the innards of a grown human man, you'd believe me. But it's not. It's just a super gnarly fungus.

I know it's bad to anthropomorphize objects without faces, but that tree is clearly in pain and we have to do something to help it.

Australia is home to many of nature's basest horrors, one of them being the wrap-around spider that can flatten itself around a branch so you don't know it's there until you're dead. The next one takes us deep under the sea.

You are what you eat

This clearly evil fish died trying to swallow another fish that was four times its size. Talk about your eyes being too big for your stomach.

At least spiders are good for keeping out the smaller, annoying bugs and also leaving them dangling in its web as a morbid warning to all other bugs.

This looks like a creature out of a sci-fi movie, but it's not. It's real. And it's big. And it's coming to get you while you sleep.

If I saw that coming at me in the water, I'd just give up. I would just accept death and let it happen.

Where is this? Remind me never to go there. The next one might be a surprise.

Yes, that is what the inside of a goose's mouth looks like. Those are mean, terrifying creatures and I can't believe we co-exist with them.

The frog's like, "What? Leave me alone. What, do I have something on my face?"

These fish have big ol' human teeth and while they're primarily herbivores, they've been known to chomp off a set of testicles there and there.

OK, this isn't actually a zombie deer, but it is a deer covered with cutaneous fibromas, which are common, harmless tumors that appear on white-tailed deer.

That right there is the skeleton of a blowfish. Rad. The next one is gothic and sad.

That plant had no mercy and built itself right into the skull of that poor, dead animal. Nature is effing scary.

Contrary to popular belief, these are not human fingers that a serial killer planted in the ground as evidence for the cops. This is simply an otherworldly fungus.

These aren't the skulls of tiny dead animals. These are simply the seed pods of snapdragons. They just look horrifying!

This is a snake covered in ticks. It's so incredibly gross that I can't think of anything else to say about it.

Sure, it might just be seaweed in the water, but I'm still not convinced it won't eat me. The next one is a natural mutation at its finest.

This frog's eyes are inside its mouth! No word on how it eats, but I imagine the answer is "very carefully."

Turns out there's a certain angle at which an adorable penguin looks like an alien killing machine. Who knew?!

Look at this tree, growing all around and hiding this sneaky statue. It looks like it knows all my secrets and I don't like it.

This is what happened to this moose after it was struck by lightning! Isn't that amazing slash super disgusting?!

This coyote got caught in the cold and died frozen in place. The next one brings us back to those creepy plants.

These plants look like tiny baby hands reaching up out of the ground, and I am not about it.

This is what happened to this person's toilet after a recent flood. Hey, at least she's providing shelter to a lot of displaced animals.

This little frog was all shriveled and dried up on the sidewalk. Someone said, "Try splashing water on it," and it worked. That little zombie frog came back to life.

Something in your eye

While this person was walking home, he got something in his eye. Well, I guess that's the end of walking with my eyes open for me.

This isn't red clay. This is millions of fire ants creating floating islands during a flood. No thank you. Share this with someone you want to spook the pants off of!