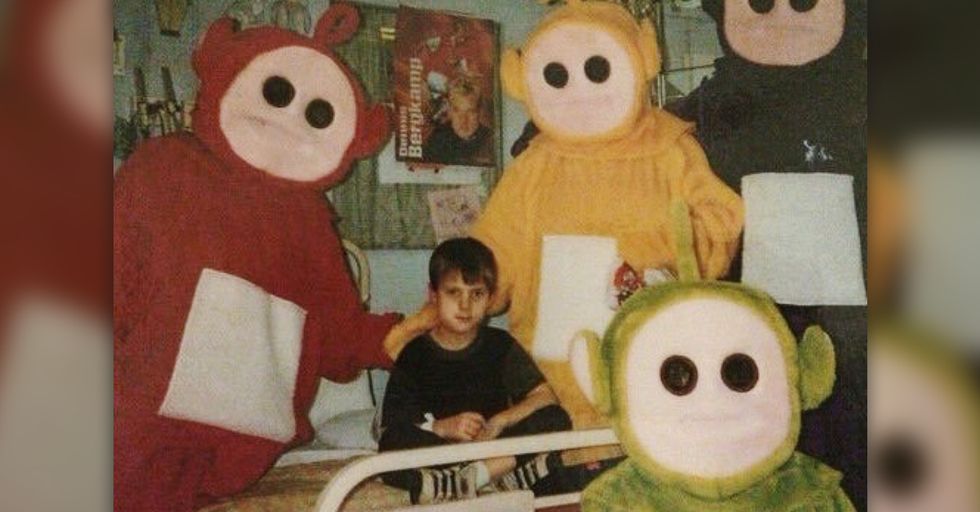 At their best, hospitals are amazing institutions filled with doctors, nurses, and other specialists whose primary focus is to help every single person they meet become healthier.

At their worst, though, hospitals are the stuff of nightmares.

Unfortunately for you, these pictures capture the darker side of hospitals.

Go ahead and take a guess at what's going here. Whatever you guessed, it's most likely incorrect.
Apparently, this is a picture of nurses testing gas masks that were made specifically for babies. That's cool. You weren't planning on sleeping tonight, right?

OK, how about this picture? Can you guess what's going on?
This picture was taken in 1928 at the Cheyne hospital in London. Due to the lack of sunlight in the facility, children like the one pictured here were given sunlight therapy.

Well, there's an image I never needed to see in my whole life. And we're only getting started...

Here's a photo taken at the Pilgrim State Hospital (later renamed the Pilgrim Psychiatric Center. The patient in this image is receiving what was known as hydrotherapy (also called "continuous baths").
This method required patients to keep their bodies submerged in water for hours or even days. They were strapped in and not allowed to leave for any reason during the treatment.

Well, this is horrifying. I don't really need to explain why, do I?

Apparently, the hospitals of yesteryear didn't get the memo that clowns are actually kind of terrifying and probably don't belong in hospitals with children.
Unless they were maybe trying to traumatize the children. (Honestly, worse things have been done in the name of "healthcare.") Surely they learned their lesson eventually though, right? Well...

Nope. Doesn't seem like they did, actually. Why are their eyes so dead and lifeless?!

OK, this one actually isn't too too creepy. Apparently, these ducklings were brought in to cheer up the little girl receiving treatment. Nonetheless, the image is still slightly unsettling.

Toys break everywhere and in all kinds of situations. Still, though, there's an added level of creepiness when that broken toy is found in an abandoned hospital.

Nothing to creep you out even further than a tangled snarl of metal set inside an already very creepy abandoned hospital room.

Is it just me, or did the color teal suddenly become 100 percent more horrifying? This photo was taken in the Beelitz Hospital in Germany. Apparently, Hitler himself received treatment at this very hospital at one point.

This photo may not seem creepy at first, but consider this: That's an abandoned hospital. All of the rooms are empty...except one. Kinda spooky, right?