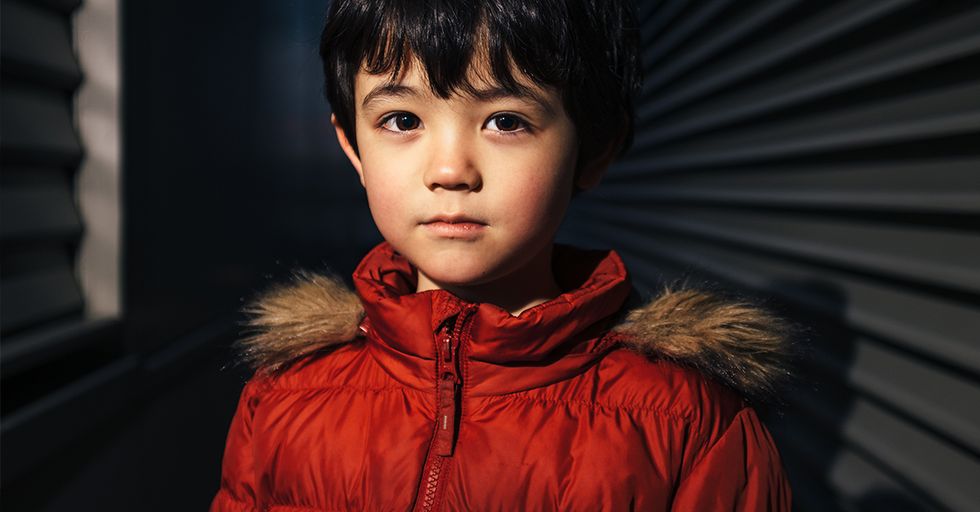 People Are Tweeting About Their Kids Saying They Have Lived Before

If you've ever met a human child, you know that sometimes very strange things come out of their mouths. Kids don't have much of a filter, which can make for hilarious moments. A kid I babysat once told me I'd "look better without that wig" but guess what? I was not wearing a wig. (I definitely reconsidered my current hairstyle after that).

They can also say some awkward things– just ask any mom whose face has turned completely red after their kid yelled out something like "Why is that lady wearing so much makeup?" in line at the supermarket.

But kids can also say things that are very creepy. I also used to babysit a kid who would wake up in the middle of the night, point to a dark corner of his room, and just sob. I later learned from his parents that was how he asked to get out of his crib, but for a few nights, I was convinced he was seeing a ghost.

According to a recent post on Twitter, it's pretty common for kids to casually mention some pretty weird stuff.

They've talked about having past lives, seeing ghosts, and a lot more completely creepy things that have made their adult parents want to sleep with a nightlight, too.

Valerie posted a status about a weird thing her kid said as she was putting him to bed.

Valerie is an editor at Scary Mommy (aptly named for this subject).

This is so specific! And he just casually mentioned it as if his mom is obviously aware of his past life.

Then he followed it up with this:

Soon, other people were jumping into the thread with their own weird stories of similar things kids had said to them.

Apparently kids remembering their past lives is very common?!

Or even things they said as kids.

"Oh hey mom, nbd but I died in this exact spot and came back to life as your child."

That is a totally normal thing to say.

How did she know this song?

@ValeeGrrl @TessFowler I remember when I was about 4 I would sing this song to help me go to sleep. Much later on i… https://t.co/HkE3dVmDFp
— JackJackIsMasked (@JackJackIsMasked)1546180946.0

Did her ghost grandma teach her the song? I mean it's also possible she'd just watched that VHS tape and forgotten, but I'm going with ghost grandma.

How do kids know this stuff?

Do they just have full-on conversations with ghosts and then forget about it when they grow up?

What is even going on here?

@ValeeGrrl @elle__keane Something similar happened to me when I was younger mum said I started speaking in an Ameri… https://t.co/DFsp6TLd4o
— Shan (@Shan)1546210691.0

IN A SAFE PLACE? *checks all my closets even though it's mid-day and I'm 31 years old*

Why do so many of these involve kids remembering how they "died?"

Why can't they be like "In my past life I knew of this really good Chinese food place around here, let's get takeout from there."

But let's take a little break here (you probably need one that this point) and understand if this is an actual thing.

Many people do believe in reincarnation, the belief that our soul moves on and inhabits a different body after death. And while this is mostly a religious belief, some scientists think it may be possible.

Dr. Jim Tucker, a psychologist at the University of Virginia, actually studies kids who have reported past lives.

And he's found that in some cases, kids can describe very specific details from the actual lives of deceased people they couldn't possibly have known but claim to be.

In one case, he worked with a young child who claimed he used to work in Hollywood in the 1930s.

The child, who lived in Oklahoma, was able to identify "himself" in a photo of a deceased Hollywood actor, name the person standing with him in the photo correctly, and was able to describe specific details about his life such as the names of several friends, the street he lived on, how many children he had and what his house looked like. That's spooky.

A kid remembering a past life when they are young is surprisingly common.

Whether they are really remembering something or just have an active imagination, Dr. Jim Tucker says the best way to handle it is to take them seriously, but not ask too many questions that might confuse or scare them. Most kids seem to forget about their "past lives" by age 5 and never talk about it again.

Ok, back to our regularly scheduled program of more creepy stories from Twitter.

Continue being freaked out.

I mean at least she had a horse.

I don't know why this one made me laugh.

@ValeeGrrl My daughter was about 7 when she informed us that she had been a chef in Australia.
— Dorothy Darling (@Dorothy Darling)1546274428.0

This kid claimed she was bored while she waited to be re-born.

I mean, it does seem boring. They probably don't even have Netflix there.

She had a lot to say as soon as possible.

@ValeeGrrl My sister, when she was very first talking, told my mum that she used to be a little boy with long hair… https://t.co/MhFQ8AYXEI
— Georgie King (@Georgie King)1546306751.0

"Ugh, I just need to learn how to talk so I can explain that I used to be a completely different person."

There are a lot of kids who claim to have "another mommy."

Which is very disconcerting.

This one is funny.

She just wanted her mom to know the cold, hard facts. In her last life, she had a penis. Deal with it.

@ValeeGrrl My little cousin, never having seen the titanic, one day told us that he drowned while the titanic was c… https://t.co/BnEHa9cA1S
— samantha (@samantha)1546226733.0

Are you sure he hasn't been sneaking viewings of that movie?

This isn't reincarnation, it's just confusing.

@ValeeGrrl @hippiegrlfriend My mom always tells me about how one time when I was like 4 she was brushing my hair an… https://t.co/IvrCRoRgAQ
— eternally salty (@eternally salty)1546201167.0

Maybe they did a body swap and just forgot?

He can't even drive yet!

But remembers driving a car from the 60s?

The ocean is scary, though.

Are you super creeped out yet?

Some kids don't talk about living lives before, but seem to be able to see people who are dead.

A lot of dead grandparent stories.

Which is kind of sweet?

Wait, who is ghostie?

@ValeeGrrl My brother had an imaginary friend named ghostie who he played with all the time. My first child also ha… https://t.co/Ff0z6jVURu
— Tavia (@Tavia)1546226717.0

This is cute, though.

@ValeeGrrl My mother died 4 years before my son was born. On several occasions he has told me how she sang him song… https://t.co/jCcBdf2hzJ
— Sarah Carmody (@Sarah Carmody)1546411901.0

They love each other! But a small thing– one of them is a ghost.

And then this happened:

@ValeeGrrl @QuietAtTheStart Mom told me at 3 during a party... I ran upstairs full speed from the the 1st floor (ou… https://t.co/9SMsF1ky9O
— blacklivesmatter (@blacklivesmatter)1546187986.0

That's right out of a horror movie. We'll end there because I'd like to sleep tonight.

Hopefully this hasn't freaked you out too badly.

And hey, the good news is maybe this isn't our only chance on Earth.