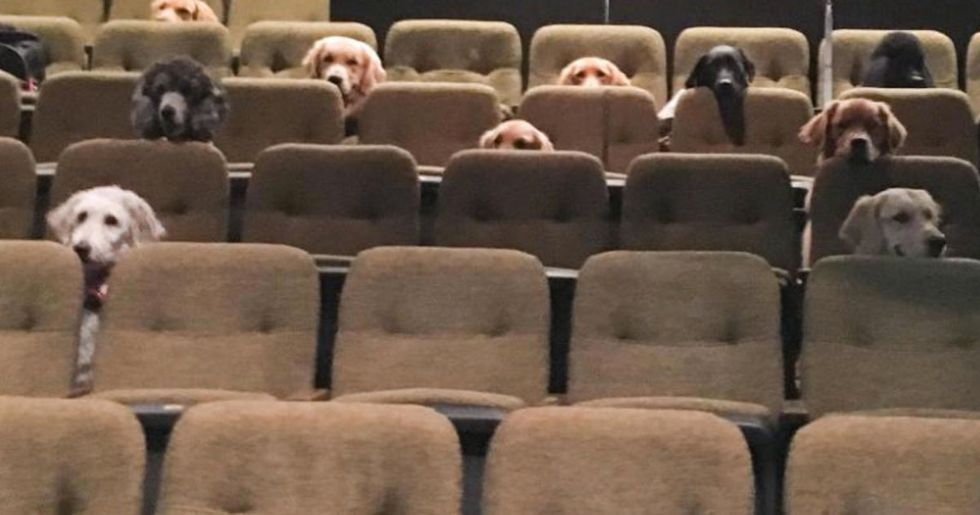 You might think that training service dogs is all strict rules, agility, and a lot of patience. But pictures released this week suggest that there's also a hugely fun side to the training program.

Images leaked from the K-9 Country Inn Working Service Dogs almost look like something from a cartoon. In them, a host of incredibly obedient dogs sit and watch the stage as a full musical production of Billy Elliot is performed at Ontario's Stratford Festival. And it looks as though the play was pretty enticing - well, if the dogs' reactions are anything to go by, that is.

Having a dog is one of life's purest joys.

But on top of all that joy, it's worth remembering that dog ownership is also a lot of work. They can be pretty mischevious creatures.

If you want your dog to be well behaved enough to be seen in public, you'll need to get in early and teach it the basics of obedience.

And there's one instance wherein this is even more true.

If you're trying to train a pet to work as a service dog, it's no mean feat. After all, these dogs essentially have a human's life their hands sometimes.

And many think that training involves one thing.

A lot of scolding. After all, if you want a dog to learn, you've got to be firm on them, right?

Because one story that's gone viral this week proves that it's not just about being strict with a service dog. It's also about teaching them how to have fun - in a responsible way, that is.

These pictures will melt your heart.

In them, we see a group of what can only be described as very good boys, learning how to be service dogs in the best way possible.

They train up service dogs for all manner of roles. The dogs in question are coming to the end of an intensive two-year program.

And it seems like they're all about to pass with flying colors.

Well, if their reactions to the musical performance are anything to go by. Honestly, they're a bunch of angels.

Alongside the usual obedience training, there's much more to the program.

The dogs have to go to some seriously stressful locations in order to test how well they can guide their human companion in the future - including riding the subway.

They do also get to have some fun, though.

The dogs are also taken to particularly large and exciting leisure locations, like to the zoo, to check how well they remain focused amidst much distraction.

But it was their final test which really captured the internet's attention.

At Canada's Ontario's Stratford Festival, the group of newly trained service dogs were required to watch a musical - and not create a scene of their own.

And boy, oh boy, did they pass the test.

The dogs all watched, entranced, sitting perfectly still, and behaving, quite frankly, much better than many humans do at the theater.

The play in question?

The dogs were watching Billy Elliot: The Musical - the heartwarming tale of a working-class boy from the North of England with a dream of becoming a ballet dancer.

Have you ever seen anything cuter?

"The dogs were extremely well behaved," the head of the festival said. "We hope they will join us for years to come."

"At the theater, the dogs are expected to sit under the seat or curl up at their handlers' feet while their humans enjoy the show," said head trainer, Laura Mackenzie.

Some dogs couldn't resist a little look. "They stayed calm and quiet throughout the performance, but a few curious pups peeked their furry heads over the seats to catch a few minutes of the show," Mackenzie went on.

The dogs all passed with flying colors.

The performance that they watched was designed by the theatre as a "relaxed" performance - meaning there were less loud noises and flashing lights.

Many made a truly excellent joke.

Hey, what if these dogs were actually watching the musical Cats??

These dogs have made a real splash online.

The empty seats would be understandable if this was a performance of CATS. 🐱 #DogsDeserveTheirOwnMusical 🐶 https://t.co/KnEx9rC37u
— Mark Hamill (@Mark Hamill)1565987226.0

Even actor, Mark Hamill, got in on the action, congratulating the cuties on their excellent behavior.

We look forward to seeing plenty more dogs watching musicals in the future.

And for more adorable doggy content, keep scrolling for some excellent photography.