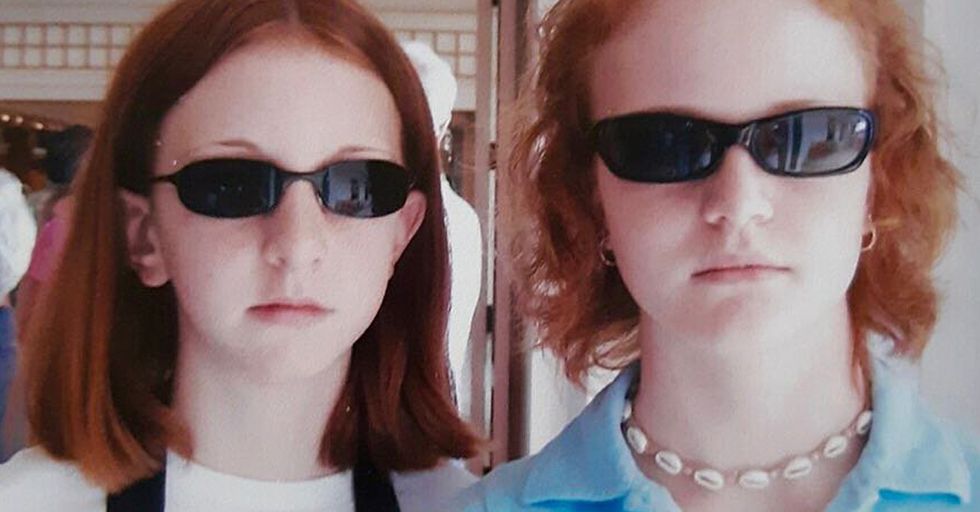 Listen, puberty is a tough time for absolutely everyone. Our voices are changing, our bodies are all weird and out-of-proportion, and our faces are positively covered in both acne and self-doubt. No one looks good during puberty. No one. Every photo from this time is a cringe-worthy photo.

And yet, some people look even more not good during puberty than others. They get bad haircuts, wear strange orthodontic equipment, and buy clothes that do not flatter their body types.

Thankfully, for the sake of our entertainment, some people grow out of that awkward phase and became confident enough in their appearance that they can post photos of them at their worst. The subreddit /r/BlunderYears features photos of people from their blunder years — the years they thought they were looking good but were, in fact, screwing it up big time. Have a laugh at these photos — the people in them sure did — and let yourself feel a little better about your puberty look. No way was it this bad.

Not sure what he'd have to regret. Those weapons were wielded by the Ninja Turtle Raphael.

My good friend Josh showing off his sais. He still says he has no regrets about this. - aignam

A magician and a Pokemon trainer? Hubba hubba.

2004. Trying to take a MySpace photo while no one was at home. - CrazySunshineWizard

"I am from the internet. Come with me."

Thought it would be cool to make KNEX body armor. - mistermajik2000

This kid is going to rebel by joining the football team.

10 years ago and our first family photo, it looked like we stole someones kid. - Skissored

I won an award at school. I was told to dress up for a photo. I thought they meant like in a costume. Cowboy me made all the sense in the world at the time. One moment captured my entire life. - ItsNeverTwins

They're the same picture.

After living with an extremely awkward senior portrait for 15 years, I tracked down the original photographer, set, and props for a remake that highlights how much I've grown as a person. - InflatableRegret

I learned my lesson about taking a razor to my eyebrows. Big oof. - leafydew

My wife’s school picture with her most prized possession at the time. An Evanescence CD. - the-passenger77

Didn't know the Men in Black had casual Fridays.

Hawaii wasn’t ready for my ice cold sister and I in 2003. - mrspetie

Aww, I do fear you sweetie.

Me in 2009, I called myself Brandon Bloodbath. - KINGCOMEDOWN

A magician and a fry cook? Hubba hubba.

I spent most of my high school career working at Sonic instead of playing sports. I thought it would be funny to wear a Sonic uniform instead of a Letterman's jacket for my senior picture. So in 2001... that happened. - themidwestempire

My mom dressed me like this so I was easy to spot when she picked me up. - pluckems

In middle school, I told everyone I had a older boyfriend, who also happened to be an Abercrombie model. This was my proof. - iamlion44

She's got that Lego-person hair.

I was 10 when I realized people with no bangs had grown them out, not cut them off. - Evilrazzberi09

Cool that she snagged a date with a 1950s gangster.

Prom. 2006. My date was extremely out of my league. She looks amazing, while I stand there looking cringe-worthy with that fedora and cane. - MrJ429

This looks like one of Michele's friends from <Full House.

My dad always thought this haircut looked incredible on me. My mom thought the shirt was incredible. Looking back at 2nd grade me is incredible. I'm a female. - kikiglitz

It'd almost be financially irresponsible for his parents to not at least consider selling ad space.

My family dubbed me "fivehead." - Forhaver

Personally, I would sue... someone.

Hope this makes your day a little better. I present, me as a kid. - zwaymire

Got a real badass over here.

Sophomore year of high school, I would show up like this and hang out behind the library with my little edgy kids group. - ChaloPerea98

When you do something wrong at your friend's house and his mom sees.

It's like when Spock was split into his good and evil selves.

Me and my twin sister at sophomore formal, you can guess which one is me. - Yogabbagaabbaa

It didn't help that the photographer then held up a live bat.

My original 3rd grade school photo (left). Mom demanded a retake (right) with the instructions "SMILE! Show some TEETH!" Note which one got framed, and the caption on the envelope. - [account deleted]

"Ma'am, we close in three minutes. Are you sure you want to get him a haircut now?"

"Ginger hair? Freckles? Pale skin? This kid's going to be too popular at school. Can you level the playing field a bit?" said my parents to the hairdresser - LancingLad

The spikes are a natural defense against predators.

Homecoming 2012. Yes that’s my real hair. Yes I spent an hour on it every day. - shortnblu

My Senior yearbook photo. It was 2002, so frosted tips and N*Sync were actually cool. - CatMaster3000

I want to cradle this boy's face in my hands and tell him that one day, everything is going to be all right.

14 year old me Photoshopping out my dad for Britney Spears. This is just so toxic. - heymanmaniac