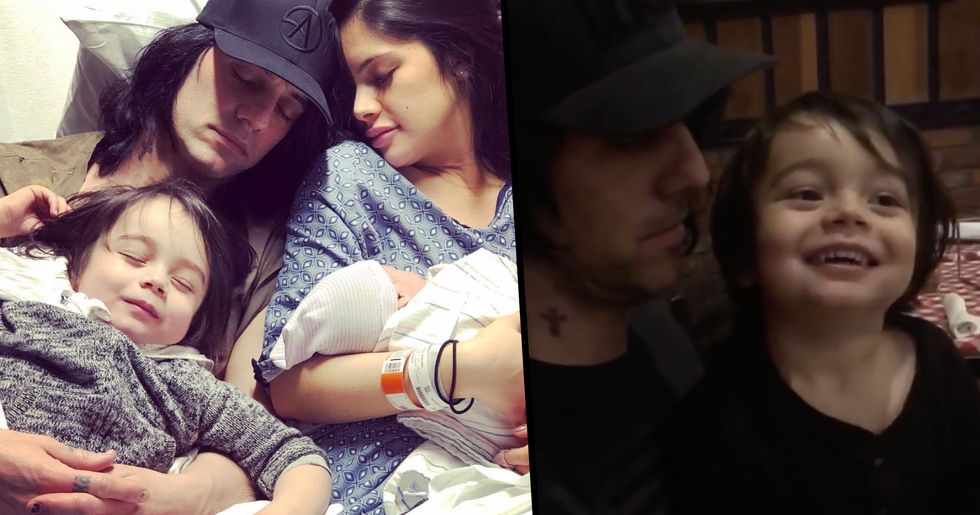 Criss Angel Says His 5-Year-Old Son's Cancer Is Back

Criss Angel is the ultimate performer.

Anyone who has been lucky enough to see one of his shows will know that the illusionist, magician, and musician certainly knows what he's doing.

Sadly Criss Angel has less control over the sorry circumstances that have engulfed his personal life.

Here's the story of Criss Angel's little boy that will surely break your heart.

Criss Angel made a name for himself through magic.

Angel's first television appearance was in 1994, as part of a one-hour ABC primetime special entitled Secrets.

Criss Angel really broke into the mainstream in 2002 when he performed his impressive water torture cell trick in Times Square, NYC. Angel spent 24 hours shackled underwater in a phone booth-sized water torture cell. People started to get that this guy was the business.

Angel became a household name through the success of his hit show, Criss Angel's Mindfreak. The show ran for 5 years, broadcasted on the A&E television network.

Criss now tours his show across the U.S.

The success of his show is unprecedented, Angel even won the coveted title of having "The best show in Vegas."

Angel hit it off with Australian singer, Shaunyl Benson and the couple has been together since 2012. They have two children together, Johnny Christopher, born in 2014, and Xristos Yanni, born in 2019.

At 18 months old, Johnny Christopher was diagnosed with cancer.

"His life had barely begun and Leukemia was trying to take him away from us."

In a heart-wrenching Instagram post, Criss' partner, Shaunyl described what it was like when Johnny Cristopher was first diagnosed. She wrote, "Those words from the doctor still ring in my head like a nightmare. I honestly never knew hurt or heartbreak like that until that day."

Johnny Christopher spent 3 years in and out of the hospital.

The ordeal took a massive strain on the whole family.

Having a child with cancer is incredibly difficult.

The uncertainty surrounding Johnny Christopher's condition kept his parents in a constant state of worry.

"He has a light like no other, that shines so darn brightly."

In another heartfelt message by Shaunyl, who was only 24 when JC was born, she writes: "I can’t help but feel like he is everything I ever did right in my life and everything I was supposed to be here for."

Even though the family had to spend a lot of time at the hospital...

Johnny Christopher's parents ensured that he also got time to experience being a kid.

In between hospital appointments they made sure JC had fun.

Alongside this sweet shot, Shaunyl explained how they "spent the morning at the hospital, only to be pushed back another week for chemo, as Johnny's blood levels weren't ready for the next dose. So this afternoon we went for a.. roll."

Fresh air does us all a world of good.

Criss and Shaunyl have given their little boy so much love and attention and have been praying for years that his chemotherapy treatment would work.

Earlier this year, Johnny Christopher got a little brother.

This year also saw Criss be nominated and win the prestigious "Greatest Of All Time" Award. The family also got some further news in 2019.

After fighting leukemia for 3 years it seemed like the pain and worrying was over. Johnny Christopher's cancer had gone into remission. The family was overjoyed.

This August, Johnny Christopher had his first day at school. Sadly, recent developments will mean he will have to put his education on hold.

Criss wants to do everything in his power to help his boy.

Since Johnny Christopher was first diagnosed with leukemia, Criss has been doing endless work for charities raising money for pediatric cancer. Angel organized an event, "Criss Angel H.e.l.p (Healing every life possible) which brought together performers from all over the world and raised a million dollars.

After almost a year in remission, Criss revealed to TMZ that his son's cancer has returned.

The family is going to make sure JC gets to continue enjoying life.

Speaking to TMZ at LAX on Tuesday, Angel confirmed JC's cancer had returned but that he was going to, "make sure the little guy has the time of his life in SoCal."

Criss Angel is ready to carry on fighting.

Our thoughts go out to the entire family and we hope they get through this difficult time. Continue scrolling to read about the mom who got the all-clear after battling cancer and then ten minutes later won $1.2 million. Seems your luck really can turn around!