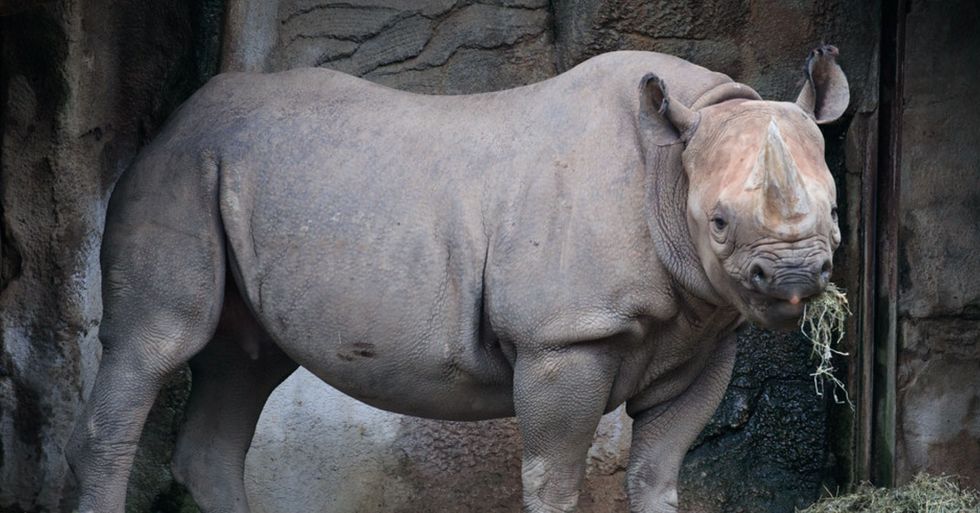 Critically Endangered Black Rhino is Pregnant and Due Any Day Now

We finally have some happy news this week, as Cincinnati zoo expects to welcome it's newest member "any day now."

Keep scrolling for more on the exciting new arrival...

Zoos everywhere have got a bad wrap over the years.

And while all animals would be better off roaming free...

...For some this just isn't possible anymore.

Due to loss of habitat and the threat of poachers, sadly it isn't safe for some species to live how they once did.

But measures have been put in place to protect those species that are on the brink of extinction.

Giving them a second chance at survival.

There are currently ninety-nine zoos in America keeping rhinos.

And one zoo, in particular, has some pretty amazing news...

Cincinnati zoo has its own resident black rhino who is expecting a very special new arrival.

And it's due at any moment.

Keepers are excited as in recent years, rhino numbers have been dwindling.

While these majestic animals once flourished throughout various parts of Europe, Asia, and Africa, today, it is believed that as little as 29,000 remain in the wild, according to the WWF.

It is a devastating situation.

Today, rhinos can only be found in parts of Africa, and very few are able to survive outside of national parks and nature reserves.

How can a species, that once thrived in the wild, struggle to exist without human assistance?

Well, poachers can be thanked for that.

For decades now, rhinos have been poached to the brink of extinction... And it is all for their horn.

The demand for rhino horn has long been rife across many parts of Asia.

Rhino horn is used in traditional Chinese medicine, but, more commonly, it is used as a status symbol to display success and wealth.

Over the years, the slaughter of rhinos has become steadily more controversial...

But this means that poachers have only been becoming a larger threat.

Poachers are now being supplied by international criminal gangs with sophisticated equipment to track and kill rhinos...

Meaning that they have been killing rhinos at an even more alarming rate than before.

The issue of poaching has been notoriously difficult to manage...

But with the help of zoos, Rhino numbers have been gradually increasing.

And conservation efforts seem to be paying off.

Especially for Cincinnati zoo as their resident black rhino, Seyia is pregnant and "due any day."

Seyia is an eastern black rhino.

Whose species is critically endangered, meaning this news is essential for the survival of her kind.

BIG news! Seyia is pregnant and due any day! Eastern black rhinos are critically endangered, so this is great news… https://t.co/Su2IGdUfXS
— Cincinnati Zoo (@Cincinnati Zoo)1597100454.0

The zoo wrote: "BIG news! Seyia is pregnant and due any day! Eastern black rhinos are critically endangered, so this is great news for the species."

This will be her second calf.

Seyia gave birth to her first calf, Kendi in 2017, just a month before her fourth birthday.

They are amazed that she is once again pregnant.

"Every rhino has its own personality and Seyia is a real sweetie, yet definitely has some sass and spunk to her."

"She loves attention - getting a good rub down, taking a bubble bath, and most of all, interacting with her keepers during training sessions."

"Seyia has learned so much over the past year here in Cincinnati. We train all of our animals to do lots of different husbandry behaviors, which helps us provide them with the best care possible."

This is especially important when caring for rhinos.

"The black rhino has a reputation for being extremely aggressive, charging readily at threats. They have even been observed charging tree trunks and termite mounds in the wild! So it takes a very strong bond between keepers and their rhinos to accomplish all that we need to do with them. Only once this trust is formed between keeper and rhino can training begin."

Seyia was in labor for about 30 minutes with Kendi.

Kendi means 'the loved one' in Swahili, which zookeepers thought was perfect.

Now it's just a waiting game for the next baby to arrive.

Keep scrolling for more on how the critically endangered list is benefiting from new anti-poaching task force...