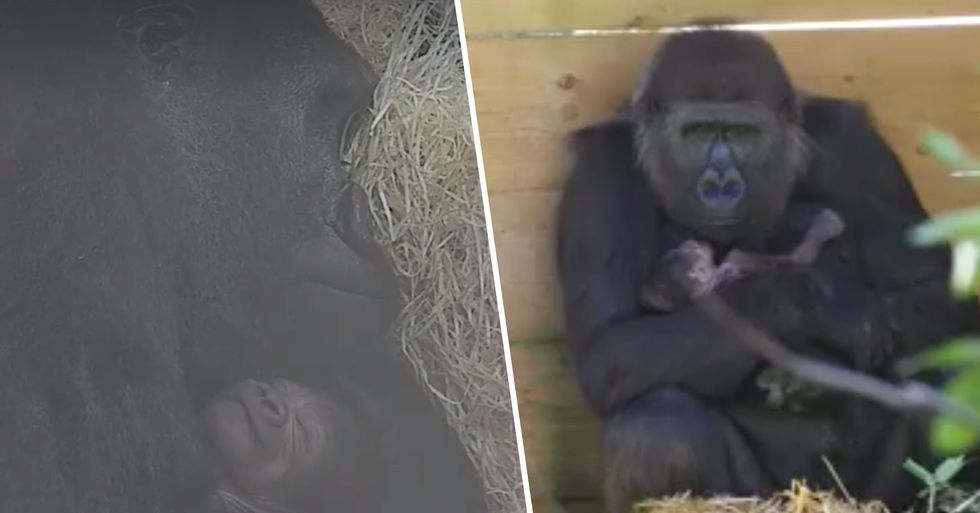 A zoo in the UK has just welcomed an incredible new arrival into the world, and the pregnancy is crucial for the survival of their species.

Keep scrolling to see the adorable video, and to find out why this pregnancy is so important...

With the likes of trophy hunting still being practiced, many species are rapidly depleting in numbers.

It is a devastating reality that the majority of animals that are extinct are so because of humans.

Despite its barbaric practice, hunting is still very much a popular sport and way too many animals are unnecessarily killed because of it.

But Africa is sadly the world’s hotspot for hunting and poaching.

Trophy hunting is all too common in Africa...

And its native animals, such as elephants, lions, zebras, and antelopes, are ruthlessly killed every year to simply become a trophy for the hunter.

Many try to argue that trophy hunting is actually saving wildlife...

But we all know that killing wild animals for sport is not good for “conservation"… at all.

Western Lowland Gorillas are among those species whose numbers are rapidly deleting.

This type of gorilla is 1 of 3 subspecies of the western gorilla and is found primarily forest and swampland in central Africa.

While western lowland gorillas are considered one of the more populous gorilla subspecies, they face several threats...

The first being deforestation to their natural habitat - destroying their homes.

Deforestation leads to an even more heartbreaking scenario.

Cutting down their natural habitat clears the way for people who hunt gorillas for bushmeat. According to National Geographic, near eighty percent of western lowland gorillas live in unprotected areas that are vulnerable to poaching.

Rise in temperatures dry out the area, making it more vulnerable to forest fires.

Humans have undoubtedly played a huge part in why these gorillas are now classified as critically endangered.

But the likes of deforestation and climate change aren't the sole reason. Their numbers have declined rapidly due to infectious diseases and it is believed that the Ebola outbreak may have killed as much as a third of western lowland gorillas in the early '00s.

These goriilas are now protected by national and international laws.

But historically, enforcement of these laws has been minimal - meaning the numbers are still decreasing. As of 2016, their numbers were estimated to be at 362,000 in the wild, but they are falling at a rate of 2.7% per year, according to phys.org.

This is why breeding programs are essential.

Zoos across the globe have made it their mission to help these critically endangered gorillas and replenish their numbers.

And one zoo in Bristol, UK, has shared some incredible news.

One of their Western lowland gorillas has given birth!

9-year-old Kala has given birth to a gorgeous baby gorilla!

Jock, the baby's father was nearby throughout the birth.

Zookeepers arrived at the enclosure in the early hours to find Kala had given birth by herself and was sat cradling the newborn.

Meet Kala, a western lowland gorilla, and her beautiful baby, who she gave birth to on Wednesday at Bristol Zoo, En… https://t.co/WT4yjTRXg8
— Dax Gigandet (@Dax Gigandet)1598214165.0

Lynsey Bugg, curator of mammals at Bristol Zoo, said: "We are all thrilled. There is something very special about seeing a new-born baby gorilla, they are such an iconic and charismatic species."

She said: "We knew we were having a baby gorilla due and we've been on baby watch for a little while."

"On Tuesday Kala looked nice and comfortable and not causing us any concerns or worries. I came in yesterday morning to find a brand new baby in the house. It was lovely."

Sadly, last year Kala had a baby that didn't survive, which is why this baby was so important to keepers.

"Last year she did have a pregnancy and birth but it didn't go as planned and unfortunately the baby didn't survive. "We were a bit on tenterhooks this time round and it is so lovely that she was able to give birth naturally and baby and mum are really well."

She is part of a breeding program set out by the zoo to save the species from extinction.

Lynsey added: "She is being very attentive and taking good care of her baby. It's very early days but we are cautiously optimistic. The early signs are good and the baby looks to be a good size and is strong."

It might be a while before we find out the gender of the baby.

Lynsey explained: "They are not all that easy to sex and we want to have a few looks before we are certain."

Take a look at the adorable video below...