As more and accounts of sexual assault pour into the public consciousness, it's worth reminding people of a simple concept. | 22 Words 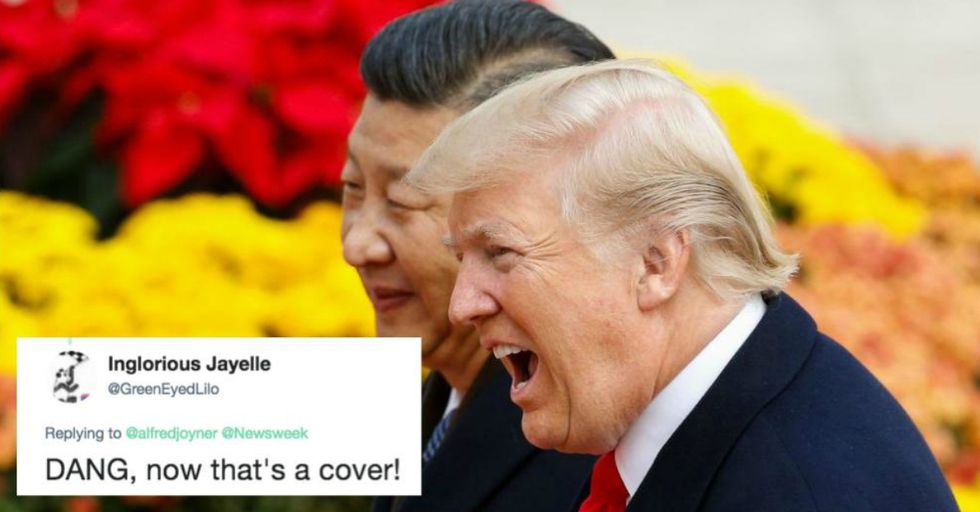 Feminism has been enjoying a resurgence lately. Ever since the contentious 2016 election (and even before that), more women than ever are comfortable identifying themselves as feminist. Even pop stars have gotten in on the game, and for good reason. Feminism is literally defined as "the advocacy of women's rights on the basis of the equality of the sexes."

But not everyone is on the feminism bandwagon. Critics of the social movement say that empowerment of women comes at the cost of men. Now, a recent Newsweek magazine cover is adding fuel to the flame.

The magazine's cover for its Nov. 17 issue shows a woman's hand popping a phallic-shaped balloon. With the blurb "#MeToo is taking down powerful men in all fields. Is Donald Trump next?"

The cover story, "How Donald Trump rules America’s Garden of Dicks and sparked the #MeToo movement," focuses on the recent history of sexual harassment with special emphasis on Donald Trump's pattern of harassing women. It includes such horrific anecdotes as, "To put Trump’s history in perspective, while Bill Clinton was seducing a White House intern in 1996, Trump was at a New York City restaurant allegedly having women walk across a table, while looking up their skirts and commenting on their genitalia with model agent John Casablancas (who had brought five or six models along for Trump’s inspection)."

The cover has drawn criticism from many factions, with people lamenting the fact that it equates female empowerment with emasculation.

@Newsweek This is a terrible cover. Depicting women who say they were sexually assaulted as just wanting to hurt dude's dicks is insensitive
— Josselyn Berry (@Josselyn Berry)1510239678.0

This idea that the increased agency of women is emasculating men is a conversation that's becoming increasingly prevalent. Men – particularly white men – are complaining that the push towards feminism comes at their expense. "I am all for women empowerment but it’s like they want to empower themselves so much that they want to eliminate men from the equation," Jose Oliveras, an independent contractor said in an interview with the Guardian.

It's worth noting, however, that these fears are not new. When the women's suffrage movement began in 1848 (after several stalled attempts beforehand) men accused women of wanting to take over even though all women wanted was equal rights.

These fears are still prevalent, with men saying that while they understand women's struggles, they didn't chose to be born male. As Tom Coss, a Seattle-based butcher explained to the Guardian. "I might be more comfortable walking home at night down a dark city street. I might be more likely to get a job, but I am not necessarily the cause for any of those things. You’re born into that privilege, but you didn’t do anything to expedite that privilege."

Covers like "Newsweek's" do not help the situation and feed into the narrative that women's empowerment comes at the expense of men. Which is why people are protesting it.

@JessicaValenti @JessicaWakeman Thank you. This is a MAJOR ugh. Why does every attempt at female empowerment and sa… https://t.co/OPN9cKgYvg
— Lily Burana 🗽 (@Lily Burana 🗽)1510239689.0

A wide swath of Twitter users have condemned the cover for its insensitivity. People simply do not like the cover.

This is the most disgusting @Newsweek cover--or any news mag cover--I've ever seen. It dismisses the seriousness and trauma of sexual assault & destroyed lives. I'm canceling my subscription today. H/t @cashUT pic.twitter.com/YBAPzpChOg

It’s remarkable how wrong this Newsweek cover of a woman deflating a balloon penis is: https://t.co/eg2u14JW5r pic.twitter.com/ekKVhY02aj

.@Newsweek’s cover is in poor taste. This isn’t about a woman popping a man’s penis it’s about several women being harmed, hunted & silenced

Terrible cover in so many ways. The painted nails, the popping of the inflated penis and the comic book styling. Bravo. You just turned exposure of sexual assault into satire. Recall this cover.

As more and accounts of sexual assault pour into the public consciousness, it's worth reminding people of a simple concept.

@Newsweek So men's dicks are being deflated because they're being called out on sexually harassing and assaulting w… https://t.co/lbLCeTrloi
— Jarvis (@Jarvis)1510239814.0

When commenting on sexual predators, it's best not to conflate the fight against sexual predation with male emasculation. When in doubt, remember the victims. Just saying.