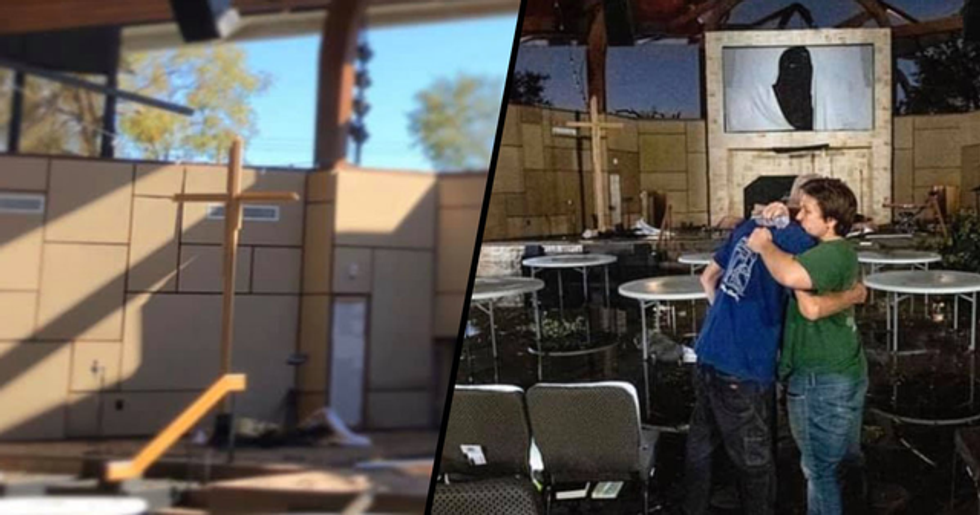 In life, we often find ourselves looking for signs of a higher power, regardless of our stance on the concept of religion.

Whether it be the shapes of the clouds, the presence of a robin, or Jesus' face in a burnt piece of toast, we're constantly (and often subconsciously...) on the look-out for signs from the big man in the sky.

And a church in Dallas is convinced that they have received a crystal clear sign from their Lord above.

After being ravaged by the horrific tornadoes over the weekend, the Northway Church in Northwest Dallas was left in ruins... Apart from one wooden cross, which remained standing defiantly among the rubble.

Even my cynical atheist mind was taken back by this...

Dallas experienced a severe weather outbreak over the weekend.

And, as a result, the Texan city was slammed by at least nine tornadoes throughout the duration of Sunday evening.

The damage is staggering.

Thousands of residents were left without power as a result of the meteorological battering, and buildings across the city were left barely standing.

Terrifying footage has been emerging from the city...

And truly apocalyptic scenes can be seen, as lightning strikes the sky and debris flies mere inches passed terrified onlookers.

And petrified residents shared videos of the tornadoes with each other over social media platforms.

No one in Dallas was killed in the storm...

But a line of storms continued on to parts of the Great Plains, eventually killing two people.

As the storm passed through northwestern Arkansas...

One man was killed after a tree fell on his home, said Robert McGowen, a spokesman for Benton County Emergency Management.

And another victim was killed as the storm passed through Oklahoma...

After a tree fell on their mobile home during the storms Sunday night, 3 people were left trapped inside. Rescue operations were able to locate two of them and take them out but, tragically, the third person did not survive.

A handful of other people were injured in the storm...

Three people were taken to hospitals with storm-related injuries that were not considered as life-threatening, according to the Dallas Office of Emergency Management.

It's completely miraculous that more people weren't hurt in the ferocious storm.

"Considering the path that the storm took, it went across a pretty densely populated part of our city, I think we should consider ourselves very fortunate that we did not lose any lives, no fatalities and no serious injuries in last night's storm," Dallas Mayor Eric Johnson said at a news conference.

And some may even go as far as calling it a miracle...

Some people have been looking past the horrific damage and destruction to regard the 9 tornadoes as a sign of "God's love".

It's almost an admirable dedication...

Imagine being passionate enough about something, that you fully convince yourself that traumatic storms and the mass destruction are a sign of a higher power's love? I, personally, can't get my head around that ideology... But each to their own, right?

And one church is convinced that they have a sign from God himself.

The Northway Church in Northwest Dallas took quite a battering in the storm... So much for God's love, right?

The church had its roof torn off in the storm...

And much of the building was left in complete ruins.

Members of the church have come together following the destruction of their place of worship...

"The church building was severely damaged by the tornado that came through northwest Dallas earlier this evening. No one was injured but please be in prayer." they wrote on their Facebook page.

However, despite the mass destruction...

Somehow, the cross wasn't torn down with the rest of the building.

And the image of the cross, which was made by a member of the church when they launched the campus 10 years ago, quickly went viral after it was shared to Facebook by the lead pastor, Shea Sumlin.

Sumlin sees the defiant cross as a message from God.

"For me and for our church, it's a symbolic source of encouragement," Sumlin told Fox News. "Christ and His cross are what still stands for us."

He sees the cross as a symbol of Jesus Christ's strength.

"Here an F-3 tornado ripped off our roof...yet here's this wooden cross, that I have no idea how it didn't get picked up," he said. "Even though our building is broken, our body is as whole and alive as we've ever been because of the hope of Jesus Christ."

The Northway pastor also said that it is a poignant reminder of Matthew 16 in the Bible.

In this passage, Jesus tells Peter and other disciples that His church will be built on a rock that not even hell can destroy it. "It's a beautiful reminder that Christ is still present in the midst of this suffering and chaos," Sumlin added.

On Wednesday night, the church is hosting a community meal for the entire area of Northwest Dallas with thousands of free meals donated by food vendors for those affected by the storms. Here's hoping that God will send more "messages" of hope to everyone else in Dallas...