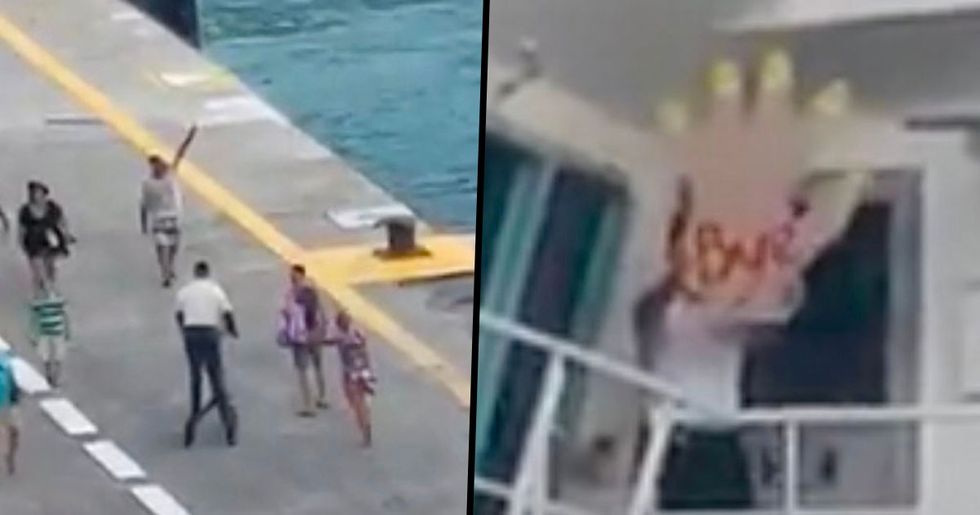 There's something that's just so luxurious about cruise ships. Whether it's the extravagant decks complete with pools and jacuzzi's, unlimited snacks, or the endless list of activities, going on a cruise seems like the ultimate way to get a much-needed relaxation fix.

But a water-themed getaway can prove more relaxing for some than others. Especially for 2 unfortunate passengers, who arrived late for their Royal Caribbean ship and were left behind as they helplessly watched the liner sail off.

Oh, and if they weren't already having a bad enough day, the pair ended up at the center of quite a funny joke involving a giant hand waving them off.

Though we aren't sure that the stranded passengers found the situation quite as hilarious, the video of the boat setting sail without them is doing the rounds of the internet, and people think that one crew member's antics are rather amusing.

Keep scrolling to see the video for yourself.

For many, a cruise is the ultimate getaway

These giant ships bare no resemblance to a regular boat.

They are havens of luxury.

Some of the most extravagant of cruise ships come complete with swimming pools, hot tubs, and even water slides.

You barely even remember that you're at sea.

Decked out (see what we did there) with everything from restaurants to nightclubs, these ships are pretty much huge floating hotels.

They also offer you the opportunity to see a vast array of breathtaking scenery.

Often taking multiple pit-stops per cruise, tourists get the opportunity to visit several must-see sites within a short amount of time.

And, of course, the views rarely disappoint.

Most popular cruises travel around tropical areas such as the Bahamas, giving tourists a touch of paradise with the clear blue waters and white sand beaches.

We're already getting major vacation envy just talking about it.

We can picture it right now: relaxing by the pool with a cocktail, being treated like a Kardashian, all while sailing to the tropical bliss that is the Bahamas. What could be better?

Although, unsurprisingly, some of the best cruises can come at a hefty price tag.

When you want luxury, you have to pay the price for it, sadly.

So if you're forking out for the trip for a lifetime, you want it to all run smoothly.

And when it comes to cruises, there's one important thing to note - there's a schedule that you must adhere to. After all, there's nothing worse than waiting around for that friend who's always holding the whole group up, so who would want to do it at sea?

But, as always, there are people that never seem to have learned the fine art of timekeeping.

Like those people who will forever be on the final calling for boarding on the plane or frantically texting you that they are on their way when they are in fact, still in bed.

Well, one pair of passengers learned the importance of timekeeping the hard way.

They were traveling on the "Freedom of The Seas" Royal Caribbean liner which was setting sail from St Maarten in the Caribbean when they landed themselves in an unfortunate situation.

They arrived late to the ship.

Instead of staying ahead of schedule and keeping a close eye on the time, these 2 passengers had other ideas.

And, of course, the ship set sail without them.

The bewildered pair were left behind as the ship departed for St Kitts, but that wasn't the end of their unfortunate ordeal.

As the stranded pair watched the ship sail away, a cruise ship crew member appeared on the deck with an unlikely prop.

She was waving a giant hand with the word "bye" written on it. Talk about rubbing it in.

The best part? The whole thing was captured on camera.

An onlooker whipped out their phone to film the events as they unfolded. The person filming the clip can be heard saying "they've missed it" before zooming in on the crew member, who can be seen holding the giant fake hand, complete with yellow nails and the word "bye" written across the top.

Although the passengers wouldn't have seen the funny side, we think that it's pretty hilarious.

We're sure that the passengers won't be making this mistake again.

Take a look at the video for yourself.

Cruceros Puerto Rico shared the clip to its Facebook page, along with a warning to other passengers whose timekeeping isn't up to scratch. "Today, two passengers of the Freedom of the Seas arrived late to board the cruise and stayed on the island of St Maarten. "They will have to take a flight to the next destination of the ship. "It is important to be aware of the boarding hours on your trips."

But it turns out that the giant hand wasn't intended for the unlucky passengers after all.

A spokeswoman told Mirror Online: “Our crew member was not directing her wave to our guests on the pier. "She was waving at our sister ship, Anthem of the Seas, which was also in port and scheduled for departure. The gesture was one of respect and nautical camaraderie between crew members. "We regret the inconvenience our guests experienced due the late return to the pier. "Guests are encouraged to be back by all-aboard time. Departure times are routinely announced onboard, posted in shipboard newsletters and at gangways to keep our guests informed at all ports of call."

Either way, it was hilarious timing.

The crew member might not have intended to make the passengers the center of a slightly cruel, very funny jibe, but the clip still makes for laugh-inducing viewing.

And the internet seemed to agree.

Although others had the jibe sussed out, with many Twitter users pointing out that the seemingly "savage" move was just a case of the crew member waving off the anchored boat at the dock.

These passengers certainly weren't the first to miss their ship.

...And they won't be the last. One couple, who were also traveling on a Royal Caribbean cruise ship, had to watch as the ship pulled away from its pit-stop in Nassau, Bahamas. To make it worse, the couple's attempts to catch the attention of the departing boat were no use. Keep scrolling to find out the fate of the stranded passengers, and why the internet has zero sympathy for them.