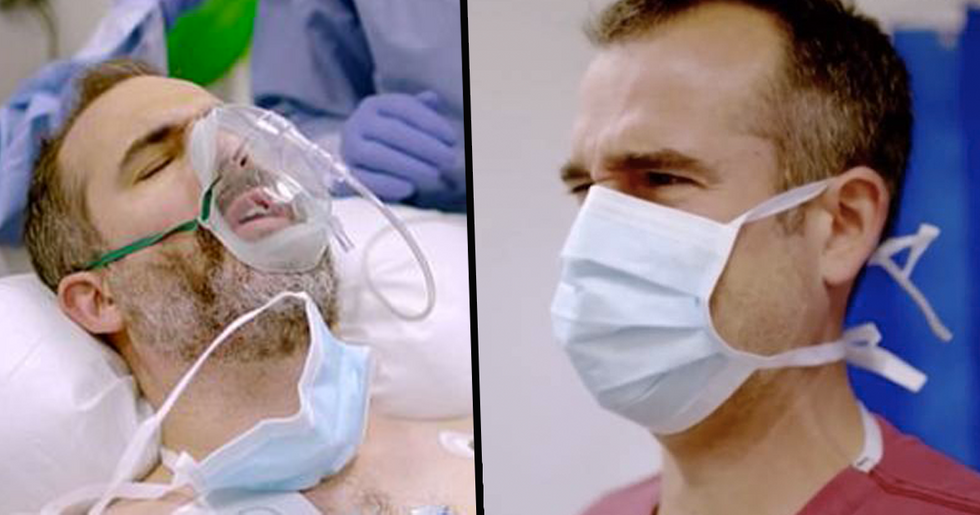 It's a heartwrenching watch...

A doctor had to watch his identical twin brother be rushed into hospital with coronavirus complications.

And the events the followed were even more terrifying.

We can't imagine what he must have been going through.

In the UK, the most terrifying story has emerged.

Dr Chris van Tulleken, who was working for on the frontlines of the UK's National Health Service (NHS), received a devastating call about his twin brother.

The infectious diseases doctor has been working at a hospital in central London, returning to medicine after a decade amid the pandemic.

But he never expected to see his identical twin during this time.

After witnessing the horrifying effects of the virus on patients...

Dr. Xand, who has a background in humanitarian medicine, had been displaying the classic symptoms of the virus.

Including a fever, loss of taste, and a persistent cough.

After waking up at 3 am in a panic, Dr. Xand felt incredibly unwell and sick

The palpitations got so bad that he required urgent medical care.

After running some tests, doctors discover his heart was beating irregularly and his blood pressure was low.

"It's like my heart is doing a marathon and I'm sat here doing nothing," said Dr. Xand.

Doctors then made the decision to give Dr. Xand a huge electric shock.

The shock stopped his heart completely with the aim of allowing it to restart naturally.

But for Dr. Chris, watching his twin goes through this was a terrifying ordeal.

Dr. Chris said that at the time, he wasn't sure his brother's heart would even start again.

"When you're a twin, we're not telepathic, but Xand is half my identity. There's no one I'm closer to," explained Dr. Chris.

After being shocked, Dr Xand. flatlines...

But, after a few agonizing seconds, his heart restarts again. Dr Chris admitted: "I wasn't expecting the flatline for so long afterwards. It wasn't nice watching it being done."

After waking up, Dr. Xand thanked the staff for saving his life.

Since the cameras stopped rolling in early May, Dr. Xand has had another episode of extreme heart palpitations and was admitted to hospital again.

And luckily he was discharged the same day.

Watch the terrifying footage below:

The tense moment when your identical twin flatlines in A&E, as a result of treatment for the ongoing after-effects… https://t.co/7h9W2NN6HQ
— BBC Press Office (@BBC Press Office)1596639708.0

We hope that Dr. Xand is doing well and has made a full recovery.