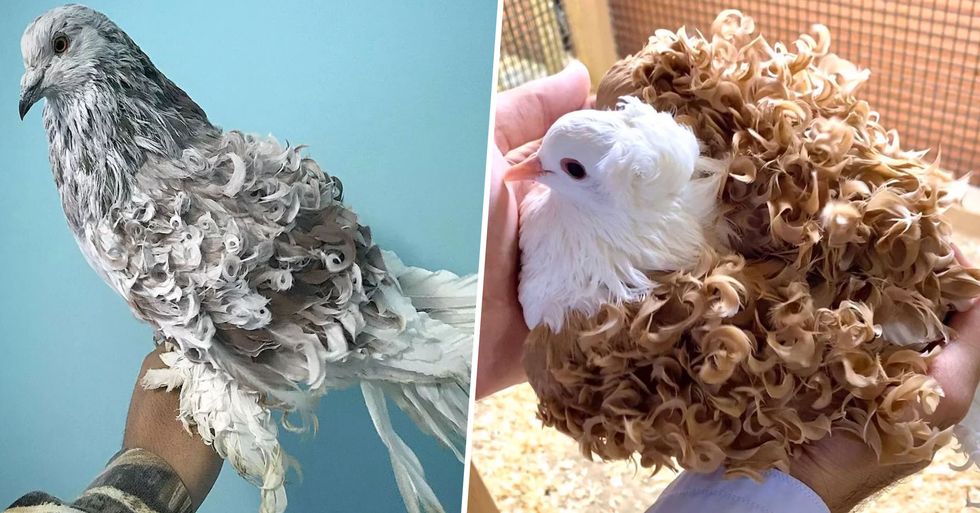 Pigeons aren't just city bin scavengers we've all grown accustomed to on our strolls through the concrete jungle.

Believe it or not, there are thousands of breeds of pigeon across the world, and the Curly Frillback is probably the cutest bird we've ever seen...

Pigeons aren't known for being the most beautiful of birds.

In fact, most city pigeons are missing toes, feet and generally, just look a bit worse for wear.

But what you probably didn't know is there are many different types of pigeons...

Some of which will change your mind about the average city bird forever.

Native to South-East Asian countries, the pink necked green pigeon is popular for its stunning pink, green, and purple plumage. Imagine seeing one of these pecking around the streets of New York...

This pigeon, which is found on small islands and in the coastal regions of India, is widely recognized for it's somewhat "gothic" black and green plumage, and is believed to be the closest living relative to the extinct dodo.

This pigeon, which is native to the rainforests of New Guinea, was given its royal namesake as a result of the elegant lace-like crests protruding from its head in a crown-like manner.

This Australian bird is best known for its distinctive iridescent wing patches that, in dull light, appear bronze or green-brown, but flash in many bright and wonderful colours in the sunlight.

Like the frillback pigeon, the Jacobin pigeon is a strain of fancy pigeon that has been selectively bred for its eccentrically feathered hood.

Like its close relative, the Victoria Crowned pigeon, this breed is characterized for its blue, crown-like crests. It is also found in rainforests across New Guinea.

Another breed of fancy pigeon, the elegant Indian Fantail was selectively bred for its distinctive fan-shaped tail. Their feet are feathered and, as their name suggests, they originate from India.

This vibrant pigeon can be found in several countries across Africa and is known for its unusual green, blue, and grey plumage.

Affectionately nicknamed as the “punks of the bird world", the Spinifex Pigeon is an Australian bird known best for its unusual, mohawk-like pointed feathers.

This domesticated pigeon is known for its eccentrically colored plumage and fanned out tail… And, to make them even better, they are known for their tame and placid nature.

While these might be some of the most stunning pigeons you've ever seen...

The cutest pigeon has to go to the Curly Frillback. Just wait...

When you think of feathers, curls don't automatically come to mind...

Yet these pigeons have some incredibly curly feathers.

These frillbacks are considered "exhibition" or "show" birds.

They aren't your regular street birds.

Frillbacks are the result of selective breeding over centuries.

You'd think that these birds wouldn't be able to fly.

However, it is only the top layer of wing feathers that are curled...

The base feathers allow the birds to fly perfectly fine.

Although they don't really enjoy flying that much.

Charles Darwin reported that "frillbacks tend to enjoy walking around and wandering into places they shouldn't be."

Which is pretty much the same as a dog really.

And they've become household pets for many bird enthusiasts.

I for one would love to see these little guys wandering around my neighbourhood.

Keep scrolling for another adorable bird that looks just like a little cotton ball! People are going crazy for them...