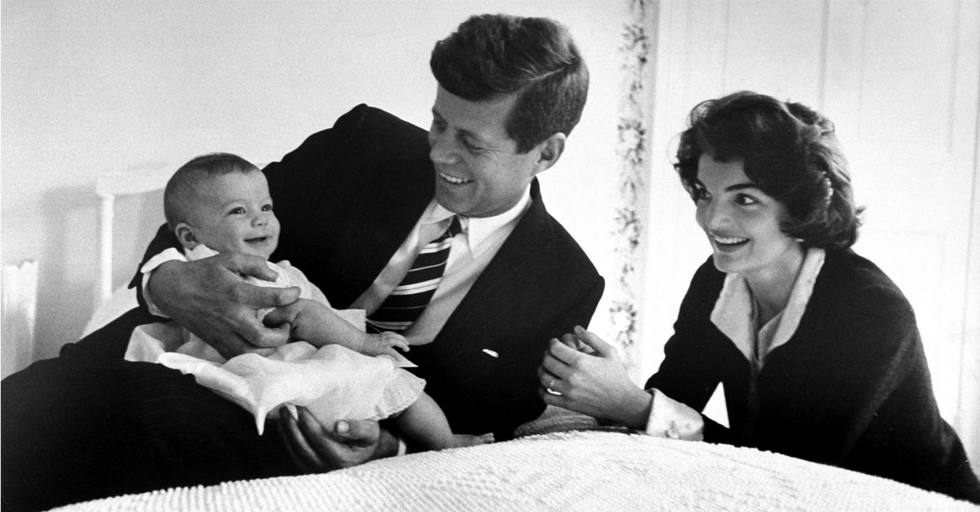 We might not have a royal family in America, but we do have the Kennedys, and they’ve had enough drama to make your head spin.

Between plane crashes, secret affairs, and mystery ailments, the so-called “Kennedy curse” could very well be a real thing. Or is it just bad luck?

Keep reading to uncover 20 unexpected facts about this far-reaching family.

After he was killed, she refused to take off the blood-stained suit, and only changed out of it once she returned to the White House the next morning.

When she was 23, Rosemary’s father, Joseph P. Kennedy, Sr., had the lobotomy done as an attempt to calm her mood swings and occasional violent outbursts. The procedure was not successful and left her permanently incapacitated. Her family kept her out of the public eye, and the truth about her condition didn’t come out until over 40 years later.

JFK was rumored to have had affairs with many women.

During his 10-year marriage with Jackie Kennedy, he was reportedly involved with Marilyn Monroe, White House intern Mimi Alford, and other women. Jackie was said to have known about the affairs, and even had a few of her own.

Jackie Kennedy was offered $1 million to stay in her marriage.

In a biography by Darwin Porter and Danforth Prince, the authors detail how Jackie wanted a divorce before JFK took office. His father, Joe Kennedy, offered her the money to stay put.

JFK was sure to stock up on cigars before an embargo.

In 1962, President Kennedy enacted an embargo on Cuban trade—but he was sure to get his hands on a stockpile of 1,200 Cuban cigars before it went into effect. On the next page, learn about JFK’s three near-death experiences before his presidency.

As a Catholic, he received the last rites three times: in 1947, when he got sick on a boat trip from England to the US; in 1951, when he got a dangerously high fever while traveling in Asia; and in 1954, when he went into a coma after a spinal fusion surgery. His fourth and final last rites were given the day he was assassinated.

When the First Lady met Khrushchev, she asked him about the dogs that the Soviet Union had launched into space. A few weeks later, he sent her a crate of puppies, which were the babies of of one of the dogs that had returned safely from space.

Robert Kennedy made an accurate prediction about Barack Obama’s presidency.

During a 1968 interview, he remarked that JFK was the first Roman Catholic president, and said, “There is no question about it. In the next 40 years a [black person] can achieve the same position that my brother has." He was correct down to the year: 2008.

Ted Kennedy had a brush with death soon after his brother’s assassination.

Seven months after JFK’s death, Ted was in a plane crash that killed two people, including the pilot. He walked away with three broken vertebrae, two broken ribs, and a collapsed lung.

JFK had many secret health problems.

He suffered from scarlet fever, whooping cough, Addison’s disease, and chronic lower back problems, but his medical records were a fiercely guarded secret, even after his death. Keep reading to find out what the Kennedys have to do with a musical.

Jackie Kennedy compared her husband’s presidency to the musical Camelot.

She referred specifically to these lyrics: “Don’t ever let it be forgot / that once there was a spot / for one brief shining moment / that was Camelot."

JFK’s back brace may have been a factor in his death.

The first gunshot went through the back of his shoulder, and should have caused him to slump over in the car and perhaps avoid additional gunfire. But the brace, which he wore to help alleviate his back pain, kept him sitting upright as a target for the subsequent shots.

Taylor Swift has a connection to the famous family.

In 2012, she dated Conor Kennedy, Robert Kennedy’s grandson. No word on whether she’s written a song about him, but she did say she was starstruck meeting Caroline and Ethel Kennedy.

The devices captured nearly 300 hours of conversations in the Oval Office and Cabinet Room, some of which were scandalous (though not Nixon-level scandalous!).

JFK wasn’t into the Space Race.

Instead of racing with the Soviet Union to get to the moon, he proposed joining forces and pooling resources with them. His plans didn’t pan out, as he was killed two months later. On the next page, a creepy premonition shared by JFK and Jackie.

John and Jackie Kennedy both worried that their son would die in a plane.

JFK often worried that his son was reckless. Meanwhile, Jackie forbade John Jr. from getting a pilot’s license, but he did so after her death. Their premonitions were correct—he died in a plane crash en route to a family wedding.

Kathleen “Kick" Kennedy was the black sheep of the family.

She was a bit of a rebel, and angered her parents when she got engaged to a Protestant (rather than a Catholic like the rest of their family). When she too died in a plane crash, only her father attended the funeral.

When he was traveling Germany as a 28-year-old, the future president wrote in a diary that Hitler “had in him the stuff of which legends are made" and that he would “emerge from the hatred that surrounds him now as one of the most significant figures who ever lived." Not a good look.

The public and press often referred to him as John-John, but no one in the family called him that—and he actually hated the nickname.

Jackie Kennedy was addicted to nicotine.

She had a three-pack-a-day habit (that’s 60 cigarettes a day!) for 40 years. Be sure to share this story with a friend who’s fascinated with this infamous family.